I am an amateur composer.

Page layout is important to me; I like the line breaks to be significant punctuation to the score.
i.e. the end of: sections, parts, phrases, lines of verse/lyrics, are all good places for a line break.

When composing a piece with an anacrusis this is not so straight forward.

I have adopted the practice of splitting measures midway through as can be seen in the below example:

(In my favourite scorewriter (LilyPond), this is simple to achieve.)

I've never seen this done before so I suppose that my questions are:

It's great that you're thinking about where your line breaks should go, and putting them at natural "punctuation" points is generally a good idea. Breaking mid-measure though is pushing this too far. While it may fit the phrase better, it's a bit disrupting to read. Experienced musicians are very good at identifying phrases, especially when they're 4 or 8 bars like this, and the existence of an anacrusis doesn't disrupt this identification at all.

Mid-measure breaks are sometimes used in professional scores, but usually only when the length of the measure (either the number of beats, or when a measure gets stretched because it's full of 32nd notes) leaves no other good option. It should be thought of as a last resort.

What you're doing is doubling up on the phrase marking, which is there just for the purpose you propose. Is there any extra point in breaking up bars? Not for me. It seems an amateur thing to do, as the phrasing marks already do the job. Even without phrasing marks, most musos would be able to translate how the line of music should scan, and for me, looking at the next line for the rest of a bar doesn't help any flow, it hinders it.

I would consider breaking measures like this, but only when:

In these circumstances you have to put the end-repeat :| bar line one quarter note before the end of an actual bar. I've seen this in some of the Bach and Handel I've played.

As already noted, if the bar contains lots of 16th or 32nd notes, or a cadenza passage, and starts towards the right-hand end of the stave, you might consider breaking the line like this. I've seen this too, but far less frequently.

I've also seen old hymn books which have this style of layout. Very often any eighth notes are not beamed so it's missing the visual cues you expect from modern, thoughtfully typeset music.

So it's not completely forbidden, but it should be the exception rather than the rule. In general, I think it's best to avoid anything that will make your reader go "Huh?" when they see it. The music should be as clear as it possibly can be.

There is a convention that scores for music theater (particularly on Broadway) are always written with four bars per line. Of course that only makes sense because the music is rhythmically boring with nothing but four-bar phrases!

It does boost the wages of music copyists whose union rates are per page, not per note. More empty space on the page means more money, but that's a digression.

Even then, bars are not split up at an anacrusis. In general this simply doesn't work. In the OP's example, if the bass player has a single note for the whole bar 4, how do you write it? If you put it at the end of the first line, there is an empty space at the start of the second like which looks like a mistake. If you split the single note into two notes tied together, that is making the notation more complicated without a good reason.

You don't see printed books where every line ends with a punctuation mark either, for the same reason.

Is this a good practice; is it breaking any engraving guidelines or rules?

Oh, yes, this would be a good practice. It helps to understand the musical structure and would support to learn a piece by heart.

Would musicians reading such a score, prefer this technique; or does it impair readability/functionality?

This may be opinion based and individual. But it would help to read and interpret a song and composition, and the most phrasing bows would be superfluous.

Are there other professional scores that also follow this practice?

look up a church choir book or a song book: you'll find this break when ever it was possible.

In a solo album and concert sheet music the layout doesn't show this structure. The main purpose is to save space and paper! But today in digital settings could help to keep the structure and emphasize the formal aspects of an musical artwork (where it exists!)

I prefer the line breaks that show e.g. the up beat. I think modern digital layouts of music writings should much more respect the poetic aspect of a composition showing the verses and phrases. Of course a musician is able to recognize the phrases but if we consider that a song is like a poem an artwork the note lines should be set analog to the text

It's a bit unconventional, but it can work.

About three years ago someone brought to my viola da gamba trio an In Nomine by John Bull. It was handwritten and had loads of linebreaks in the middle of bars, or three-quarters of the way through a bar, or wherever it wanted to have a linebreak.

To start with we thought this was very strange and we really struggled with it. I actually went as far as to write the two complex parts out without this feature (the cantus firmus was fine, consisting largely of one note per bar). And then we found that it was harder to read with line breaks only happening at the bar line, because the line breaks were on phrase boundaries, and the spacing the original editor had used really helped once we got into analysing the music and playing it according to its real structure, not just the one imposed by the bar lines (which, as usual in consort music of the period, one should largely ignore and may not have been in the original notation anyway).

So in conclusion I'd say it can certainly help in some cases, regardless of whether there's an anacrusis or not, but you're probably going to confuse some people who sit down to try to play it - at least until they figure out why you did it.

This is common practice in strophic songs and hymns. But it's invariably notated with a double barline at the line break, not just an open end. 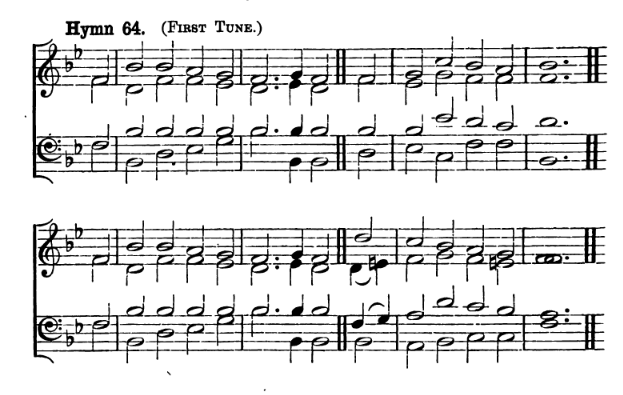 Not the answer you're looking for? Browse other questions tagged theory notation sheet-music engraving anacrusis or ask your own question.

5
Are whole and half note rests supposed to only be written on specific lines?
5
Why is this Fermata over a double bar line?
3
Imaginary bar line fixed
4
How to disable or limit compression of over-full pages in Lilypond?
8
When does bar-line go down?
5
Bar lines in wrong place after removing staff lines
4
Dotted bar lines of different height
1
Repeat bar lines in early music
6
How can I omit breaks and page breaks in LilyPond?
4
Bar lines in lilypond