How would these chords from “Christmas Time Is Here” be analyzed? 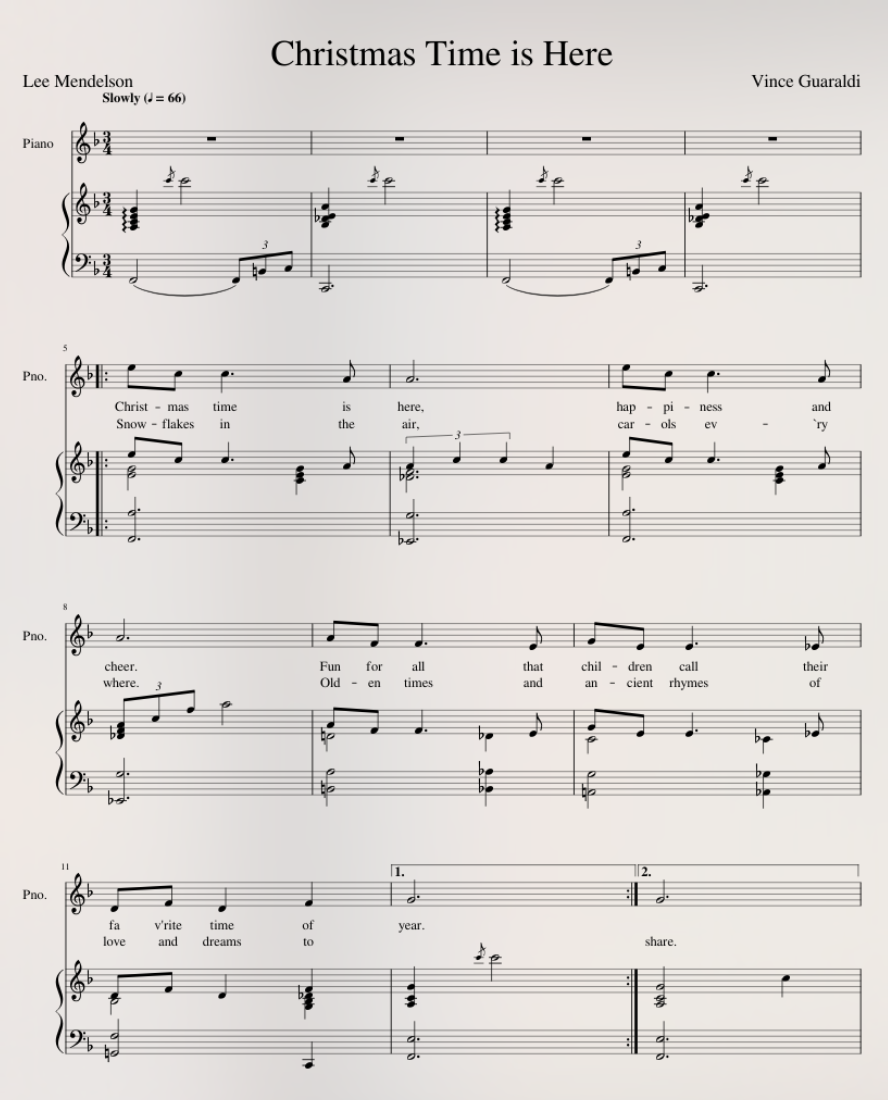 I'm wondering how to go about analyzing some of the chords from this piece. I have a lot of tonal harmony knowledge, but am a little limited in my knowledge of jazz theory. However, I'd love to hear any analysis you may have.

Specifically, I'm wondering about the second chord (the Eb9#11) and the first chord of measure 9 (the Bm7b5). I'm trying to figure out how these chords are functioning in the piece and how they could be analyzed. It sounds so smooth to listen to, yet I can't seem to come up with a simple explanation for them.

Any ideas are greatly appreciated. Thanks in advance!

There are many plausible ways to see the chords, and all of the interpretations are equally true at the same time.

As a dominant there's a Bbm6/C, which sounds like a variation of the Eb9#11, it's just a notch closer to a plain vanilla C7.

IMO it's best to analyze jazzy chords in terms of a set of things you can do with the chord, and not try to come up with "it is a ... blah blah chord" sentences. The "is" sentences just don't cut it. Each chord is what it is, many different things but none.

To "understand" chords like that means, in my opinion, that you can see the possible different interpretations at the same time, and you can use the chords in the different roles in different contexts. It's like with borrowed chords - you have to see the other parallel interpretation from which you borrow. And you have to see the Dm in the Bm7b5, otherwise you don't understand the chord. Chord symbols are just a shorthand notation for groups of notes. The written root note of the chord symbol doesn't necessarily have to be the be-all-end-all definition of functionality like it's in simple traditional functional analysis, because there are multiple plausible functional stories in parallel. In "Bm7b5", sometimes the "b5" can be the most important note.

The song is in F major, so that E♭9♯11 chord is really just an altered ♭VII chord. In music of this style ♭VII is often used as a type of dominant, so measures 5–8 just alternate between tonic and this dominant substitute.

As for the Bm7♭5 in m. 9, ultimately it's the start of a larger sequence: notice how m. 9 just moves down a step into m. 10, which then moves down a step for the beginning of m. 11. This sequence ends on the downbeat of m. 11 with a G7, which is just a V7/V in the key of F. So I would view that Bm7♭5 as just the beginning of a sequence that ultimately leads to that V7/V.

Not the answer you're looking for? Browse other questions tagged chords chord-theory jazz analysis chromatic or ask your own question.

6
Are these “power chords” in a classical composition?
1
What is the music theory behind the ending to this Chopin Etude?
5
Can this note be analyzed as a non-chord tone?
1
How can one analyze this chord progression from “Vienna” by Billy Joel?
2
How can the intro to the song “If I Fell” be analyzed?
1
Is there a term for chords where a Roman numeral would be considered meaningless?
2
Understanding Cm7-F7-F#Maj7-G# progression
5
How would this chord from “I'll See You In My Dreams” best be analyzed?
2
What are these chords called?