Do all 7th progessions sound good as triad progressions? [closed]

Ask Question
Asked 4 months ago
Active 4 months ago
Viewed 1k times
2
Closed. This question is opinion-based. It is not currently accepting answers.

It depends on the style of music you're talking about, but the immediate answer that sticks out to me is the diminished sonority.

This would thus be a clear instance that would answer your question in the negative: if you had a score that used a fully diminished seventh chord in root position, you wouldn't want to remove that chordal seventh without also changing the subsequent diminished triad to first inversion.

If you are treating the harmony as voices with voice leading, then just dropping the sevenths from the chords may result in various parts with gaps in the lines. 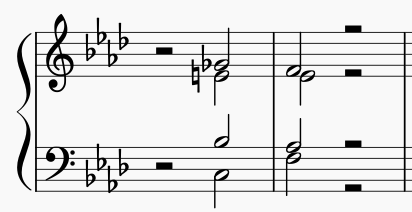 Omit the sevenths and the alto and tenor have gaps (rests) in the lines... 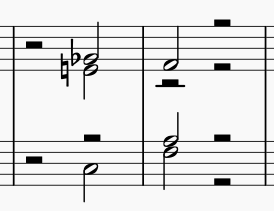 Re-arrange parts for only three voices... 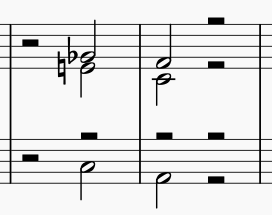 ...but strictly speaking that is a new progression, at least from a voice leading perspective.

Here's a chord progression that doesn't work if you leave out the 7ths:

But then again, you could rewrite it as triad+bass

So, the answer to the question is: no, not all 7th progressions sound good if you drop the 7ths, unless you re-think what the essential triads behind the chord progression are.

But is there a chord progression that cannot be reduced to four voices while keeping the essence of the original?

A good example would be V7 of IV. Without the 7th, people will tend to hear it simply as the tonic. If it then moves to IV, it will just sound like a I IV progression, not the resolution of a dominant.

One way to think about 7th's is that they're 'flavor' to a chord. If you think about it that way, it's basically, "Will removing this bit of flavor hurt?" - and that answer depends quite a bit on what you're removing it from.

... would the C7's missing a Bb in the background mean much? Eh, not really. Likewise, someone throwing an F into the G chord to make it G7 isn't going to make much of a difference.

But what about this common chord progression, from songs like 'Till there was you' / 'Man or Muppet' / 'You're just too good to be true':

... that flavor is incredibly important. First off, it's separating those chords into something different each bar, giving the chord a progression instead of the same chord repeated for several bars. And it's got an important voice perspective: it's a C, descending to B, to Bb, and finally into the A that's part of the F chord. Try playing a C triad for the first three chords when singing along to one of those songs, and you'll quickly see that there's something missing.

Likewise, the 7th can provide valuable context information about the chord. The easiest way to see that is to take a diminished chord. Imagine playing the triad: C + Eb + Gb. The problem is, that actually could represent three wholly different things, depending on whether Ab, A, or Bb is added to the mix:

Or how about the first bit of the very first, very recognizable Mario Brothers theme?

... try plucking those chords out on a piano... and them simplifying it down to just the D and G triads. It'll go from sounding like an immediately recognizable start to a familiar song... down to a simple chord resolution.

18
Uses for augmented chords in composition
9
Is there any theory to decide a set of plausible chords per measure where a whole melody of a song is given?
3
Non-diatonic chord?
6
Rules of how the bass should (and should not) move in chord progressions
10
How do you write successive, non-functional chord progressions?
2
Chords derived from uncommon scales
13
The Chords in this progression sound great but don't belong together - so why do they work?
1
Chords with different bass and non-diatonic chords inside a progression
2
added tone chords