I'm planning on using a diminished 7th to modulate out of Eb minor and into Eb major. I'm thinking of using this diminished 7th or one of its enharmonic equivalents: 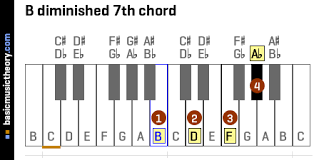 This chord could then resolve to C minor and I could use that as the start of my modulation to Eb major. But, I have run into a bit of a problem. You see, I have been using the key signature of Eb major for the whole piece. And this causes a problem because B°7 makes more sense with the key signature while Cb°7 makes more sense with the key. I have no idea which one to use. Unlike with the key of C minor, the diminished seventh chords only match in audible pitch, not in notation.

So, what if I match with the key signature of Eb major, since that is the key I am modulating to? Well, then I would use B°7 which would be notated like this in the key of Eb minor, regardless of key signature:

Not that bad, 2 notes, the fifth and the seventh, wouldn't need accidentals at all and the root and third would only need a natural.

Now what if I match with the key of Eb minor? Well then, I would use Cb°7 which would be notated like this in the key signature of Eb major:

Just going crazy with the flats here. I mean, every single note has an accidental, the root has a single flat, the third and fifth have double flats, and the seventh, well it has a triple flat. Triple flats can't be notated in Musescore, so the best I could get is turning the Bbbb into an Ab, and then, well, I don't have a diminished seventh anymore, I have a diminished sixth chord, whatever that means(diminished triad with a sixth on top).

So, should I use B°7 to match with the key signature and avoid the triple flat? Or should I use Cb°7, even though with Musescore, I have to notate the seventh as a sixth? Or should I change the root and use D°7 and resolve that to a vi6 chord?

Use the notation that shows the immediate resolution. Since you're immediately moving to a C minor chord, this fully diminished seventh chord is the leading-tone seventh of C minor, and therefore it should be notated as B diminished.

And one other side note: the move from E♭ minor to E♭ major is better understood as a change of mode, not an outright modulation (which would imply a change in tonic pitch). If you want a quick way to change to E♭ major, simply resolve to a major tonic chord and progress from there in the major key. You'd join legions of composers that, for centuries, have done just that!

As Richard said, spell the chord as it will resolve. If it's a leading tone chord resolving to C minor (i.e., functioning as viio7 of C), then the "root" of the chord is the leading tone to C, i.e., B. Thus, spell the chord B-D-F-A♭. If your key signature is E♭, then obviously you'll need to write B♮-D-F-A♭.

I'm really not sure in the question what "matching the key" means. Fully diminished sevenths should usually be spelled by how they resolve, spelling the leading tone as the appropriate semitone that would lead upward toward its resolution. Thus, if the key is E-flat major, but you're writing a viio7/vi (i.e., that resolves to C), you still spell it as above, i.e., B♮-D-F-A♭.

As you bring up viewing D as the "root," you'd do that if you were resolving instead upward as a leading tone to E♭. In that case, you could use a spelling of D-F-A♭-C♭ to resolve to an E♭ major or minor chord. But the spelling of the diminished seventh doesn't change based on the inversion of the chord it resolves to. If you're resolving to C minor in first inversion, you still have B as your leading tone, so it should still be B♮-D-F-A♭ in that case, though with D as your bass note. (The bass note of the diminished seventh is irrelevant to the spelling -- what determines the spelling is which note is the leading tone, whether that note is in the bass or not.)

The C♭ in E-flat minor is irrelevant to spelling a diminished seventh, unless it's acting as a leading tone. (And I don't see how that spelling "matches" the key when three of the four notes of the chord aren't spelled that way in that key.)

To be clear, spelling a chord as C♭o7 makes little sense within any standard key. That implies that C♭ is a leading tone, which means that it would resolve upward to D♭♭. You would only spell a diminished seventh as C♭-E♭♭-G♭♭-B♭♭♭ if the chord were resolving to, say, D♭♭-F♭-A♭♭ (major) or perhaps D♭♭-F♭♭-A♭♭ (minor). As I'm assuming you're not trying to do that, please don't spell a chord that way... ever.

Yes, when diminished 7th chords are used for modulation - when they are the interface between TWO keys so could be said to exist in both those keys - spelling will have to be a compromise.

Of course a triple flat should be avoided in anything except - just possibly - an academic illustration!

(What a complicated route to the tonic major! Just lead up to Ebm but use Eb instead. The sun will shine! Anything else will merely reduce the impact.)

Why make a choice? You can always copy Beethoven (from Op 106).

There's no sense in writing something easy to read when you can make it more complicated, even if you aren't really going to modulate at all :)

(BTW if you just want to modulate from Eb minor to Eb major, you only need two chords: Bb followed by Eb. Done.)

Not the answer you're looking for? Browse other questions tagged notation harmony chord-theory or ask your own question.