acceptable to use same finger for 2 succeeding notes in this case? 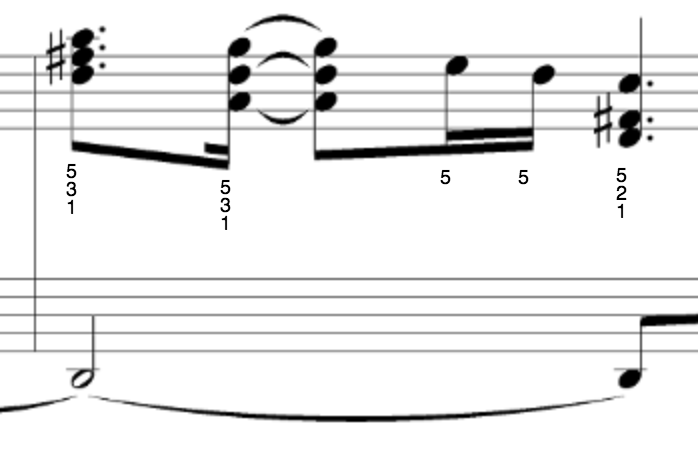 I'm very new to piano playing so please forgive me if this is a dumb approach.

I know that you should not use the same finger for succeeding notes, but here is my personal thinking(without having read any books), I'm thinking that whenever I have a chord and there is a note in front of it, I would play that note with a finger setting up the upcoming chord with the least amount of hand movement, so for RH, if I'm playing an A before a C E G chord, I would play the A with my pinky finger I would need the least hand movement to play the C major chord, if I play the A with let's say thumb, I would have to shift the right hand a lot more to the left to play C E G.

So for this case right here, I want to play the D before the final D F# C chord at the end with my pinky, so I would need minimal shifting for the final chord, but there is an E before the D, if I play that with my pinky, I would have to play D with my ring finger, in which case the shift needed is now greater.

So I was wondering if I can do 5 and 5 to setup the final chord in this case?

(update) I have since realized that this was completely dumb, like what if there are 10 of these notes in a row? Just same pinky 10 times? Ya I don't know why I thought that was a good idea ...

Repeated chords are an obvious case where you must repeated strike with the same fingers. I have also seen some examples of playing consecutive intervals like sixth with repeated fingers. But, on the whole you change fingers as the rhythm unfolds.

After that basic concept, I think in terms of position shifts and finding tactile reference points.

The fewer position shifts the better.

When you must change positions make the change relative to some finger that's already in place. The common example is "passing the thumb under" when playing scales. Like playing C major ascending in R.H. first you play 123 then the thumb gets placed on the right side of 3 and continues 12345. When that first 3 is down you of course know where it is, it's on E. So, just put 1 on the other side, on F, and keep going with each finger. You're targeting adjacent tones.

Another good reference point is common tones. When a tone is common to two positions it's a good idea to use it as a reference point. Basically, you will just replace one finger for another on the same key to make the position change.

This what I came up with...

...there are only two position changes.

The second position shift is the tricky one.

Red lines are the tricky changes. 1 has to extend down a fourth, but that is mitigated by the two easy changes above it. Moving 3 to 5 for adjacent tones isn't ideal, but I kind of like the final movement to the D7 with no position change. An alternative is...

...for the last three which is what @Jomiddnz suggested.

1
How to sight read piano sheet faster in any key?