Can I transcribe accoustic piano in a DAW [closed]

Ask Question
Asked 8 months ago
Active 2 months ago
Viewed 167 times
5
Closed. This question is off-topic. It is not currently accepting answers.

I'm looking for some software that can transcribe my accoustic piano playing into notation so it can be written down and played back. It's okay if the software can only notate simple one voice music. This is mainly so I can record one voice, play it on loop and write other voices.

Melodyne can detect the individual notes and save them to a midi file. For Piano you will need at least the Editor version, which is the lowest version that supports polyphonic audio (multiple notes played together as opposed to a flute that would only play one note at a time). 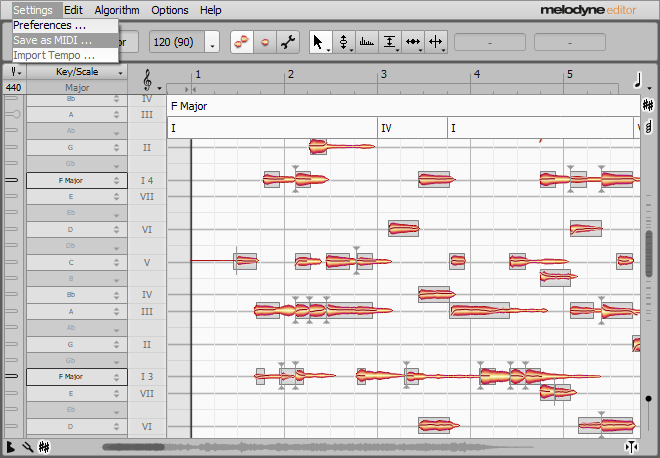 From the editor version on it can also detect the tempo. I have yet to figure out how to correct it though since in my case it does wired things like stretching the original audio and starting bars on the wrong beat... but if you just want to export midi, those issues would be easy to repair in a midi editor after exporting.

Ableton Live has quite nicely working audio-to-MIDI facilities, for melody-to-MIDI, harmony-to-MIDI and drums-to-MIDI. Check out examples from Youtube. And there are separate plugin products like MIDI Guitar 2, which is incredibly good. And if you want to write songs, why not record your acoustic piano as an acoustic piano? Many song writers record their acoustic guitar to whatever answering machine they happen to have.

It depends on your workflow. Finale could do it. Or if you want a DAW to do it I would recommend Reaper; it has a scoring notation tool in the DAW that is good enough.

If I were doing it I would, in my opinion, play the music into Reaper DAW. Reaper can put your playing into its scoring tool which is exportable to Finale as well if necessary. I am not sure if this is a problem with an acoustic piano; I am more used to midi keyboards.

The sad truth is that transcription software only does a (reasonably) good job on input that it would be quicker to do yourself by hand and ear. And if you COULDN'T do it yourself, how will you know whether the software has got it right?

The results of wave to midi programs are pitiful. You better buy a cheap midi-keyboard and record the midi data by any midi-notate software. What you might also look for is a midi-sequencer software.

As you know this site is not meant to make recommendations for software. But as your question is interesting and relevant for other users I was trying to find more information.

I've found the following answer to a similar question in redit:

Melodyne has poly tracking ability. Not going to be great on super variable and harmonically rich content, but can work.

I have the polyphonic version of Melodyne and it's pretty amazing. I used it mostly in Sonar where its ARA integration means you can literally just drop an audio clip on a MIDI track and it will be replaced with a MIDI clip. Now I use Reaper and although there's no ARA integration yet, it's coming soon.

However the technology is not yet perfect, and I'm not sure that it ever will be. There are loads of things that can trip the algorithm up - most commonly, it will mistake harmonics for fundamentals. And the accuracy of timing depends on how distinct the transients are, although Melodyne is very intelligent and I think it understands concepts like a note's "musical start" not always being the same as the physical start of the sound. Additionally, you might sometimes be frustrated by the velocity values that Melodyne has given the notes. Basically, with any conversion tool like this you're going to have to be prepared to go into the MIDI and correct a few errors before it's a good match, depending on the complexity of the content. But on the other hand, there have been times when I've been able to use Melodyne's MIDI straight out of the box with no editing or adjustment.

One thing you might try to improve the conversion process would be to whack a low pass filter on the signal before it hits Melodyne. If you set the filter low enough so that it's just a little higher than the highest note in the piece, you will be getting just the note fundamentals and cutting out most of the kind of harmonics which confuse Melodyne. Admittedly I've never tried this filter trick myself, although I have had success in turning down the tone pot of my guitar before recording something I wanted to convert to MIDI. The darker the sound, the easier it is for Melodyne.

Not the answer you're looking for? Browse other questions tagged composition daw or ask your own question.

12
Is there a computer program to transcribe songs to sheet music?

17
How can I improve my piano accompaniments?
11
Is there some trick for counterpoint beyond 2 voices?
7
How to get started recording music with Reaper?
2
Beating 'Blank Page Syndrome' and Projecting Intent
2
How to be fluent in music writing
2
Looking for software to combine notation and recorded loops
1
Advice for figuring out unusual rhythms when composing
2
Using a DAW as a pure multi-channel playback device
3
How can I overcome this difficulty?