I just exported a Piano score from Sibelius with a swing feel:

I wanted to edit the MIDI in my DAW and noticed, that the notes actually weren't in a triplet duration. The second note was always off the triplet grid:

So I went back to Sibelius and searched for the reason. I noticed, that in the playback options, it gives the first note a duration of 61,7% and the second one 38,3% 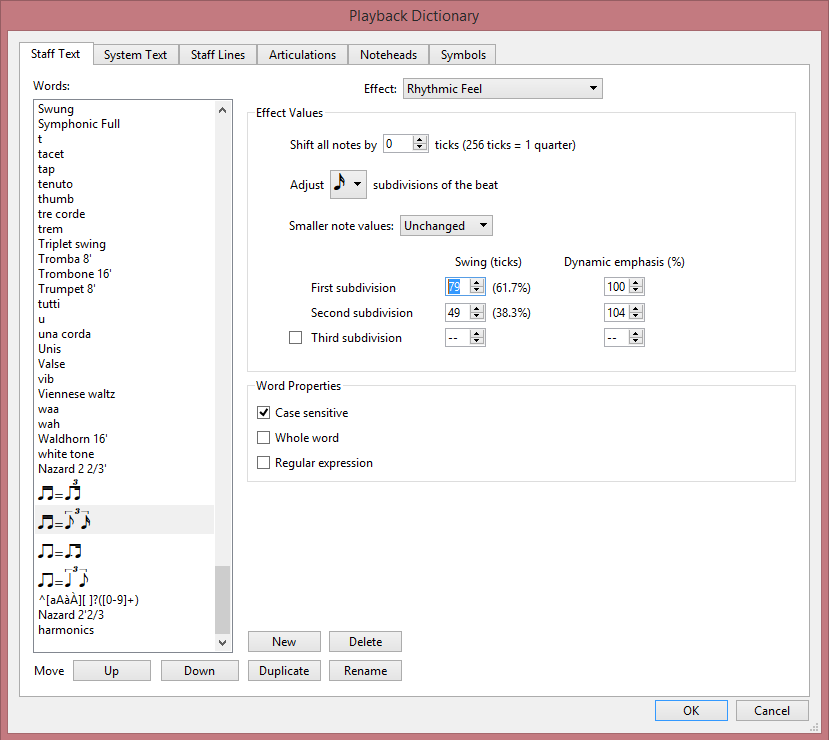 So my question is... Why would this be the default option?

Do you really play the swing feel like this. If the metric modulation is notated like above, shouldn't be the note duration actually 66,6% and 33,3% instead?

If you study the timings of human players, you will notice that they almost never play mechanically exactly what the theoretical written values would be. Timings, pitches, dynamics, everything. Musical notation is a means of written communication about musical ideas from humans to humans. It's meant to be subjectively interpreted by a performer.

Exact triplet swing tends to sound awkward, and the faster the tempo is, the more you have to straighten out the swing.

Why it's the default - maybe they listened to the 66.6/33.3 swing and decided that it didn't sound realistic? I think all of the things in the playback dictionary have been adjusted so that it would correspond to how people would actually play it. Another example is the note length percentages for normal vs. tenuto - I think it's just based on trying out different things and adjusting to taste.

The meaning of the metric modulation marking is actually explained in the Sibelius manual: (from version 6.2. Sibelius Reference)

I cannot provide any statistics, but in my experience the symbolic metric modulation marking is more widely understood than the English word "swing". And "swing 16ths" or "swing 8ths" would be even less widely understood... The symbols are a way to communicate the idea of swing without using English, even though there's the possibility of misunderstanding it to mean "to be played as triplet swing with machine-like mechanical microscopic accuracy".

To remedy the situation and cater for the microscopic interpretation - which might be becoming more and more common now that people experience life and communicate with each other through computerized filters instead of directly - it might be possible to use the "almost equal to" sign instead:

The downside of starting to use this would be, it would be contrasted with the old symbol, and it would enforce the incorrect interpretation of the old symbol as meaning "robotically precise triplets". Which usually isn't the original intention.

Perhaps the better alternative would be to educate the microscopic precision folks about the actual real-life use of the metric modulation marking? :)

FWIW, the metric modulation swing marking in Sibelius 6.2 seems to produce a swing of about 60% when exported to a MIDI file. Here it is imported to Ableton Live, and the background is set to triplet grid.

The swing isn't 66.6%, the length of the downbeat notes isn't precisely 100.0%, the notes don't have the same velocity...? That's because they specifically tried to program the Sibelius application so that its MIDI output would be close to a human player's interpretation of the notation.

"Swing" only means "play exact triplets" in software where the authors didn't know any better.

For humans it depends not only on the genre of the music but also on the overall tempo. It can mean anything from only just over 50%, up to 75% or more.

If you include Viennese waltz rhythm as a sort of swing, the first beat is shorter than its written duration, not longer.

One of the minor crusades of my musical life is persuading people NOT to use the 'metric modulation' notation when they mean 'Swing'. Swing covers a range of 'Notes inégales' but almost always isn't triplets. Sibelius playback recognises the word 'Swing'. So do live musicians. So does everyone, except some educators who seem frightened of the concept and prefer the precise but inaccurate 'metric modulation'. Don't do it!

However, Sibelius is not 'reading' the metric modulation directly. It's looking up that string of characters in the Playback Dictionary and performing whatever function has been assigned to it. And that assignation can be completely arbitrary! It would be quite possible to assign that metric modulation text string to 'Instrument change to Violin' :-)

In this case the programmers haven't been so mischievous! But they HAVE recognised that misguided composers often use a triplet when they want Swing. So they've made it provide something closer to swing. It's a nebulous concept, but we can be pretty sure that, at a medium tempo, Swing ISN'T triplets.

You can edit the definition if you like. But I expect if you'd WANTED triplets, you'd have written them. Or used 12/8.

The question posted above poses a simply logical question : If the notation is accurately defined in the marking, - ie. 'duplet = triplet', why does the software not obey the clear terms specified? Fact is, if we write exact values, the software should honor them, especially in a function relating to metric modulation. That is, unless we use an interpretive function, such as the swing (as opposed to 'straight') option on whatever program we use. Then the software can interpret the swing according to its default percentage settings, and the composer has the right to alter those settings according to their sensibilities. One is exact replication, the other is approximated interpretation, and both are valid or invalid according to individual intentions and purposes, as is the case in comparing the functional purposes of 'Tempo giusto' to 'A piacere' or 'Rubato' in classical performance. A default fixed percentage of swing, no matter how perceived or preferred by software creators, is just that - fixed, not variable!

Now, back to our actual question : I am also a classically trained composer, and I use MuseScore to notate my work, jazz or otherwise. I do not use the swing function, because I am aware of the nuances inherent to different swing subdivisions, and because I want those to be accurately presented in my scores, to whatever extent practical, not to be limited to what a software company might try and dictate as being the best/most commonly accurate/most natural etc. Therefore, many of my charts, at the very least, involve a mix of triplet and semiquaver swing, and straight quavers/8th-notes, and some are theoretical charts presenting material demonstrating the logically available spectrum of unique swing divisions. When you become aurally aware of that spectrum, you become consciously able to identify the difference between a {2-1} swing, and a {5-3}(62.5%), or {7-3}(70%) swing. Knowing that, and writing like that [ie. - with microscopic precision] is way closer to natural than a fixed default, which will not transfer acceptably across tempo or style changes, let alone from section to section, bar to bar, or phrase to phrase. So, unless you perpetually groove with the one default setting, I'd say avoid them, unless you can apply them at any point in a score.

Finally, what is 'swing'? Ah, just go and practice your triplets for now folks.

I'm pretty confident that, to the average user of composing software, the colloquial Western term, swing has been assimilated and understood sufficiently the world over, and would likely be more readily comprehended than the advanced theoretical, pseudo-mathematical term, metric modulation. Furthermore, since swing is categorically not metric modulation (although they can relate to each other), I would say that to conflate them is a fallacious misnomer, only serving to confuse issues.

2
Alternative ways of notating this example of metric modulation
7
How to clearly notate tuplets, both "simple" and "complex," in irregular meters
4
How to describe occasional non-swing eighth notes using swing notation?
2
How to write a Swing Rhythm using tabs?
2
Which modulation is correct? (amongst other things!)
10
How to interpret in swing a 16th triplet followed by an 1/8 note?
2
App doesn't swing 8th and dotted quarter, but does swing dotted quarter + 8th
3
What is the use of metric modulation?
8
Should I use 16th notes or triplets in swing rhythm?
0
Swing in eight notes vs triplets