Since the major scales and their relative minor uses the same key signature, how differentiate a major song from minor?

Below is a screenshot of a sample from musescore (the key signature is used for both Db major and Bb minor): 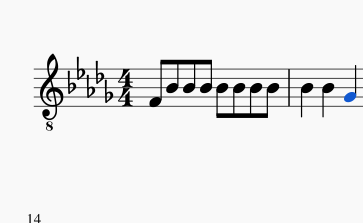 When a song is written in a major or minor key melodic line will typically accentuate the root of the key or one of the chord tones of the Tonic. In other words melodic ideas will seem to start and end on the sixth if the song is in the relative minor key rather than in the major. This is just one possible clue and can be tricky on its own as one can write clever melodies that have key ambiguity. For example, the 3rd of the Major scale is the 5th of the relative minor. The 7th of the minor is the 5th of the Major.

Chords can be deceiving. Take for example the Major 6 chord played on the Tonic. In the key of C this is {C, E, G, A}. The minor 7th chord on the relative minor (Submediant) is {A, C, E, G}. These chords are just inversions of each other. If you are playing Jazz it is very common to use substitutions to make progressions a little more interesting. For example I like to play All Of Me in the key of C maj but with the entire chord progression starting on A minor. It works, it sounds a little dark but I do NOT transcribe the melody to A minor and it works.

In classical music (and my extension many forms of modern music) the two key are not strictly identical. If a song is written in a minor key the melodies would necessarily include the leading tone. They would be based on the harmonic or melodic minor. This is the real clue in most cases. If you see melodies that do not contain the leading tone to the minor scale it will not have the classic cadence. A lot of rock music ignores this in my opinion but Jazz does not. To the point about chords, if the song is truly in the relative minor and respects the leading tone then you will likely see a Dom7 chord played on the 3 of the major scale rather than the expected min7. This is because of the leading tone in the harmonic minor scale.

In short, if it were in the minor key I would expect to see accidentals, specifically the 7th and 6th degrees of the minor scale. Other than that one piece of information may not be enough to distinguish the key but a collection of clues would do it. For example if the only chords are A minor and D minor and melody lines gravitate towards A, C, and E I'd call it A minor even with the absence of a G#.

Pieces can easily stray from major to relative minor on their journey, and vice versa.

The key sig. is only half the story. Listen carefully, and when the piece feels like it could end at that point, which we call 'home', then that probably is the piece's key. That can also be done by looking at the music and spotting the cadence points.

Another clue is that it's not that often the relative minor sticks to exactly the notes stated in the key sig. - which of course includes all the notes which don't need sharpening or flattening - they're implied within any key sig. That's why key C shows no ♯ or ♭.

The leading note in a minor key is often raised by a semitone, but that's not included in any key sig., unless it's Bartok! So finding Fx in your title's key sig. piece would usually mean the piece is in G♯m rather than B major.

Another obvious one would be to listen to the accompanying harmony. That's a great giveaway.

The same problem can occur in pieces that are modal. There may be a key sig. of one flat, but 'home' is G, thus making the piece in G Dorian, not either F major or D minor.

Not the answer you're looking for? Browse other questions tagged theory scales sheet-music or ask your own question.

33
When is a piece in A minor versus C major?