I'm a (not so experienced) guy and would like to try and learn a piece that has both a vocal part and a piano part. Since I'm a male, I think I need to sing the piece from the image I've attached (and other pieces with a similar range) down an octave. Is that standard practice for males?

If I do that, does that mean that I should also play the piano down an octave? On both hands? I'm asking because I hear that the melody is generally supposed to be the highest part (in order to make it stand out). But in the piece I've attached and others I've seen, bringing the vocal part down an octave would make it lower than the piano accompaniment's highest notes. And then I've also seen pieces where bringing the left hand of the piano part down an octave would bring it off of an 88 key piano entirely.

So, if I sing the melody line an octave lower, should the piano accompaniment change too? 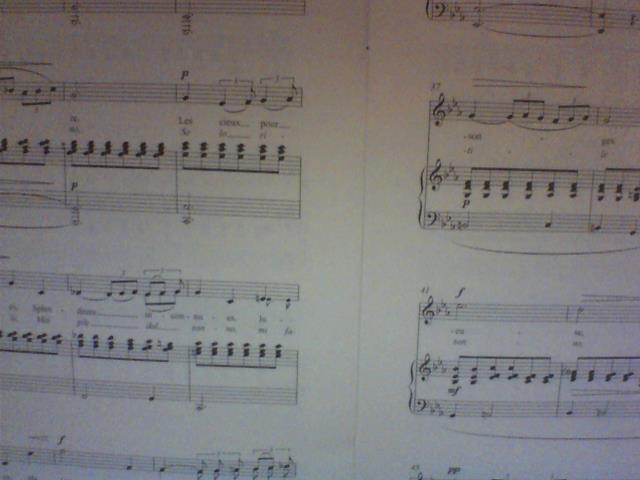 Basically no. The problem is that a piano has disharmonicity and particular overtones. Transposing a piano part one octave up makes it tinny and makes the bass notes not really register well as the building block of the harmonies. Transposing it down one octave makes the basses muddy like anything and the chords a heavy-impact mess rather than a harmonic framework.

It is interesting that the guitar (which is played one octave lower than it is written) will have its root notes and chords work out better for accompaniment at their actual pitch than a piano would.

There is also this thing with male/female formants that makes a male voice one octave lower than a female voice actually blend better with the overtones of the female voice.

So basically transposing the piano part down along with the singing is a bad idea both because the piano sounds bad as accompaniment in that range and because of the different character of male and female voice.

Even when assuming a duet voice played in the piano, the piano's octave for the sake of harmonising is less important than it would be for a continuous-tone instrument like a reed organ or violin because there is no sustained equality of volume, the piano being a percussive instrument.

No. Try it and you will see how awful it sounds.

There may be exceptions to this general rule, but they will be rare. In fact, it is common for song collections to be available in different keys for high, medium, and low voice. Were they specific to male or female singers, there would be twice as many editions, labeled for soprano, tenor, mezzo soprano, baritone, contralto, and bass.

Play the piano part as written.

In most song accompaniments (except in special situations like songs for young children, or where the player is meant to be leading the audience singing, etc) the accompaniment does not "double" the voice part, and it will work fine sung in either a male or a female voice range.

There may be a few exceptions to this in songs written in the past, where (1) the lyrics implied strongly that the singer could only be either male or female, and (2) LGBT was not yet a thing. But there is no "general rule" that applies to those rare situations - you just have to consider each song on its own merits.

Not the answer you're looking for? Browse other questions tagged piano voice sheet-music accompaniment or ask your own question.

7
My fingers are huge; how do I adjust on a piano?
9
common mistakes made when singing
18
If a piano song contains a melody line, should this be removed if we add the singer?
2
Question on evidence for singing bassline
2
How to access super high voice range?
2
Extension of lower end of the vocal range
2
Extend Lower Vocal Range
2
Common for vocal octaves to be not exact with written sheet music?
3
What is it called when the vocal parts move to the harmony above
5
Why does vocal harmony 3rd interval up sound better than 3rd interval down?