How to improvise over sixth chord in minor scale

Let's say I have this melody on the lead keyboard : 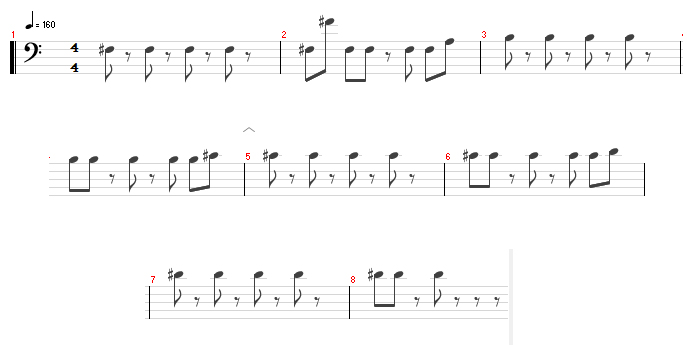 If I play this melody on the guitar, it reminds me of a simple minor scale in F# with a major 6th thrown in it.

However, I find it really hard to find a good improvisation line in the minor scale of F#, especially during the chords D#m and C#m.

I'm really confused with this, is that melody not in the scale of F# minor ? Why do I find this so difficult to improvise over ?

This scale is called F# Dorian. It could also be spelled as A Lydian (same notes).

All of the notes in your bass line fall into this scale (except the D natural), however the D#m chord does not.

Sticking to basic diatonic modes, you can use B Mixolydian (aka B dominant) over that D#m chord.

If you want to keep F# as your tonic, try switching from F# Dorian to F# Major scale over the D#m chord. F# Major is the relative major to D# minor, and would also help reinforce the chromatic ascension in your bass line.

If you treat the song as being in F# natural minor (a.k.a. A major; includes the D natural), then you could say the D#m is a type of modulation to a new section. In this case, the F# Major (D# minor) scale may indeed be the most appropriate choice.

Short answer: because D#m is in a different key. C#m may or may not be depending on the context.

Understanding the caveats of "rules are meant to be broken," "if it sounds good, play it," etc. my answer will be based on a fairly strict implementation of music theory so we can all attempt to keep our sanity.

Before we go on, I'd also like to take a moment to note that given the traditional construction of keys, sharps are added in the following order: F, C, G, D, A, E, B (You can see this demonstrated in the circle of fifths).

Below is the melody paired with chords. You didn't include where the chords land, so correct me if I'm wrong.

There are a few things going on here. Let's start by looking at the first six measures. The notes played are F#, A, B, C#, D. Assuming modes of the major scale, since the G is not played, there are two possibilities for scales starting on F# if we disregard the chords for now (you'll see why below):

But what is we regard all eight measures, view the D natural as a passing tone, and decide the D# is the real note of the mode? That gives us a third mode:

But what if we also regard the A natural as a passing tone? That gives us the final mode we'll be looking at:

The way triads are constructed from a diatonic scale is by starting at a note and going up by thirds in that scale (essentially playing every other note). So we have the resulting chords for the following modes:

Ok, now let's go back and pay attention to the chords:

From all this, we can conclude that D#m will not fit in any scale that also fits the other three chords.

When you mention playing "F#m with a raised 6," congratulations! You discovered the Dorian scale! (I'm writing this snarkily, but that truly is a good insight.)

Caveat: I've written this post keeping the same root (F#) to keep a basic point of reference. In reality, you might want to think about it as playing F# Dorian over the first two chords, and C# Dorian or D# Phrygian (both the same notes as F# Mixolydian, just starting in a different place) when resolving phrases. Phrasing and the resolution thereof is a bit beyond the scope of this answer, but it's something to keep in mind.

Not the answer you're looking for? Browse other questions tagged harmony improvisation or ask your own question.