4th octave Eb in Chopin, should I trust that the flutist will get the note?

I am arranging Nocturne in Eb Op. 9 no. 2 for Flute and String Quartet and I have reached a spot where it is difficult for me to decide whether or not I should stick with the notes that Chopin wrote in his melody. Yes, if you don't know already, it is that 8va that lasts until close to the end of the piece. Thank goodness Chopin does not go higher than Eb in the 4th octave, otherwise I would have been like:

I have to take this passage down an octave or have the first violin play it, I simply can't trust a flutist to get notes past Eb in the fourth octave without using a piccolo, which would change the timbre and make me lose a lot of the first octave notes, if not all of them.

Before doing this arrangement I researched whether playing in the fourth octave is even possible on the flute and I found that it is and that the pitch limit in that octave is somewhere between F# and G.

But, I'm still a bit worried. Sure, the high Eb that I keep mentioning only occurs twice in the entire 8va, but it is still a difficult note to reach. Even the fourth octave C is much harder than the third octave C(like really hard, I'm barely getting the first and second octaves to sound right after weeks of practice). I'm just worried that a flutist who plays my arrangement of Nocturne in Eb Op. 9 no. 2 won't get the 4th octave Eb. Of course, I could take the 8va away and thus have the 8va passage sound in the octave in which it is written(which is the third octave), but that gets rid of some of the integrity of the original Nocturne.

Here is the 8va I am talking about: 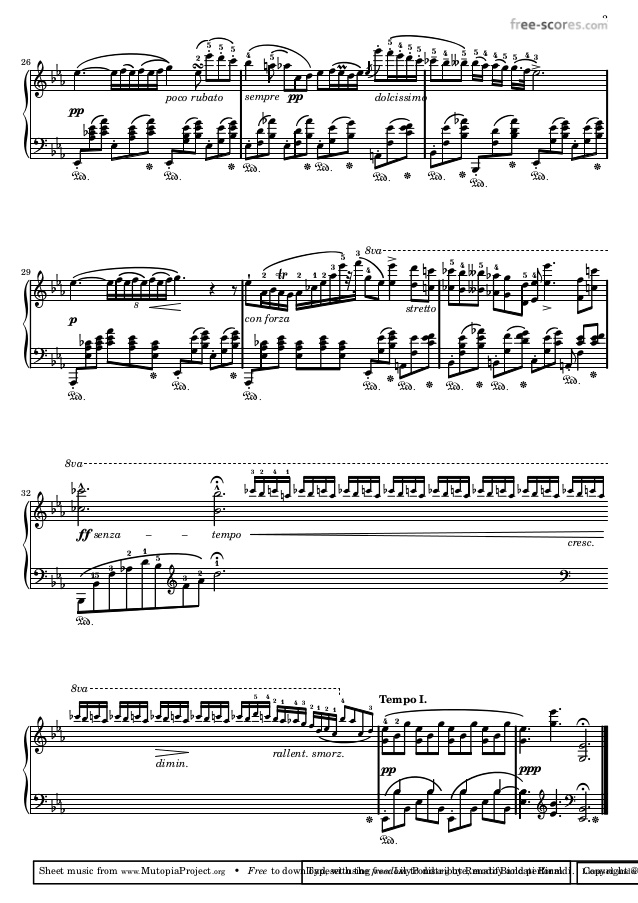 The 8va that leads into and includes the cadenza before the last 2 measures.

With Beethoven arrangements, I am open to this loss of integrity due to octave, because I run into it in just about every Beethoven piece that I would arrange. This is the first time I have ever arranged Chopin and I figured that this Nocturne, which is the first Chopin piece I ever played, would be a good start to arranging Chopin, not too hard, just like how the original piano piece, once I learned how to play triplets, was very easy, especially the right hand(hardest part was the few instances of polyrhythms, but those weren't too hard because the polyrhythms were short in length(only 1 beat)).

So, should I leave the notes in the 8va in the fourth octave(I'm not one of those that writes 8va for flutes and violins) as in the original Nocturne and trust that the flutist will be able to reach up to the high Eb? Or should I take the notes in the 8va down into the third octave despite the loss of integrity that will happen if I do that?

The notes in the 4th octave on the flute are not very practical melodically. Of course, if you have a capable flautist who would relish the challenge then why not, but generally this is not a very characteristic or comfortable area of the flute. Having the 1st violin play at that pitch with the flute an octave lower would be more natural and effective.

Show the part to your flute player and ask them if they feel comfortable playing that highest E-flat (I can almost guarantee they'll say "no").

If you don't know who is going to be playing the part then you should never write higher than C, particularly in a melodic line.

You'll probably have better luck finding a violinist who can play that note.

In general arrangement is about making compromises. You have to take the musical intent of the composer and try to make it work with your chosen ensemble. This is clearly a case where taking the line down an octave is going to work much better.

Not the answer you're looking for? Browse other questions tagged flute arranging chopin or ask your own question.

2
Determine whether to keep the original key when arranging a solo piece
2
Workarounds for 10th intervals or larger when arranging for piano
3
What makes a piece a nocturne?
3
What to check when flute is not hitting higher octave notes?
5
How can I get my left hand to sound legato when I'm leaping?
5
Simple way to add an additional octave in Musescore?
1
Is it possible to stick too closely to Mozart in an arrangement?
6
Is this fortissimo passage in the flute possible?
1
Choosing instrument for a solo