How to play large intervals written for left hand in a Piano with normal sized hand? 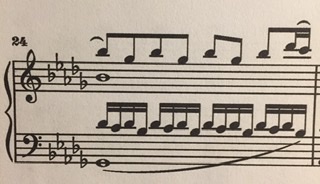 The lower-note seems to be impossibly hard to play. How do I play that?

UPDATE: Here is last part of 23 measure, the last note is not tied with the first of 24th. 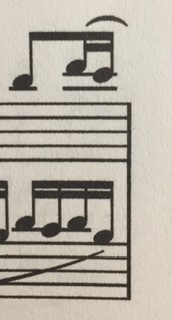 This is definitely possible, even with smaller hands, though the execution might be tricky depending on the speed of the passage.

Play the first Db in the middle line and the Bb whole note above with the 1st and 3rd finger of your right hand while playing the low Gb with the 5th finger of your left. (ignore the top Bb, as it is tied to the note in the previous measure and should not be played again)

Hope that made some sense! Swapping fingers on a key without releasing it will take some practice. It might help to practice each hand separately for a bit.

EDIT:
In response to your update, the solution is simple: just play the bottom Gb with the 1st toe of your left foot.

Joking aside (but seriously, that would be totally awesome!), I do not see any way to play this precisely as written, given that the top note is not tied. That said, piano scores with impossible intervals are not unheard of and the standard technique is, in fact, to play the bottom note just before the rest, catching it with the pedal (as others have suggested). With some practice this can be done quickly enough to almost be imperceptible.

Below is an example from Schubert's Impromptu Op. 90, No 3 of how this is often notated. (Fun fact: In the original score, Schubert just left it as is and let the pianist try to figure it out. The rolled chord notation was added in later by editors since it was impossible to play as written for most pianists. Go figure!).

The video shows how someone plays this piece!

As Old Brixtonian says, you have to play the Gb in the l.h. just in advance of the 16th notes:

If the top note is tied and not slurred, you could hit the first 16th note with your right thumb.

The movement required by both hands after that is possibly uncomfortable but worth a try...

84
How can I significantly improve my hand independence on piano?
12
How do you play a grace note tied to the same principal note?
2
Piano problem specifically with how I should place my hand
2
How to play the piano using less than ten fingers
2
Understanding the ending of Debussy's La fille aux cheveux de lin
2
Sight reading piano pieces with sharp or flat key signatures using intervals
1
(Piano) Fast "alternating" octaves on the left hand - technique or just muscle power?
2
How does a performer with smaller hands manage large intervals in Bach?
2
Pedaling in Shostakovich Op. 87
3
Moonlight Sonata 3rd Movement tied notes