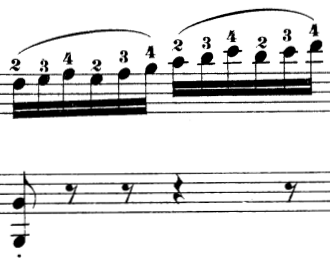 (remark : I use piano, but it maybe it seems that the score is not for piano ?) 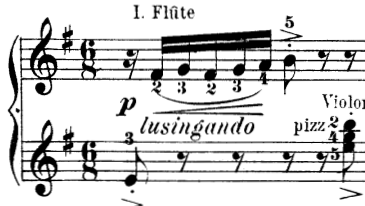 First question. Don't believe published fingerings! They might well suit the editor, but no-one's hands are the same shape, as has already been pointed out. Work out your own - this has two advantages: you end up with something that works for you, and as you're doing this quite slowly you get to know the music better.

This piece wasn't originally for piano - it's a piano reduction of an orchestral piece by Smetana - 'Vltava' ('Moldau' in German - no idea why) from 'Ma Vlast' ('My country'). So there might be passages which are not ideally set out for the pianist.

On the second question, a staccato isn't necessarily half the length of the written duration. It's up to you to decide how long or short you make it. If you get hold of the orchestral score, the first note is played by the flute, and also the harp, which is why the arranger has put it into the left hand - you'll get a slightly different tone-colour that way. Personally, I'd play it more legato to link it with the f# in the right hand - it's a legato flute tune. The last left-hand chord is marked 'Violons pizz' (i.e. 'plucked'), so should be quite short, probably less than a 16th note.

But in the end it's up to you. Playing orchestral reductions is really hard work (I have to do a lot of it, as an accompanist). It's worth while getting to listen to the original orchestral version so you can hear the effects you're trying to achieve.