Does guitar fret spacing solely depend on the length of the string?

On a typical guitar, the fret board has certain spacing between each fret.

Does the spacing of frets on a guitar solely depend on the length of the string? Meaning if I have multiple guitars of different shapes and materials, but all of the guitars have the same length of string, will their fret spacing be identical?

Do any other factors play into this spacing? 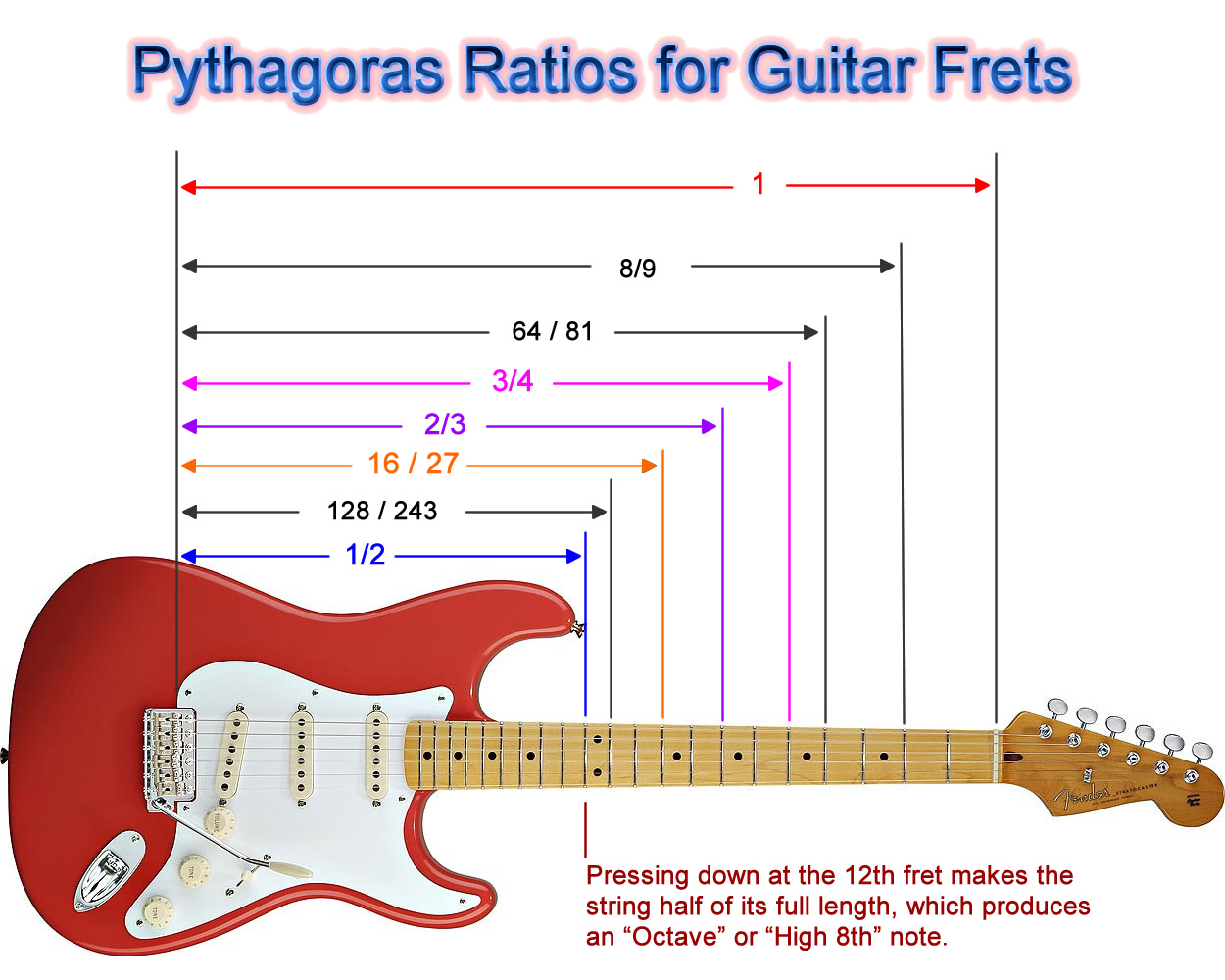 In the picture you included in your question, the scale length of the guitar pictured is indicated by the red line labeled # 1.

Your picture illustrates the fact that the fret spacing gets shorter as you get closer to the bridge. If you were to put a capo on a guitar and then retune the guitar to standard tuning with the capo in place, you would in effect be shortening the scale. The fret the capo is behind becomes the new "nut" in effect. The new "first fret" after the capo will have a shorter space between the new "nut" and the new "first fret" than exist between the nut and the first fret on the guitar without the capo.

Different guitars even by the same maker will often have different scale lengths from model to model and a corresponding adjustment must be made to the spacing between frets.

If the spacing is not precise between frets, the guitar will not play in tune on all frets. Some guitars have adjustable saddles which permit fine adjustments to the intonation to compensate for varying tuning characteristics of the particular guitar strings used - which can vary based on the type metal alloy the strings are made of and the diameter of the string.

Most saddles on acoustic guitars are "compensated" meaning they create a slightly different distance between point of contact at the saddle and the nut to compensate for the tuning differences between the larger diameter strings and smaller diameter strings. But the frets are always perpendicular to the fretboard and the spacing between frets is always based on the overall scale.

Technically a guitars scale is the distance between the nut and the center of the 12th fret doubled. The 12th fret is (for practical purposes) the midpoint between the nut and saddle. Therefore, the distance between the nut and 12th fret would mandate the location of the saddle and the fret spacing would be calculated based on the scale length using Pythagoras Ratios (a mathematical calculation). The Pythagoras ratios determine how the length of a guitar string (as altered by each fret) corresponds to the relative difference in pitch of the same string at each different length. For example, we know that halving the length of a guitar string (12th fret) will cause it to vibrate at a frequency which we will hear as the same note exactly one octave higher. The other divisions are more complicated than dividing by two - but each ratio will have a specific effect on the relative vibration frequency (and thus pitch) of the strings.

Primarily, but not solely.

The fret spacing, and the progression of frets along the fretboard as you move toward the bridge, are based on the equal-tempered scale, and are primarily based on the total length of the string from nut to bridge.

However, two other variables affect how close a fit that fret progression is to the "ideal". Those are tuning and action. Simply put, the higher the open string is tuned, or the further the strings are intended to be off of the neck, the higher the tension a fretted string will have, and that will "pull" fretted notes sharp. If the instrument is designed for a higher (or lower) action, or for a higher (or lower) tuning, the fret spacing may need adjustment in order to ensure that the transverse pressure placed on the string as it's fretted, adding to its tension, combines with its shorter fretted length to keep the note in tune at each fret.

In reality, these concerns are relatively minor for a factory-built instrument, unless your tastes in your guitar's action are really off. However, when building an instrument yourself, you cannot just lay out a totally mathematically-derived progression of frets along the fretboard and expect the thing to stay perfectly in tune. Even with the bridge intonation properly adjusted to bring the octave in tune, other frets are going to be sharper if you lay out the fretboard this way. Most commercially-available layout guides leave the string's speaking length slightly longer than the mathematically-ideal length at each fret to compensate for the increased tension of the fretted string.

If you are talking about equal temperament 12 tone western tuning then yes. The length from bridge to nut sets the fret locations and hence the spacing.

Does the spacing of frets on a guitar solely depend on the length of the string? Meaning if I have multiple guitars of different shapes and materials, but all of the guitars have the same length of string, will their fret spacing be identical?

Yes.* ‡ Two guitars with the same scale length will have the same fret position.

Not the answer you're looking for? Browse other questions tagged guitar tuning fretboard or ask your own question.

4
Playing in E♭ tuning with capo on the first fret

153
Why is the guitar tuned like it is?
7
Why tune the guitar other than standard?
6
What's the difference between a junior guitar and a normal guitar?
19
What determines how hard it is to press a guitar string?
15
Piano vs Guitar Strings? Tension vs length?
12
Why is the last string on a guitar called the first string and the first string called the sixth string?
2
When playing a scale for a solo do you play only within that octave on the fret board?
4
Physics of Guitar frets and sound
2
Which Fret do I Indicate on an up-the-neck chord chart that is using a capo?
3
5th Fret Method of standard guitar tuning