In a minor key can a cadence on the relative major be considered a type of quasi half cadence?

My question is not: what is the textbook definition of a half cadence?

What I am trying to get at is the perception of an incomplete, sort of antecedent phrase ending.

When playing the following hymn I heard the harmony and phrasing as marked... 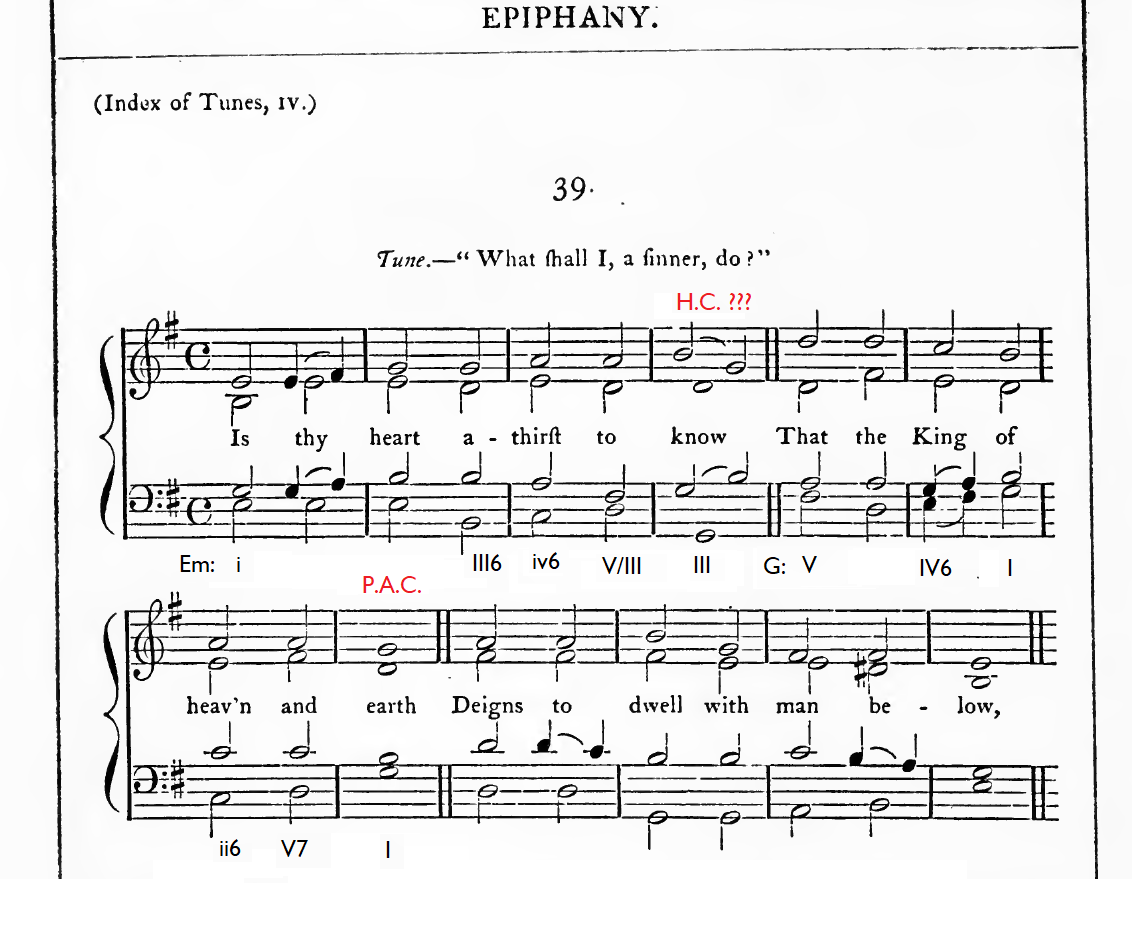 Obviously I could try marking a modulation to G major in the first phrase and then call the ending perfect cadence. But it doesn't feel that way. Especially with the pairing of the two phrases.

If the music were major key, I could easily imagine the first phrase ends on a normal half cadence followed by perfect cadence in the dominant. Like this:

...the domiant is both the common point for modulation and the contrasting chord for a half cadence.

...the analogous structure in minor? The relative major is both the common point for modulation and the contrasting chord for a quasi-half cadence.

I guess the main concern here is just about labels. A typical half cadence doesn't require a key change label, because there is an accepted cadence type to use. But in this kind of minor key phrase there simply isn't such a cadence label. Or is there a label? Perhaps one from earlier theory, or from another language.

I think the answer depends on what you mean by the term "half cadence."

On the other hand, I sense that you're after something different. The etymological root of half cadence obviously is referring to a sort of standing point on the way to something else (i.e., "halfway" to there, whatever "there" is).

And in that second sense, one might consider a lot of chords as substituting to create a sense of an "unfinished cadence" that ultimately gets to a PAC later.

I certainly think III can function that way in minor keys. The immediate progression that comes to mind is the standard Folia progression and variants of it, where phrases commonly move toward III (the mediant) but then return to minor. Hundreds of Russian Orthodox chant arrangements do a similar progression too, mirroring a minor-mode harmonic move that was also common in Western Europe in congregational four-voice chanting settings in earlier days. (This is the tradition the hymn setting you quote ultimately comes out of.)

In fact, early theories of keys and cadences in the 17th-century often gave a place of privilege to cadences on the mediant, as another sort of "dominant" that served in contrast to the tonic. This relationship was usually stronger in the minor mode.

(Actually, to be more accurate: originally the French terms dominante and mediante were used to classify cadences that could occur on various notes of the scale depending on the precise mode, where the dominante was only slightly inferior to the finale of the mode, and the mediante was an alternative place to cadence in the middle of a piece, which often fell on the third above or below the finale. A cadence mediante was actually sometimes a term for any cadence that occurred "in the middle," i.e., what you're calling a "half cadence." The mediante cadences often came on the third above in what we'd now think of as "minor modes," but could fall below in some modes we'd now think of as "major modes," i.e., a cadence to vi. Eventually, the terms mediante and dominante settled down in French theory to the third and fifth degrees in all modes, which begat our modern nomenclature for those scale degrees.)

So yes, there's all sorts of conceptual and historical precedent for saying that III in a minor key can be an alternative cadential destination for a medial cadence within a larger set of phrases.

All of that said, I don't understand the labeling of cadences in the question. Both of the cadences to G are obviously authentic cadences with very strong ii6-V-I motion. I get that the first cadence feels less strong (as an IAC, lacking a V7, and a very fast modulation), but it's clearly not a half cadence in the hierarchy where cadences are called things like PACs.

I think perhaps what you might be feeling is partly the general sense of 4-bar phrase units adding up to a larger 8-bar structure. When one hears a sudden modulation at the outset and an arrival point after 4 bars, it's often meant to feel like "halfway there," and you get the rest of the way "there" after the first 8 bars. That seems to be the sort of modulating period-like structure you document at the end of the question, giving a sensation of structural completion after 8 bars.

And, in this particular hymn, by the end of the first 8 bars, one might legitimately wonder what key we're even in. Did we just begin on an unusual chord, and the "real key" is G major? Of course, subsequent phrases eventually confirm E minor to be the true tonic (after even more waffling with G -- the mediant -- as a temporary goal again toward the end of the verse).

You hear it the way you hear it, but IMO this is a good illustration of the fact that the major and "relative Aeolian mode" are so close to each other that their tonality can be ambiguous.

In G, the harmony of the first line is completely conventional cadential formula: vi I6 ii6 V I, and for me that's what the end of the first line sounds like. However the three E minor chords at the start make it sound like it is starting in E minor not G major.

We don't get an unequivocal leading note of E minor (D#) till the end of the third line.

The fact that the tune ends in E minor reinforces the feeling that it also starts in E minor, in subsequent verses.

I don't see any logic in analysing the exact same ii V I chord sequence at the end of lines 1 and 2 as two different types of cadence in two different keys. That seems like eye-music not ear-music IMO.

Try an experiment. Play line 2, followed by line 1. Do you still hear line 1 as in E minor ending in a half cadence in the relative major?

By "eye music" I mean analysis by looking at the notes, not from what they sound like. A nice example was a recent thread where somebody was trying to analyse the chord sequence Cdim7 C (in C major). First, rename Cdim7 enharmonically as D#dim7. Then consider D#dim7 as B7(b9) with no root. Conclusion, these two chords are obviously an interrupted cadence, V of iii VI of iii. Or maybe not.

Not the answer you're looking for? Browse other questions tagged cadence or ask your own question.

4
How is a clausula tertiaria/medians distinguished from a modulation to the relative major?

16
Do different modes have the same cadence structure?
5
Name for major/minor ambiguity in cadence
3
Is this an imperfect authentic cadence in a minor key?
3
Is the typical use of the N6 Neapolitan chord to lead to a perfect cadence rather than a half cadence?
4
Can we have a perfect cadence in a minor key?
0
Can this chord progression be viewed as a cadence?
2
Is a v-VI♭ progression in a minor key still a deceptive cadence?
4
How is a clausula tertiaria/medians distinguished from a modulation to the relative major?
1
2 atypical cadences, are they half cadences?