As you may have understood by my username I'm a fan of Nirvana, I've been trying to sound like Nirvana with my amp but still haven't got the sound I want with the settings that I've tried... Any ideas on what i should do?

Bear in mind that the albums are often double tracked and or have things like stereo separation effects that alter the sound from the way the band actually plays a song live. Also, microphones play a bigger role in recorded tone than average people credit.

Cobain was not known for a ton of effects: clearly he used tremolo and phaser/flanger effects on albums but in the following photo, it looks like he is only using boss "DS-2 turbo distortion" and a "Sansamp classic" amp simulator pedal. Pretty simple. It is possible some effects are in a different loop off camera.

Many guitarists simply use a chain of gain. I myself use a compressor, a special wah never off, and then a tube screamer fed into an amp that is up just enough to barely break when the pedals are off. 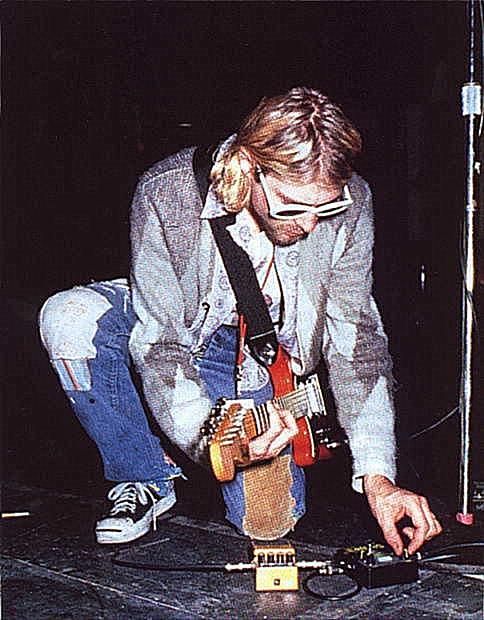 Not the answer you're looking for? Browse other questions tagged electric-guitar amplifiers tone or ask your own question.

3
Deep clean sound from Pod X3
5
Guitar audio interface matching tone of my old amp, and a problem
7
What is causing this weird distortion coming from my amp?
2
Making electric guitar sound like semi acoustic
0
Amplifier settings for Epiphone Standard Pro Top
0
Set Line6 AMPLIFi so that there is minimal ringing or feedback after strumming?
4
How can I overdrive my tube amp at low volume?
1
Cannot get the desired tone when recording a Nirvana song