Ive been looking at buying an old Harmony guitar online. The one I'm looking at has had a neck reset and the action is about .070 though I think that was measured with the guitar on its back.

I'm worried that the saddle is too low however.

Because I want there to be enoigh pressure on the saddle to produce good tone and volume.

Here is a picture: Do you think the saddle is to low to get optimum volume and tone?

Also I'm thinking this is about as low as the saddle should go so it wouldn't leave me any room down the road.

Was this neck reset done correctly given the height of the saddle? 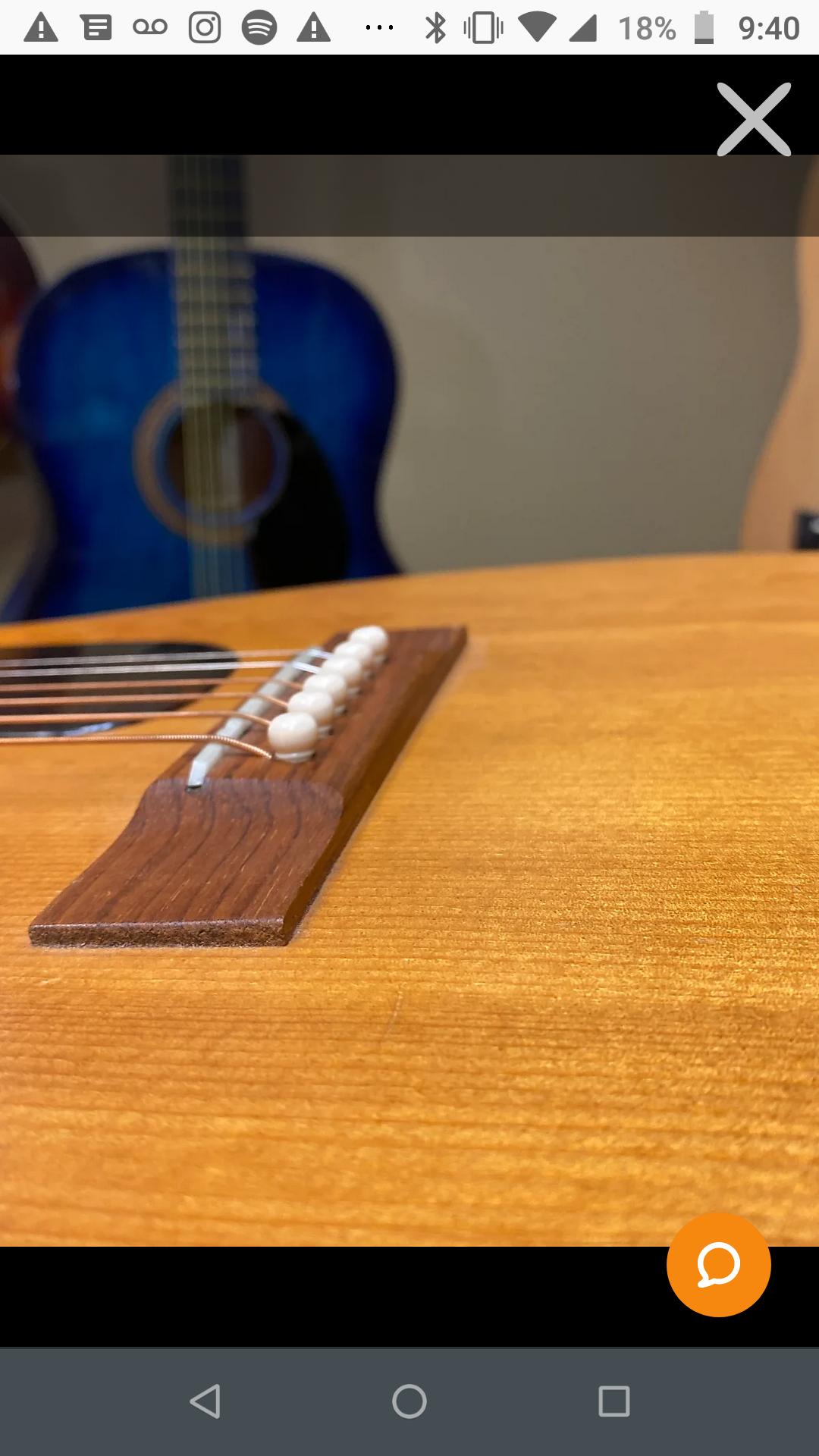 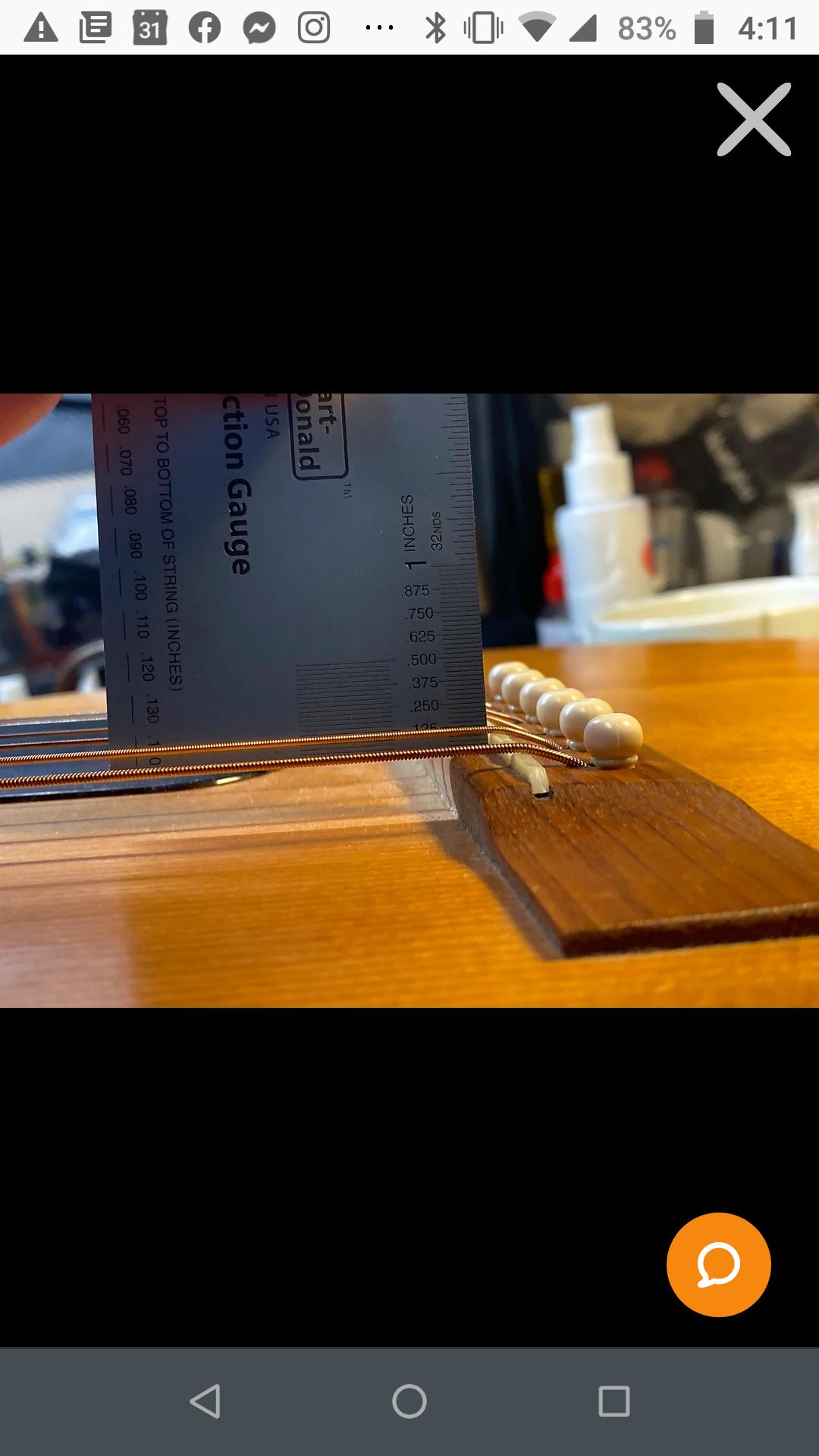 When I measure action on a set-up, I measure from the bottom of the string to the top of the fret at the twelfth fret and the first fret. I adjust string height at the nut and at the bridge to accomplish the measurement I desire at the first and twelfth fret. That measurement might vary depending on my picking style, strumming style, and sometimes the kind of music I'm interested in playing. Also, if the neck itself is not reasonably straight, that's going to affect how it will need to be set. There are a few good books to help you learn to set up a guitar step by step. I notice you are using a Stewart-Macdonald gauge to measure the string height with. A Stew-Mac employee, Dan Erlewine, has written a very good how to set-up guitar book that you can find online by googling his name.

The saddle isn't too low. You want enough down angle from the saddle to the bridge (pin slots) to keep the strings from rattling across the saddle, and from the picture it looks like you have enough angle. As long as there is no string rattle you are fine.

EDIT: Since the question was clarified as to why the concern for the low saddle, I stand by my assessment. You have enough down angle after the saddle to transfer all the energy from the strings. You won't start changing tone until the strings are nearly flat, and even then there is tension at the peg down to the string ball that transfers energy into the bridge, so even if you were to remove the saddle completely you wouldn't have much difference in tone. For an example, some Ukulele bridges have the strings come straight off of the wood, and the Cavaquinho often has the strings come straight off of the bridge knot.

I have on occasion deepened the saddle slot and lowered the facing wood of the bridge to allow a lower action, and the main issue is making sure there is enough downward tension on the saddle. In a few cases I've seen guitars where the bone saddle has been removed entirely and the strings resting on the wood of the bridge in order to lower the action and the guitars played just fine.

Not the answer you're looking for? Browse other questions tagged guitar setup or ask your own question.

5
Guitar intonation issue - still flat but screw as far as it'll go
7
How to decide what kind of truss rod wrench to buy?
3
Adjust left / right angle of guitar neck?
0
Guitar intonation problem
0
Fret buzzing after set up
5
When adjusting the neck of an acoustic guitar, what bending might be normal?
2
Am I correctly approaching the relationship between string bending and action height?
5
Truss rod adjustment had no noticable effect
2
Putting (almost any) pressure on guitar neck warps sound
0
Low-fret string buzz