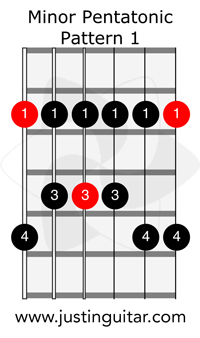 Hey, I'm starting out with scales, and I've been learning the Minor Pentatonic scale pattern 1 first.

I've read that, the root note defines what scale you're playing. So, if the root note is on 6th string 5th fret, that's the A Minor Pentatonic scale.

I've also read, that to find out the Minor chord in the scale, just flatten the 3rd note, but the 3rd note in this pattern would be D, and that's wrong, since A minor is made up from A C E.

Am I doing something wrong? This is getting me really confused

The most commonly used in Western music is comprised of seven notes, called the major scale.The gaps between the notes is TTSTTTS, where T=tone and S= semitone. Portrayed conveniently on pianos as the set of white keys, starting with C, the note immediately to the left of the two black keys.

That is really considered the starting point for a lot of theory. The third note in that series is indeed the major 3rd, and to arrive at minor, it's lowered by a semitone.

The major notes in key A are A, B, C♯, D, E, F♯ and G♯. So now, it's clear that the 3rd note from A major is C♯, and gets lowered to C♮ for A minor. Because the min.pent misses out the 2nd note from the full minor scale, its 2nd note is C.

share|improve this answer
answered Jan 14 at 10:53

...I've also read, that to find out the Minor chord in the scale, just flatten the 3rd note

I think that short cut tip is poorly worded.

The simple musical fact is: the third of a minor chord is a minor third above the root.

If one talks about "flatten the 3rd", we could start with a major chord where the third is a natural tone, like G major GBD. In that case we can literally put a flat on the B to get a minor chord as G Bb D. But, if the major chord uses a sharp, like A major A C# E then we don't use a flat, we use a natural to get the minor chord A C E. Rather than flatten it's lowered.

It's probably better to think of the third of a chord as:

share|improve this answer
answered Jan 14 at 15:21

Most of these recommendation on "counting the third of the scale", etc., are based around a diatonic scale, which is made up of 7 notes.

In case of a pentatonic, you're skipping 2 notes out of the diatonic scale, leaving you with 5 notes.

In your case, you're playing the minor pentatonic already, so there's no need to flatten anything.

The best way to think about this is:

A minor scale includes an note that is 3 semitones above the root. This interval is called a minor third. In your case, it's A -> C

A major scale includes a note that's 2 full tones above the root. This is called a major third. In the case of A major, this interval would be A -> C#. This note is present in the pentatonic major scale.

share|improve this answer
answered Jan 14 at 16:49

I don't know what the "flattening" of some notes could mean. I'm 99.999% sure it is a misunderstanding.

But let's ignore the misunderstanding, there's no need to know about flattening anything. The natural minor and major scales are easy to explain in relation to the minor pentatonic scale you already know. Look at the following pictures. I added the notes of the natural minor scale and the major scale on top of your original picture. 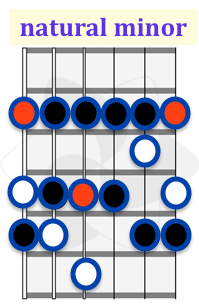 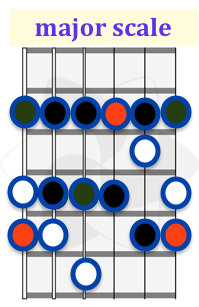 I think saying "just flatten the 3rd note" to get the minor chord of the scale is a convoluted way of looking at how you get chords out of scales.

Much like it says in the name, an A minor pentatonic scale will have the chord A minor in it.

Here's a resource on how chords are diatonically derived from scales

share|improve this answer
answered Jan 20 at 20:23

12
Correct terminology for chord inversions
2
Guitar Grimoire & Chord Compatibility question
6
Why do I see different tabs for same C Major scale and which one should I use?
3
What is a good resource to learn how to build chords from scales?
7
Chord progression if the chords are not part of the scale?
1
Making part of a triad chord sharper, but is it counted as minor?
5
What is a D/A Chord?
5
Chord construction using the minor scale
7
Confusion about blues scale and chords
0
Explaining DADA to EGBG (and in the other direction) in theoretical terms