What are some things I should consider when arranging guitar parts in songs with two guitars? Until now I have just followed my instinct, but it would be nice to have some theory to inform my decisions.

Here is a typical example: 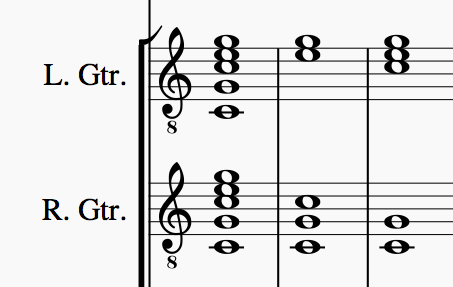 These are all the same chord--a C major barre chord. But there must be differences between them right? Is the difference a musical one (i.e. making sure the chords sound balanced) or a production one (making sure the guitars sit in the right frequency in an audio mix?

Note: two similar-sounding guitars (distortion) in rock setting (accompanied by bass, vocals, drums); not too technically proficient, but “figures” like arpeggios and lead riffs are present; no whammy or wah or reverb or chorus or any of that; style is poppy rock (think The Cars)

I don't really know how to ask my question . . . I suppose I am just looking for some things to consider when assignment parts to guitars.

What are some things I should consider when arranging guitar parts in songs with two guitars?

Rock guitar arrangement tends to be for "lead" and "rhythm" guitar; this is not universally true, especially if you dig into particular subgenres, but it's a relatively safe way of doing things.

Rhythm guitar forms part of the "rhythm section" with the bass and drums; these instruments provide the most basic elements of the song as a backdrop for everything else. Rhythm guitar plays [rhythmically and/or harmonically] repetitive figures, usually riffs, but sometimes improvised comping over chord progressions.

Lead guitar, confusingly, often plays as part of the rhythm section too, sometimes going as far as to play in unison with the rhythm guitar for entire sections of song; I personally think unison guitars are overused in rock music, but it's a safe genre convention that won't draw too much negative attention. Where rhythm guitar is expected to be predicable and keep to the background, lead guitar might be expected to add fills or harmonies where appropriate, and usually takes the guitar solo if applicable.

Sometimes lead guitar plays a riff that could be a rhythm guitar line because the rhythm guitar is playing something even more basic, e.g., chugging away on power chords.

The distinction between the rhythm and lead part can get a little arbitrary, especially if you have a lead guitarist that plays extremely long unisons with the rhythm guitar and both guitarists divvy soloing duty between them. I would contend that in many cases, this indicates a failure in arrangement.

These are all the same chord--a C major barre chord. But there must be differences between them right?

If it sounds different, then yes; if not, then no; test it and find out. Breaking up solo-guitar voicings across two different guitars like in examples two and three probably isn't making the most of your two guitars; but one obvious reason to try it out would be if you had two guitars with very different tones.

The main reason I would break up a chord between two guitars is to play voicings that are not possible on a single guitar; closed ukulele voicings, huge multi-octave chords, even monstrous polychords and dense walls of muddy noise. In these cases, neither guitar is really acting as rhythm or lead, they're working together to provide a single sound.

Not the answer you're looking for? Browse other questions tagged electric-guitar arranging rock-n-roll or ask your own question.

36
How to play songs that contain one guitar when we have two or more guitarists?
2
how can I study orchestration methods for electric guitar?