I'm an amateur tenor trombone player. I learnt to play by playing with other, never learnt much music theory.

I have a question regarding the "name" of the trombone. The traditional tenor trombone is the Bb trombone, or Bb/F trombone if there is a valve attachments. I understand that this name comes from its fundamental : when played "closed", this is the note played.

However, it is also a "non-transposing" instrument, and trombone parts are therefore written in ut/do/C. So trombone parts (at least mine) usually states "Trombone C".

This confuses me a lot when I try to talk about other instruments :

In general, what do we mean by "this instrument is in Bb", or "in C". It seems to me that the Bb trombone is in C, which is frustratingly complicated for me. Why do we bother using the fundamental of the instruments in its name?

Edit For example, the same vending site (Thomann for example) will call :

For trombonists, the transposition (or not) depends on the musical context you're playing in:

In orchestral, big band, etc., trombones are treated as concert pitch instruments. Parts are often in bass clef (though they can use one of several other clefs trombonists have to read) - see a written Bb - play 1st position (closed) and sound concert Bb.

But in general, if an instrument is said to be "In Bb" then it means that playing a written C sounds a concert Bb. Or instruments in Eb, play a written C, sound a Concert Eb.

There's no confusion if you keep in mind what sounding pitch you actually want. So instead of just saying "I'm playing a Bb", say "I'm playing a Concert Bb".

Bb- and Eb-trombones are Bb- or Eb-trombones because they are actually transposing instruments like Bb trumpets or Eb horns and because they have this root tone Bb (or Eb) when played in closed (or zero) position.

Some trombonists - are who are aware of this - can read music in C notation but then they mind that the C of orchestra pitch is position 5 (as if they would read a written D for Bb-instruments.

There seems to be also a confusion between the labeling of positions:

look at the posted picture, so the classical trombonist will play a C in the orchestra in position 6) 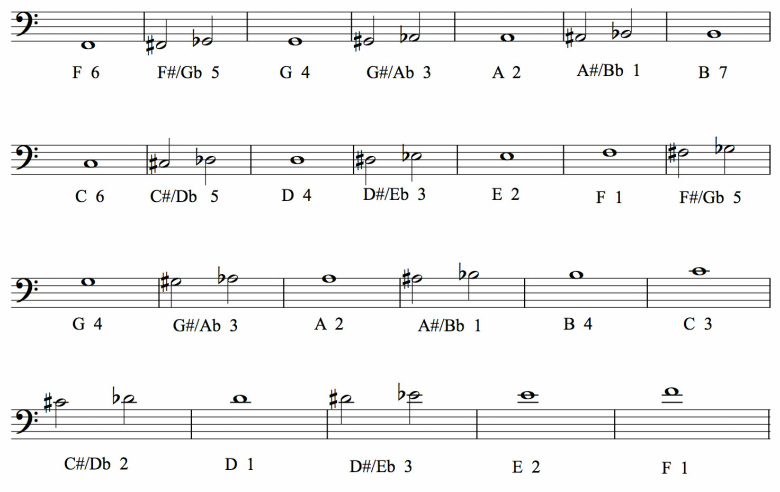 For brass band players who read treble clef notes, the written notes and slide positions are shown below. This image shows the notes as sharps 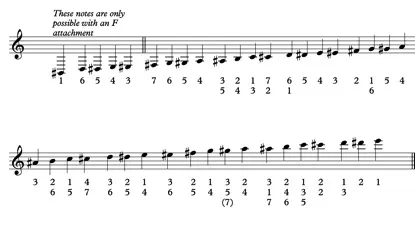 I am not a professional musician, I just want to add something to the previous answers as a (tenor - B♭) saxophone player who deals with brass sections (trombones and trumpets mainly) reasonably frequently. My interpretation might be contrary to official and semi-official guidelines for brass/woodwind sections (I have no formal training or relevant degrees).

The trombone is (kind of) like a fretless guitar. You do not have any keys, so "by definition" your instrument cannot be a transposing one. The sole purpose of making trumpets and saxophones transposing instruments is to have the fingerings identical if one switches from, say, an alto saxophone (E♭) to a tenor (B♭). The fingerings for saxophones are not linear (except for specifically-made linear-fingering instruments) and would pose a big problem for someone switching from one instrument to another within the same "family" had they not been transposed.

As far as my understanding goes with trombones, the "key" they are in, as other respondents have stated, refers to the note sounding when in "zero" (or "null") state. The only way you can really relate to most other musicians is by stating your instrument's "normal" (non-altissimo) range (keep in mind that some systems refer to the first octave as the 0 octave, and some others - 1; it's very similar in the programming world, where some languages start indices at 1 as opposed to the more "regular" 0).

Where I am, I mostly see trombone parts written in the bass clef, concert pitch, and the parts for trumpet and saxophone are written in "concert pitch" tuned to their respective instrument. So, to give you an example, if the trombone score is in C, my (B♭ saxophone) will be in D.

To sum it up, I do not consider trombone to be a transposing instrument, because it has no keys (tone holes) and functions similar to a fretless string instrument in that respect.

P.S. Languages can be very misleading. With the musical language specifically, you will often find that the same words and phrases can refer to completely different or unrelated things. Even tempo markings for classical music have to be interpreted differently depending on where they stem from. I think this is such a case. If English (or German) is not your first language, in my opinion, you will often find it difficult to understand what the hell is going on. I have studied under 3 different notation systems (4 if you take into account British English having weird names for note durations, like "hemisemidemiquaver", which is like an STD to someone who has previous experience of learning Latin and Ancient Greek).

Don't give up and develop a healthy understanding of spoken language differences and how they relate to the underlying mathematics and physics of music. If you have previous experience with natural sciences, you will also know that different countries use different common symbolics to denote the same things. It's the same with music. Treat it as another human language.

Update: following the guitar analogy, you can think of your instrument as being "tuned" to a particular note (except you can't change it by turning pegs). A guitar doesn't suddenly become a "D" instrument if you change its tuning from EADGBE (regular) to DADGBE (dropped D) - it continues to play in the same key.

Not the answer you're looking for? Browse other questions tagged instruments transposition or ask your own question.

16
What is a transposing instrument?