In what way is music considered to be in a mode when accidentals seemingly contradict the mode?

Also, I noticed that the fugue answer uses C# and so a Dorian key signature sort of accommodates the answer. I'm not sure if that is the modal aspect of this particular piece, but the same question comes up in non-fugal music.

I have had this same question before when looking at examples from Fux's Gradus. When he gives examples of counterpoint in the various modes, what I think of as the characteristic tone of the mode (like #4 of Lydian) will be changed with an accidental. In Fux it seems the final was the only identifier of the mode, ex. for Lydian the final is F, but the B will get lowered. In Fux Phrygian seems a special case because the Phrygian cadence makes clear the mode from other minor modes. 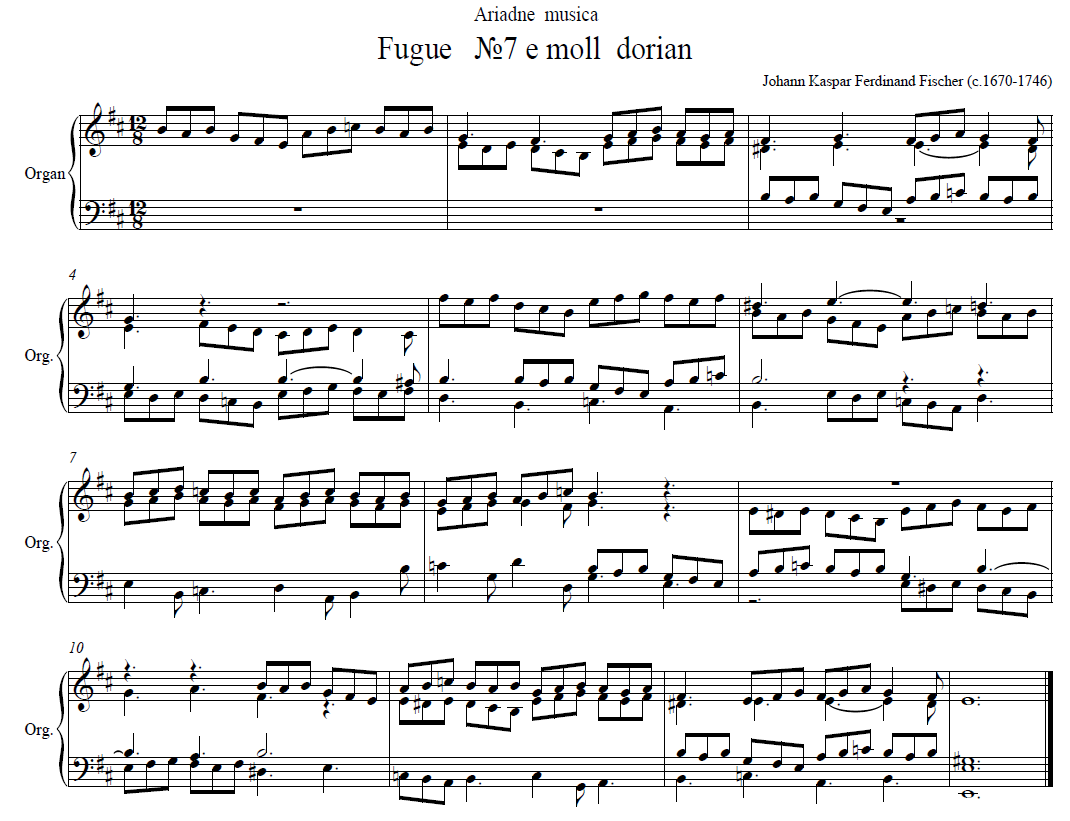 An example from Fux.

For arguments sake, if the music was transposed to a final of C where there was no need for accidentals, wouldn't the music be considered in Ionian? If not, why?

While the guest answer makes some useful points about the edition, it doesn't really address the broader question (or Fux).

The basic answer to this is that the modern set of scales taught as "modes" are somewhat fictional, having little basis in historical use, particularly in polyphony. The 8-mode system of church modes was primarily employed as a classification system for monophonic chant, never intended for polyphony. Basically, the system was originally developed so people could know which chant formula to use to recite formulaic elements of the liturgy (like psalm tones) which would correspond to the other chants surrounding it in the liturgy (e.g., antiphons). That's really the main reason the 8-mode system was invented in the first place -- you hear a chant with certain cadences that are called mode X, and then you recite the psalm using this formula Y.

Polyphony developed pretty much without regard to any notion of mode as a foundational scale that a piece was "composed in." At most, one might be concerned about the mode of the chant tune that was often used as the basis of a piece of polyphony, but the other voices certainly didn't need to conform to any particular "modal scale." It was only in the mid-1500s that some composers and theorists tried to graft the old church mode names onto polyphonic pieces, and that was only done sort of haphazardly, and with due respect to the pre-existing practices of the 8-mode system.

You see, the 12-mode system was really unnecessary when it was introduced. The medieval gamut had one true accidental: B-natural and B-flat. That meant that a chant starting on D could have a B-natural (what we now think of as "Dorian") or it could use a B-flat (what we now think of as "Aeolian" or "natural minor"). But, in medieval theory, both of these would just be various uses of "Dorian." And some chants used both versions of B. Similarly, a chant with a final on F could have a B-natural or B-flat or both. All of it was called "Lydian." No dire need for Ionian and Aeolian at all.

All of this is background to say that "Dorian" mode as understood for both monophonic and polyphonic practice historically could very well include both versions of scale degree 6. And "Lydian" could include both versions of scale degree 4. That's how those modes worked, and those names still stuck around for such uses long after the introduction of the (somewhat unnecessary) 12-mode system with its Ionian and Aeolian.

And as for Fux, his treatise is ultimately a mish-mash of overlapping old modal practices thrust into a somewhat tonal context, and a hardy helping of stuff that he likely just made up (which had nothing to do with Palestrina or modes). It's really important not to read Fux as representing anything close to the actual practice of Palestrina. Fux was trying to teach people how to write something like 18th-century music while also paying homage to the "strict style" of "modal" music that wasn't really current practice anymore.

All of that said, his use of B-flat in a "Lydian" context is far from unusual, when compared to the use of B-flat in Lydian chants and in polyphonic works labeled Lydian in the rare 16th-century collections that actually labeled pieces in modes.

As to the last question -- if this were transposed into C, wouldn't it be "Ionian"? Sure. Except, as I said, "Ionian" was never really necessary as a mode to begin with. Look at real examples of polyphony that end on an F final from the 1400s and 1500s. Pretty much all of it has B-flats all over the place, even before anyone called anything "Ionian." (In fact, one might argue that one impetus for making "Ionian" into a mode in the first place was the fact that so much polyphony was already being written in that scale before anyone had a unique name for it.) I'll give Fux credit here in that his examples do reflect some realistic elements of historical practice, one of them being that F-based pieces frequently made use of more B-flats than B-naturals.

Find the editor of your edition, and ask him (if he is still alive).

If you look at this collection on IMSLP, the two early editions say nothing about modes. In fact Forkel's MS has a key signature of 1 sharp, i.e. plain E minor.

Leopold's edition has the same key signature as your image but uses the now-obsolete convention for accidentals (i.e. flats and sharps change the pitch by one semitone, rather than being absolute indications of pitch, and with a few exceptions only apply to one note, not the whole bar).

At a cursory glance, the collection seems to be working chromatically through all the "practical" keys available in unequal temperament. At the time of composition (c.1700) key signatures were not so standardized as they are today.

Judging by the rather pointless repetition of the instrument name on every system, I guess your image is a modern computer-produced publication, and probably not made by a professional.

There seems to have been a time where the different minor modes (those with minor 3 rd) became convergent and indistinguishable: dorian with accidental minor 6th, aeolian with accidental major 6 th, and the same development or process analog in the major modes:

Maybe we find more light in Zarlino’s on the modes

The following summary may serve as an introduction to the modes, the basis of all organ music through to the seventeenth century. The voice-ranges of the twelve modes are given, the white note being the key-note. All are in their untransposed state with the exception of modes II and XI, which have been transposed respectively up a fourth and down a fifth, reflecting common usage. All pairs of modes function regularly:in the odd-numbered modes Tenor (and Soprano) use the authentic scale, Alto and Bass the plagal scale. In the even-numbered modes the roles are reversed except in the case of mode IV,which is often almost indistinguishable from mode III, having sometimes a smaller range, sometimes a larger one, especially at the upper end of the Soprano. In all cases it is quite normal to extend the voice-range occasionally by one or possibly two notes. For further reading see Meier 1992 and the present writer’s introduction to his edition of Giovanni de Macque’s Ricercari sui Dodici Toni.Unless otherwise stated, the descriptions represent a précis of the widely-known account of the modes given by Gioseffo Zarlino in his Le istitutioni harmoniche of 1558.

But I’ve found another article:

Not the answer you're looking for? Browse other questions tagged modal or ask your own question.

3
What are the modal characteristics of major modes?

12
Why Orlando Gibbons is considered "the end of modality, the beginning of tonality"?
1
What's it called in music theory when a melody changes key every measure?
5
Is it possible to find the mode of the borrowed chord?
6
Using the Circle of Fifths for Modal Music Key Changes: Is this oversimplifying?
1
What are the key features to keep in mind when writing melodies in Mixolydian mode?
7
Names of different definitions of key
5
Help me figure out the mode of this Howard Shore piece