I've been improvising over Hoagy Carmichael's Heart and Soul and I came across a chord voicing that seemed a little strange to me. As shown below, the C13 is voiced F-Bb-D-A, using the 7th, 9th, 11th and 13th, but omitting the root, 3rd and 5th entirely.

How is this a C chord when no part of the C major triad is found within it? Why isn't it a BbM7?

The only way I can justify it is that the piano is meant to comp a band that plays the rest of the chord and this got carried over into the piano transcription. 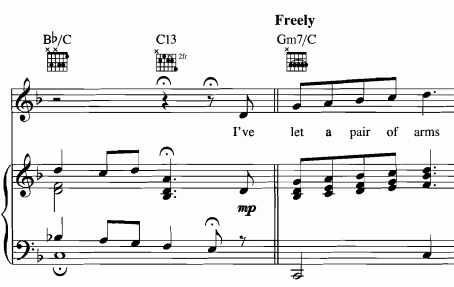 I disagree with Dekkadeci answer's. Instead: BbM7/C would be a proper and more understable name. Or maybe F11/C, which will gracefully accept the following note E.

Look at the two other chords they are: Bb/C and Gm7/C.

That C13 candidate does not contain a single note from the C Major triad indeed: no C, no E no G in the chord. Only a lasting bass, that lasts during all the harmonic evolutions. Before and after.

However it easily could have. On the keyboard there's plenty room to play a E with middle finger, or G besides the A.

When that E is played just after the so-called C13, it doesn't sound like a stabilization to my hear. I insist:

One argument in the other answer is the presence of the E at the late end just before the start of a new phrase: When I play the extract, that E is nowhere near a stabilisation of any sort to a C chord, whehter it be C, C7, C9, C11, or C13. It rather introduces interrogation, lack of equilibrium and asks for the new phrase that starts just after.

There's no reason to name it a C chord, except for the droning C during all of the excerpt, whatever the other chords are playing too.

That long echoing C bass, is also translated in the BbM7/C or F11/C chord. But although it lasts the whole excerpt, I do not feel that C at all like the tonality. Not at all.

And it's because of that "Not At All" that I write this answer. And I strongly suggests the reader to play these notes on a keyboard to understand that it is not a stabilization on any form of altered C major chord.

An interviewer asked Domenic Miller if we should use barre (bar) chords. His answer helped to shape my thinking; play chords the easiest way.

I apply the same principle to chord notation: whatever makes it easier to understand. The C13 is exactly what is played in the guitar chord box. I suspect that's why it's notated that way; to make it obvious to a guitarist what to play. From a theory standpoint, BbM7/C makes more sense, since it logically fits with the other two chords.

Not the answer you're looking for? Browse other questions tagged piano chords chord-theory jazz chord-voicings or ask your own question.

16
Proper symbol for this chord (1 5 b7 9 11)?
4
Why does most "Country" Music use mostly major and minor plain simple chords?
12
When a major 6th (or an octave thereof) is in a chord, when is the chord symbol written as a 6th vs. a 13th?
6
How to make 9th chords (and beyond) easier on ukulele?
5
Do we hear bass/baritone solo melody lines as being implicitly "on top of" the accompaniment, for harmonic purposes
10
Why might a major chord on piano be voiced Root 5th 3rd Root?
1
How should I write a tutti chord?
6
What's the difference between a 13th chord and a full heptatonic scale?
6
Determining chords in a key
4
Difference between *block chords* and *Barry Harris* voicings