Staggered discontinuities in the saddles of accoustic guitar, Why?

I'm puzzled by the little staggered stuffs etched in the saddles of most of my acoustic guitars. (Only one of my guitars don't have these discontinuities, and indeed it's not a guitar per-se, but rather an Octave Mandole).

What is their role, their effect on the sound ? How important is this ?

I'm tempted to think it is related to the temperament used on guitars. But I do not see clearly how/why. Any insight ? 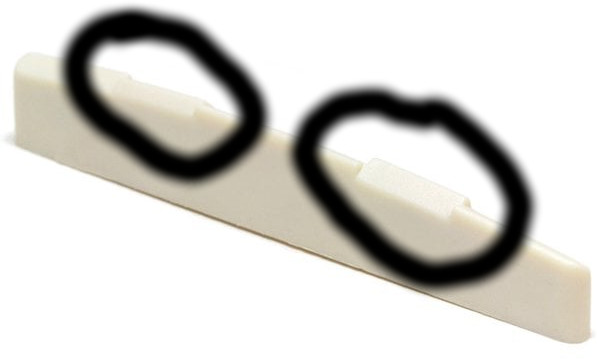 If the saddles are staggered, it's due to intonation. One may think that each of the six strings ought to be exactly the same length, but from a physics point of view that isn't so. Due to each string being a different density, and gauge, each one needs its own speaking length, which when adjusted accurately will make each fretted note sound better in tune.

On a lot of electric guitars, from Leo Fender's ideas, each saddle is separately adjustable, meaning even when different string gauges are used, there's the facility to change the intonation so the guitar plays in tune all over the frets.

On some, like here, there's a sort of 'average' compensation, which accounts for the different lengths. the B string is often slightly longer than the E and G it neighbours.

Everything Tim said in his excellent answer is exactly right. But I would like to expand on what he said for those who may encounter this question in the future and want a more detailed explanation.

Almost all guitars provide some type of "compensation" at the saddle (part of the bridge) as a means of adjusting the intonation so the strings stay relatively in tune up and down the fretboard. Without compensation, all fretted notes would play sharp due to the stretching of the strings during fretting. Strings of different gauges and density will be affected differently as they are deflected when pressed down to the fret to play a fretted note - which is why acoustic saddles will often have staggered offsets in addition to being angled.

The greater the length of the string (distance between the saddle and the nut) the less this stretching alters the pitch. As you play fretted notes closer to the bridge, the effect of the stretching increases due to a sharper deflection angle. Generally the thicker strings need to be "compensated" more (made longer) because the larger the diameter of the string, the more tension needed to stretch it down to reach the frets and the more the pitch is altered by the stretching of the string. This is why almost all steel string acoustic guitars will have a slanted saddle that makes the heavier strings longer.

Most electric guitars allow for fine tuning of the intonation for each individual string by providing for adjustments at the bridge/saddle for both length of string and the height above the fretboard as shown in the picture below. 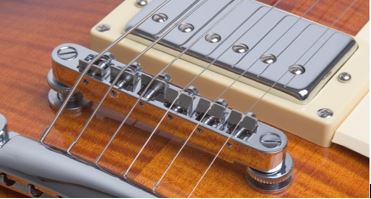 In the picture above you can see that the bass strings are set higher above the face of the guitar than the treble strings. This must be done due to the wider arc produced by the heavier wound strings when they vibrate. If these heavier wound strings were set as low as the thinner strings, they would slap against the frets when vibrating and cause fret buzz. You will see the same type of string height "compensation" (a different form of compensation) on your saddle for acoustic guitars as well. They will be higher on the bass side.

Also in the picture above, you will notice that each strings scale length ("compensation" to achieve optimal intonation) has been adjusted by moving the contact point at the saddle either closer to or farther away from the nut. In general, the thicker strings are longer. But you will notice that the 3rd string (G string in standard tuning) is longer than the strings on either side of it. That is because many electric string sets use a plain steel 3rd (G) string which is thicker than the plain steel core (the part that holds the tension) of the wound 4th (D) string. So even though the overall diameter of a wound D string is greater than a plain steel G string, the steel core of the G string is a larger diameter and therefore acts like a larger diameter string.

Conversely, most acoustic string sets come with a WOUND 3rd string which has a steel core that is actually thinner than the plain steel 2nd string. That is why most saddles for an acoustic guitar have the staggered offset for the 2nd (B)string. It is thicker than the core of the wound G string and the high e string, so it should be longer than either of the strings beside it. Since the pictured guitar provides the ability to adjust the intonation by adjusting string length ("compensation"), it could accommodate either a plain steel or wound 3rd string but would need to be adjusted accordingly.

For the reason explained below, acoustic guitars do not often have adjustable saddles like electric guitars. So guitar makers have played around with the intonation on acoustic guitars and arrived at formulas they believe will provide the best overall compensation and intonation for most players. Most provide the staggered offset for the 2nd or B string (described above) while some also provide a staggered offset to tweak the intonation on other strings as well.

Many things must be considered when designing the optimal shape and contours of an acoustic guitar saddle. The diameter of each string as well as the height of the string above the frets must all be considered. The bass strings which sit higher off the fretboard will get an added sharpening effect due to the greater distance they must be stretched to reach the frets.

You will notice that the contact points on an acoustic saddle for the wound strings is not as sharp as it is for the plain steel strings. This is so the windings won't hang up on the sharp edges. Many acoustic saddles are also adjusted to compensate for the sharper breakover angle from the bridge pin hole to the saddle that you have on the bass side due to the slanted saddle being closer to the bridge pins at that location.

Again referencing the picture of the bridge/saddle assembly on an electric guitar, you can see that it does not have nearly as much contact with the top as an acoustic saddle.

Additionally: An old luthier told me that the thinner-cored strings 'bend' as they vibrate nearly at the point of contact with the saddle, whereas thicker cored strings start their bend a little further away from the saddle, hence the need for a little more length.

Not the answer you're looking for? Browse other questions tagged guitar acoustic-guitar classical-guitar temperament or ask your own question.

9
Is there a standard efficient method of cleaning / maintaining a guitar?
10
Are there any books or videos out there that teach you SLOWLY and do not focus on learning TABS?
4
Guitar for super-small hands?
5
Guitar intonation issue - still flat but screw as far as it'll go
2
Colour of keys in the era of equal-temperament
4
Is there any support for microtonality and temperaments in (or beyond) the MIDI specification?
13
How to avoid unwanted scratching/squeaking/hissing noise from the fretting hand when playing hi-gain electric guitar?
2
Jazz guitar chords: knowing chord names vs what sounds good
2
Ribbon mics and Focusrite Scarlett USB audio interface
2
How does the action (distance between fret and string) of a guitar affect the tone / sound / timbre?