What's the point of diatonicism if we don't follow it? [closed]

Ask Question
Asked 1 year, 1 month ago
Active 1 year ago
Viewed 234 times
3
Closed. This question is opinion-based. It is not currently accepting answers.

I'm 2 years into music theory. Today, in class, I was part writing in the key of Cm. When I got to the V7 chord, I was corrected because I wrote a Gm7 (Vm7). Now, I'm aware that the V chord in a major/ minor has always been dominant, and therefore I've learned it that way. This is an elementary mistake for me. Yet it got me thinking about the way we're taught that diatonic chords, the entire basis of a key, is deemed arbitrary or inferior because a specific tone (7th) sounds stronger when it's raised a half step. If I want to raise the 7th I'll call for a harmonic minor; to me they're not interchangeable, so "it's assumed harmonic because it's minor" isn't an explanation. If so, it'd change more than the V chord. I get it, our culture and our beloved genres use this V7 chord, but it's disregarding the fundamental 12 tone musical scale. Why do we learn a system only to then change it down the road due to preference?

As Tim’s and other answers say:

In music - like in most situations of life - first was practice and then theory! First were the modes, the tetrachords and later the accidentals came up and the theory of lead tones and functions was created or invented.

I think we have to recognize what for we are taught the rules in music theory and why we are asked to follow them:

Stupid - when we have teachers who don’t have this perspective and lack this horizon and background.

Diatonic as a term is nebulous. Some say it's only related to the major key notes, others are happy to include the minor key notes too.

For those happy in the latter category, they must accept that there are more than one set of notes which correspond to 'minor'.

That, to me, means there are 9 notes which are all acceptable to use (and can and will be used) in any minor piece. No 'rules' will have been broken, and as long as the composer is happy with the sound, that's that.

We humans love to make up 'rules', etc, and put things neatly into categories. Hence diatonic. But in music, thank goodness, rules don't (or shouldn't) rule. They may be useful as basic guidelines, and as such, are quite helpful to beginners, to 'keep them safe'. As we study music, it soon becomes apparent that the 'rules' are there to get broken, often. Bit like life?

The 12-tone scale will not give you the sense of tonality that you are associating with diatonic. I think you are thinking of the 8-note scale.

Why are non-diatonic notes and chords used? For interest, for harmonic movement, and for better melodic lines. Most songs do not stick with just the basic key. Secondary dominance (V/x, vii/x) chords are often used. The V7 in harmonic minor could be called a borrowed chord from the major. The major IV in melodic minor could be considered a V/vii (minor of the natural minor). The dominant V7 adds a stronger harmonic movement because of the leading tone. However, it is not always used in minor. In many cases, especially under a descending melodic line or in places that are not cadences, the minor v is used. Using non-diatonic chords does not disregard the fundamental scale. They are enhancements.

Today, in class, I was part writing in the key of Cm. When I got to the V7 chord I was corrected because I wrote a Gm7 (Vm7). Now, I'm aware that the V chord in a major/ minor has always been dominant, and therefore I've learned it that way. This is an elementary mistake for me.

Of course writing a Gm7 in the key of C minor isn't wrong in itself - it's diatonic to the C minor scale, after all.

It may be that you or your teacher were wanting to aim for a certain more specific style or effect in which the major V7 was more appropriate, in which case you might call the Gm7 a 'mistake'.

Yet it got me thinking about the way we're taught diatonic chords, the entire basis of a key, is deemed arbitrary or inferior because a specific tone (7th) sounds stronger when it's raised a half step. If I want to raise the 7th I'll call for a harmonic minor; to me they're not interchangeable, so "it's assumed harmonic because it's minor" isn't an explanation.

There are lots of way to construct melody and harmony that sound subjectively good.

Sticking to a set of notes and chords constructed from the diatonic scale can sound great.

Using notes and chords without restricting yourself to the diatonic scale can also sound great.

Very often, melody and harmony regarded as 'minor key ' does not stick to a 7-note diatonic scale. The three 'versions' of the minor scale allow possibilities beyond the strictly diatonic.

but it's disregarding the fundamental 12 tone musical scale.

As other posts have said, I think you mean the 'fundamental 7 note' scale, i.e. the diatonic scale.

But there's nothing really 'fundamental' about the diatonic scale. it's a scale that allows a certain set of possibilities.

Arguably, any teaching that leads the student to believe that the diatonic scale is 'fundamental' is poor teaching. It is culturally important; it allows a fantastic set of musical possibilities, and it is the basis of our notation system. But there's no real reason to consider it a fundamental principle of music.

I'm updating my answer after re-reading the question and the commentary on other answers.

You are leaving out the details of the assignment, but if it was to harmonize something like this...

...it's critical to understand what Roman numeral system is being used.

The more or less modern standard is that upper case is used for major chords and lower case for minor. In the case of V7 that's a dominant seventh chord, not a minor seventh chord which would be lower case as a Roman numeral, like v7. The difference in the symbols and the treatment of the ^7 scale degree are like this...

It seems you misunderstood the meaning of upper case V.

I'll leave my original answer below.

To be clear this is the thing often presented...

...deemed arbitrary or inferior because a specific tone (7th)...

I think you are more or less right. Root position triads on all the scale degrees doesn't represent very well actual harmony practice. But, it's inferior to what?

I offer this as the antidote, a superior presentation of actual harmony practice: the Rule of the Octave. 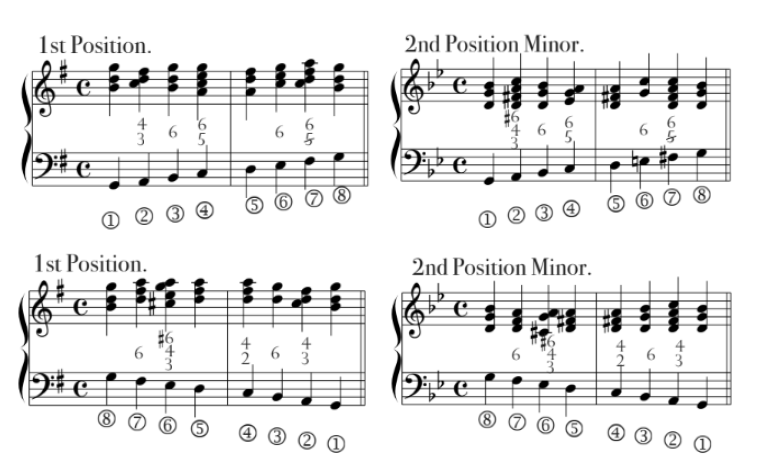 Historically the rule of the octave was a basic way to teach harmony. It was part of the figured bass system used during the Baroque and Classical periods.

Instead of treating each tone of the scale in the bass as a chord root, the rule of the octave in essence used root position chords on the tonic and dominant only and uses mostly first inversion and some second inversion chords on all other scale degrees in the bass. The direction of the bass is important. Notice the difference in harmonization of the mediant and subdominant degrees when the bass is ascending or descending.

I suppose the real answer lies in the continued development of music after the Baroque and Classical era. When new artistic paradigms emerge the historic tendency was to reject old methods. They stopped teaching the old way to make something new.

But that explanation doesn't offer much practical help. I think the important thing to understand is the major/minor system has always been a flexible system of diatonic with characteristic chromatic inflections.

Also, don't mistake this as some kind of classical music technicality. The last rock song I looked at which displays this principle of tonal flexibility was Metallica's The Unforgiven. It changes between plain diatonic and the raised seventh in minor to create a proper dominant.

Of course it doesn't help students that while a huge variety of super common music displays this characteristic tonal flexibility most textbooks start with diatonic harmony and then save the chromaticism and minor key harmony for a second stage or advanced level. It takes about a year to get there in a typical curriculum. Meanwhile the music you hear all the time is rarely purely diatonic!

Not the answer you're looking for? Browse other questions tagged theory harmony learning functional-harmony or ask your own question.

2
A better word for diatonicism?

2
passing chord preceding 4th in minor scale?
0
Transitioning from E minor to an “Asian” G major
5
What's going on in measures 11 - 16 of Beethoven's Sonata Appasionata?
4
Chromatic 7th chords going upwards in Beethoven
5
Is there a way to make a Minor key sound “less dark”?
2
Why harmonize non-diatonic notes with major 3rds above, in a “minor key” context?
3
Minor Key (and other key?) Roman Numeral Analysis
5
What chord is this, is it quartal, and what's the theoretical mechanism that allows it to sound this way?
21
Making Sense of Blues Soloing; differentiating major/minor pentatonics
1
Why do parallel keys matter?