Ask Question
Asked 6 months ago
Active 6 months ago
Viewed 105 times
-1
Closed. This question needs to be more focused. It is not currently accepting answers.

For the G and the E string I believe the amount of lines that separate that note from the base. But, correct me if I am wrong. However, how would I discern say the first F and the second F on the D string or the first B and the second B on the A string and for every other note for that matter for what ever rule should apply.

You really need some guidance on how to learn the violin. If you can't afford a teacher, at least get some method books (this site doesn't do shopping recommendations but google for "violin method books" will find some).

For example your idea of "begin with scale exercises at up to three octaves, with speed increasing with the metronome by notes per beat" is completely misguided. If you look at an exam syllabus like ABRSM there are no three octave scales at all until Grade 5, and you are not required to play (almost) any scale in three octaves until Grade 8. With a good teacher and a student who works hard, reaching Grade 5 will probably take at least three years, and Grade 8 will take a few years more. Average-ability or poorly-motivated students will take longer.

The way to start is with your left hand in "first position" only, so you play A B C with your first three fingers on the G string, E F G on the D string, B C D on the A string, and F G A on the E string. Forget about higher notes. When you have learned how to play those notes in tune, you progress to adding sharps and flats, in the same range. And after that (expect it to take a year or so) you start learning the "higher positions" shifting you hand down the neck of the violin.

So I found the answer without a doubt. It is at https://www.violinonline.com/fingeringchart-advanced.htm

There is an example of it in Vivaldi's Four Seasons that they showed https://www.violinonline.com/colorall_fourseasons-springmelody.html

The numbers over the notes on the staff indicate to what position each note is played. That answered my question. Thank you for all who tried to answer.

I'm not a violinist, but I bought a cheap one to play around with. Of course the very first problem was everything was horribly out of tune! 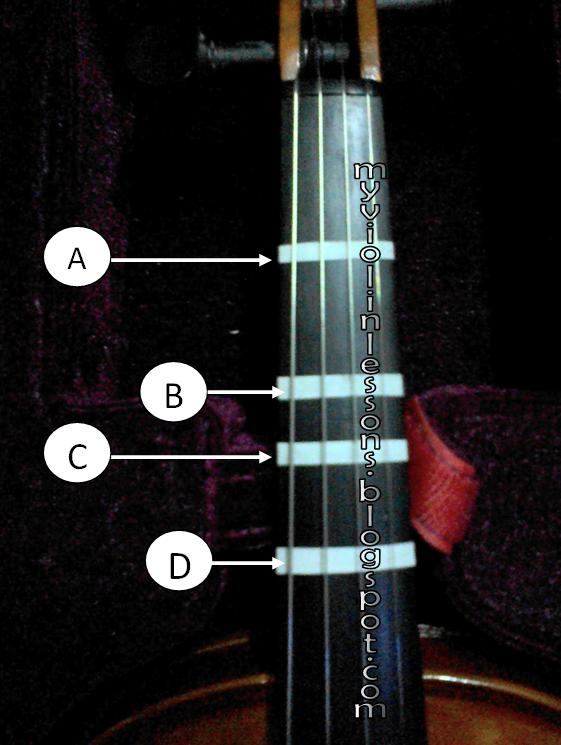 That doesn't account for all of the half steps, but you can just place your fingers between the tape marks for those half steps.

I get the impression that some people frown upon using tape. I guess they want the player to feel the hand position and hear the intonation. I understand that. Truthfully, it did feel like looking at the tape lost it's usefulness after a short time. It seems much less a visual fingertip targeting thing than a matter of holding your whole hand with good form. Sort of like standing with good posture. If the held is held right, you fingers seem to fall into the right places.

The part of your question about reading sheet music is a bit confusing. If you cannot play some basic scales and arpeggios, you should work on that and select music to read appropriate for what you can actual do on the instrument. Simple folk tunes, Christmas songs, that kind of stuff.

Playing the mandolin can be helpful. They are very similar in size.

I don't know how to go from here though. Drawing on it did not work it just got smudged out. Maybe put on thin strips of tape?

It did help playing with an automatic tuner closeby. Then I saw if I was too low or high.

One of the keys to playing the fiddle is knowing where to place your fingers. At BGD, I give both notation and tablature (a count system) so that all players will know what note to play and which finger to use.

Before we start, I might wish to distinguish between finger positions and hand positions. In violin tablature, the fingers are counted 1 through 4, with the index being finger no 1 and since the pinky being finger number 4. Let’s specialize in the G string. If you begin to near the nut and slide your finger toward the bridge, you'll eventually get to a different G note, exactly one “octave” above the open G. Fiddle music uses a scale, which divides this octave into 12 even-tempered intervals called half-steps. A half-step is usually referred to as space from a natural to a point. From the open G to the octave G are 12 half-steps, then there are 12 possible finger positions. Violin tablature allows a one-half step higher, to the note earlier the octave point. Since there are four strings (G, D, A, and E), and 13 finger positions, there are a complete of 52 possible finger positions (56 counting the open notes). Since you want to move your hand to play all those finger positions, we'll also define a complete of six different hand positions.

The first seven finger positions are supported by the natural rest position of the hand within the 1st hand position. do that exercise: Curl your fingers at the knuckle then turn your hand toward you as if you're examining your nails. Now attempt to spread your knuckles apart. you almost certainly find that you simply can easily make a niche between your 1st and 2nd knuckles, and your 3rd and 4th knuckles, but not between your 2nd and 3rd knuckles. Now imagine that your fingers are curled around the neck of a violin, together with your first finger exactly two half-steps up from nut. this is often actually the “default” location for putting your fingers on the violin. There are two half-steps from the first finger to the 2nd finger, one half-step from the 2nd finger to the 3rd finger, and two half-steps from the 3rd finger to the 4th finger.

Not the answer you're looking for? Browse other questions tagged violin or ask your own question.

1
How would this chart continue going down all the way to the end of the finger board and continue to relate into the staff?

3
How to teach a young child the correct intonation on the violin?
1
Playing what you hum or whistle on the violin
3
Arco sulla tastiera
3
Difference between violin and piano sheet music regarding notes on treble clef
0
Another question regarding sheet music - piano vs violin or other string instrument
3
Mozart's violin bowing
2
Inferring Position Number, String, and Shifts From Sparse Fingering Notation
1
How would this chart continue going down all the way to the end of the finger board and continue to relate into the staff?
2
(Indian Classical) Violin note-spacing vs. Guitar note spaces
1
Steps to learn playing violin without a teacher