Beginner question about how to understand chords in musical notation

I have a question about how to interpret musical notation involving chords. In the first picture, I can see D minor chord but do I play it with right or left hand? And what notes do I play with the other hand?

If someone is able to clarify this, I'd be very grateful, as it's been confusing me a lot! Thanks! 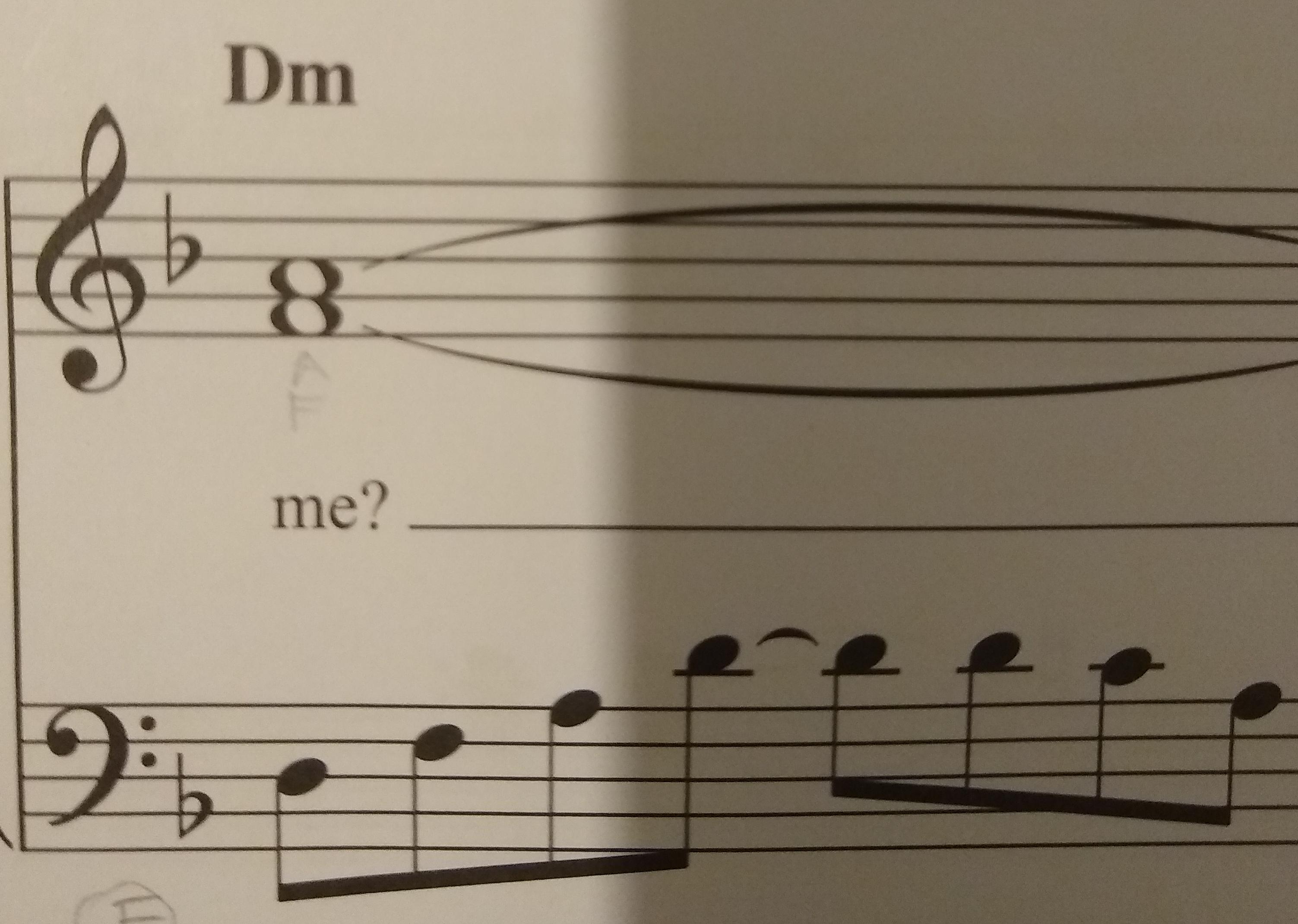 And similarly, do I play F major with my left hand? What do I do with my right hand?

The notes and chord symbols are two separate complementary things. 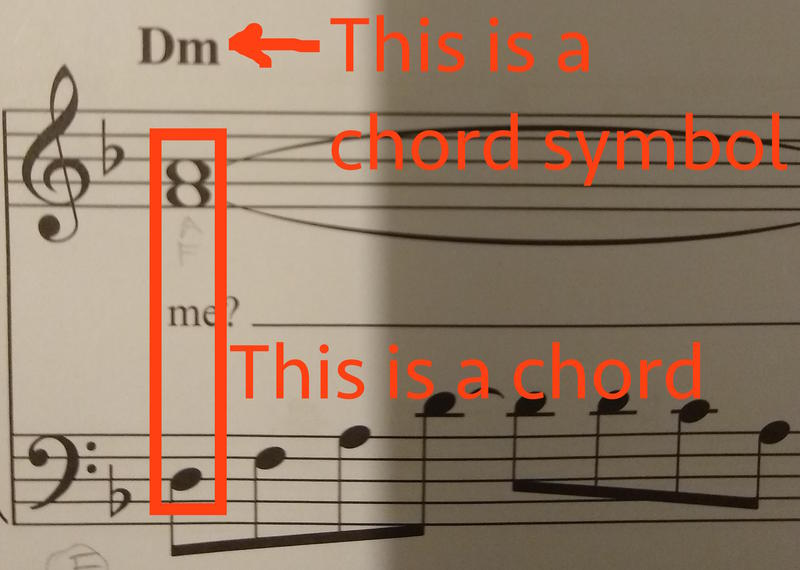 Here are some examples of music that can be labelled with a Dm chord symbol. Often in song books the chord symbols are simplifications and approximations of the notes, to make it easier to play, or because the exact notes aren't deemed that important.

In the last example, one might argue that the chords are really Dm, Dmmaj7/A, Dm7, ... etc. But it works just as well if a guitarist plays any Dm chord there, and the "maj7" additions would be just awkward to read. Good guitarists can read the notation and play the more complicated things.

Chord symbols are used in at least the following situations

The dots are used:

Play what is notated. The chord symbols describe the harmonic basis of what you WILL be playing.

Sometimes you'll see music that has just a melody line and chord symbols. In that case you'd be expected to make up a LH part similar to what is written.

But in this case, if you're playing this keyboard arrangement ON a keyboard, you play what it says. Treat the chord symbols as just for information.

Since you're playing piano, you would normally ignore the chord symbols. Your right hand plays the notes in the upper staff, and your left hand plays the notes in the lower staff. The practice of printing chord symbols in sheet music was originally for the benefit of people playing guitar or banjo or ukulele or autoharp or the like: chord instruments that can't usually play all the detail present in a written-out piano part. Such an instrument could play along in addition to a piano or instead of the piano.

Alternatively, a pianist who wants to play in a more improvisational way can also ignore the notes in the staves and play the chords. The right hand generally plays the chords indicated above the staff, and the left hand plays the root of the chord unless a different note is indicated with a slash following the chord symbol, for example Dm/C, which means "play a D minor chord with a C in the bass."

Piano players using the music will play in one of two ways. The basic way is to play the notes shown on the treble clef with r.h., and those shown on the bass clef with l.h. Very straightforward.

The chord symbols shown are there for guitar as much as any, as a guitarist would probably play chords and read those letter names.

A piano player might use the chord symbols to embellish what he's playing - it says Dm, so he could play notes D F and A - in any order, with one or both hands, depending on style - his and that of the music, as well as considering what other instruments or vocals are around it all.

In the top example, there's F and A held as a 'chord' with r.h., and the l.h. plays a Dm arpeggio for the bar. A good pianist would know, from reading the dots, that that's what it is. Others may decide to read the 'Dm' above, and play a D and A together, l.h., and F A D r.h., for instance.

When playing sheet music as written, you play the notes that are shown. At the start of the passage you showed, the F and A above middle C are written, and the D below middle C is written. Therefore you should be playing those three notes at the start of that measure.

In the edition of the Gershwin preludes I play from, part of the second prelude consists of chord-like notes in the upper staff and melody-like notes in the lower staff, somewhat like the music you have shown. (In the Gershwin prelude, however, the chords are repeated several times a measure rather than held.) There is a note printed over this passage that says, "Optional Version: Reverse Hands". Here the written sheet music itself is suggesting you could choose to cross your arms one over the other to play the lower notes with your right hand.

I play that passage using my left hand for the lower notes and my right hand for the upper notes. I decided I would rather try to become good at playing a melody with my left hand than to play with my arms crossed over. But that was a choice I made, not something dictated by the written music.

You'll have to understand that sheet music of Pop songs never can represent the original performance. They can give you the idea of the notation of the tune (the pitch will be correct but the rhythm is hard to notate) and also the notation of the chords is mostly an idea what a piano reduction could look like. So you are free to play exactly the written notes or to embellish them with additional chord tones or arpeggios or rhythmic patterns just as you like. The chord letters will help you to analyze what chords are used - maybe by the original version or any other interpretation. And you even can search for other fitting chords. As a beginner like you it will be sensible to play first as written and then to try out other chord riffs that will also fit. These chord signs are very useful and helpful to understand the harmony of other new songs you plan to play, so it is always beneficial to pay attention and not ignore them. You will be also able to play the song just from a lead sheet with only lyrics and chord notation (chord letters) and make you free to improvise and play without sheet music.

I was going to suggest something slightly opposite of Lee C. I've found chords provide something of a shorthand which enables the dot information to actually be consumed faster, particularly when sight reading. When Dm appears above the staves, one doesn't have to read each individual dot but only recognize the particular pattern in which the D minor dots are assembled. For example, seeing an A as the lowest note in the bass clef, it would be natural to play it with the little finger of the left hand, but the chord would influence how the other fingers of the hand would instinctively be aligned above other notes, i.e., above D-F-A in Dm, C#-E-A in A major, C#-F#-A in F#m, and so on.Especially when sight reading at fast tempi, chords provide a very useful guide to quickly grasp the structure and articulation of the dots.

In addition to other useful answers... there is more to "a chord" than just playing the triad or triad+seventh. Choice of inversions and other arrangements of the notes is part of the art of playing from chord-notation-only charts... and even in some very simple traditional music (for example, Xmas carols), specific choice of "voicings" of chords is part of the sound people expect. So in those cases just exactly play the notes written-out, rather than a (naive choice of) triad, etc.

When you are more experienced, you'll be able to make extensions of those traditional voicings that have a compatible sound with the traditional ones. But, until then, people who know those traditional songs very well may find one's "improvisations" jarring and disappointing. :)

17
How to memorize seventh chords and inversions on piano?
7
How do I play these broken chords on a piano?
7
Question about playing chords
6
Key-agnostic voicing-based notation (piano)
5
Rhythm question about piano sheet notation
6
What do these notation marks mean?
4
Major scales are used to build harmonized chords, so what about the other scales?
4
Shell and inversion notation for lead sheets