Harmony, lead and backing, notes outside the chord

Okay so perfectly happy with the principle playing of say a straightforward major chord and playing a notes of that chord over the top of it. Also happy with the idea of playing say a more dissonant chord like a diminished and playing say b5  over that. We are playing notes that appear in the chord. But is there any place for playing notes not in the chord?  We are always told to mirror the chords notes in the lead.  I like angular stuff, but it can still be angular by using weird chords and progressions, so should we limit to that and keep on mirroring the notes in the chords?  I realsise an answer is you can do what you like, but lets take that as given.

It's more of a guideline to say 'use chord tones and diatonics'. It's a great start point, made even simpler with 'use pentatonics instead'. The latter extracts two notes which can sound bad, and the former keeps it all safe and together.

The trick about using 'the other notes' is more about where they go in a bar. They are often used on the weaker parts - off beats, final beat, and so on.

However, they can and do work wherever you want. Take the sequence B C E♭ E G♭ G, all played as quavers in a 3/4 bar. The two chromatic notes shouldn't fit, but they do.

The basic ideas you quote are really to help early players make music that sounds fine. If they were told anything goes, they would be playing seemingly randomly, with no datum points, and nothing to guide their playing. Start in a structured way, and spread out from there?

But is there any place for playing notes not in the chord?

This is a basic part of understanding homophonic music (essentially music that is chords plus melody) called non-chord tones (nct).

There are many nct's with standard definitions like: suspension, passing tone, appoggiatura, etc.

The principle behind non-chord tones is they are dissonant to the chord being played but then the dissonance is resolved either by the nct moving to a chord tone (usually by step) or by holding the dissonant tone while the chord changes to one where the held tone becomes a member of the chord.

The ebb and flow of consonant chord tones and dissonant non-chord tones is an important dynamic force in melody. The set up of dissonance which then gets resolved - in traditional harmony the dissonance necessitates resolution - gives the melody forward motion.

Nct's can be diatonic or chromatic and metrically accented or un-accented.

Many, many melodies contain non-chord tones.

One thing to keep in mind is harmonic analysis is needed to determine what is a bona fide chord and its tones versus non-chord tones. Most of the time you probably don't need to worry about this, but you should be aware of it. Let's consider three examples in the key of C major: 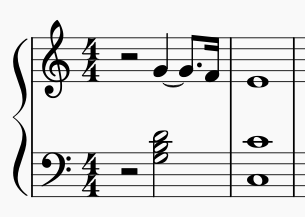 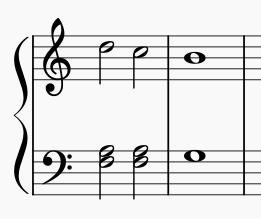 ...the first chord could be called ii6 - D minor in first inversion - or you could say the top D is an appoggiatura over an incomplete F major chord IV. Either chord ii6 or IV are a kind of subdominant function leading to the G major chord V so it's kind of "six of one, half dozen of the other." 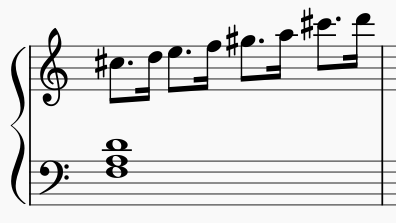 ...the accompaniment chord is a D minor chord in first inversion. In the treble are metrically accented C# and E. Tones are present that match chord symbol Dmin9(M7), but is that the bona fide chord? How do you decide? There isn't one absolutely right answer, but a common way to look at it is ask if dissonant tones require resolution. When a dissonance doesn't resolve there is a good case for considering the tone a member of an extended chord using sevenths, ninths, etc. In the example above the C#, E and G# all move up to chord tones. Even though the tones are metrically accented their movement from dissonance up to chord tones suggested resolution of dissonance rather than dissonances of bona fide chord extensions.

Potential ambiguities like this come up all the time. Make sure to look at the overall context of the music to understand what's going on.

If you have in mind the harmonic framework of your tune and at least one chord tone per beat is present, then you can really try out "everything goes" because then all other notes are chromatic approaches, passing tones or changing notes (cambiata) (they can be diatonic or chromatic.)

What chord do you mean by "the chord"? :) Look at it this way: whatever notes you play, contribute to the harmony. If you play the notes on rhythmically strong time positions where "chord tones" are perceived, the note combination effectively becomes the sounding chord. Let the sounding chord be the chord! If you play a ♭5, then the chord is at least an "add ♭5" chord. Maybe it wasn't the originally planned or designed chord, but it is the chord you're playing as a group. A bass player can change a major chord to a minor-seventh chord by playing e.g. a D when others play an F major. F/D = Dm7. From this perspective it is not possible to play notes "not in the chord", because whatever you play as chord-tones is in the chord. And then the whole problem kind of vanishes, doesn't it? Or like you say in the comment, the question becomes, "do I like the new chord" - which pretty much summarizes the whole thing.

To reiterate. If you play your note so that it's perceived as a chord-tone, there are two chords:

If you had played a seventh, you would have made the chord a seventh chord.

If you play the notes so that they're perceived as passing tones, then you still contribute something, but not necessarily enough to change the perceived overall chord, i.e. how someone might transcribe what they're hearing as chord symbols.

If your song is in C and the base chord is a C major, and you play a strong F# on a strong beat, then you give the chord a lydian feeling. But nevertheless, it's not the same chord anymore, from a listener's point of view.

I think this is an important point to understand for soloists. Chords are not rigid monolithic objects, you can change them with the notes you play. Some guitarists seem to think like, chords are given from somewhere and can withstand any kind of mishandling, playing random notes over them, as long as the notes come from the right scale. Not so! Whatever you play, does at least something to the harmony - and if you play so that your notes are perceived as chord-tones, you can make a big mess if you play randomly, and using the right scale won't save the chords from your mutilation. You should understand what you're doing to the chords. :) This is (I suppose) also why the minor pentatonic scale is so popular - you can play it pretty randomly over chords with limited damage.

33
What is the relationship between the melody line and the rhythm chords?
5
What's the term for the intervals between notes within a scale that produces a chord
5
What kind of chord progressions am I using?
1
How to determine the key and write melodies for a chromatic chord progression?
4
Does the bass always have to harmonise with the lead?
3
How can I learn the theory behind chord progressions?
4
Tonal harmony: 18th century counterpoint vs. Accessible contemporary harmony and composition
2
Do melody notes over chords basically change the underlying harmony and the chord extension?
3
Do major seventh chord usually put the major seventh above the root?
0
Does this progression have a name? If then what is its name?