Does the sus4 work better on a dominant chord?

Is it just chance or does the sus 4 usually happen on a dominant chord. The beatles used this often and I have only examples where they used it on dominant chords. Is this because the sus 4 creates more tention over dom7 chords? Also, in the vocal melodies in many songs, the sus 4 note is used a lot but not ever over the triad version of the chord. It almost always appears when the 7th is used.

Can someone please shed some light on this?

sus4 works on every major and minor chord as you can see e.g. in Bachs little prelude BWV 924

It is also used in the final chord on the tonic Isus4->323 (instead of the plagal cadence IV-I, if you remind this kind of "amen" as the final clause of "let it be" (famiredo ... of course we have here more than just the sus4 ... but here's another well known example :

It almost always appears when the 7th is used.

Can someone please shed some light on this?

The light may turned on if you write down a progression of chords in the circle of fifths or a fifth fall sequence: you will recognize that the 7th of a chord will be the suspended 4th of the next chord ... etc.

could be this what you mean?

When the label sus4 comes up things get tricky, because that label is from jazz/rock/pop which so often doesn't actually use the chord as a real suspension.

This is a traditional suspension... 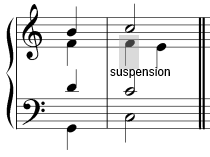 ...the first bar is a G7 and the second bar is plain C major, but notice the F - the seventh of G7 - is suspended (held over from G7) in the first beat of the C chord and then resolves down to the E on the second beat.

The typical thing is for the sus4 to happen on the plain triad after the dominant seventh.

This is not the only way a suspension gets handled, and sometimes the sus4 chords are used without any resolution, but the example above is the traditional origin of suspensions.

Also, there is a particular harmonic sequence of seventh chord that may interest you. It isn't exactly what your question is about, because the suspension involves a seventh rather than a fourth. Here is an example...

4
Chord construction using the minor scale
3
Slash chords nomenclature/reading convention
1
Is there a way to determine the flatness (or sharpness) of the 4th note of a chord from its name?
1
A#sus4 or A#add11 Chord?
8
chromatic descent on minor chord
2
How To Build and Name 7th Chords
2
Understanding Cm7-F7-F#Maj7-G# progression
6
Is a I sus2 chord the same as a Vsus4 chord?
2
V7 and the minor scale
1
Using an augmented chord to modulate to a distant key, will this work?