How can I transcribe chord charts into guitar tablature?

Is there any way to extract tabs from the chord charts?

There are many songs available only as chords on the internet. I want to know how to go about creating tablature notation from the chords.

Chord sheets simply tell you what chord fits against each part of a song. You can play a reasonable guitar accompaniment to the song simply by fretting the chord's shape and strumming. On other instruments, you can form the chord in other ways, for example by playing a triad on a keyboard. A chord sheet does not provide enough information to know more than that.

For example, on the version of a song you listen to on the radio, the guitarist might strum a particular rhythm pattern, or fingerpick a pattern, or play a countermelody that fits the chord. The chord sheet tells you none of this - but they are a good basis to build upon.

However, if it helps you to learn, you can convert directly from the chord names on a chord sheet, via a chord dictionary, to a tab.

In the example below, we turn a C chord from a chord sheet, into a tab. To do this we look up the C chord in a chord dictionary (on the web, or in most guitar books). We then copy the fret positions from the chord diagram, into a column on the tab. 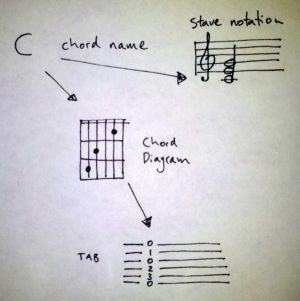 Every chord has multiple voicings on the guitar. If what you're playing doesn't sound like the song on the radio, it may help to try a different voicing. For example, the voicing for C above, with its open low E string, will sound different from a barre chord with the E shape up on the 8th fret, or from the A shape barre chord at the 15th fret.

The diagram also shows one way of notating the C chord on a musical stave. Notice that I've chosen a different voicing for the stave, from that on the guitar diagrams. The stave shows a triad using the root note of the chord as the lowest note: C, E, G. The guitar diagrams show the 6 note chord E, C, E, G, C, E.

Slim has a solid answer. To supplement his answer with some resources: There are many chord dictionaries online that can provide you with a comprehensive list of tablature for any given chord.

I also created a tool that allows you to type in, for your example, "Cmaj tab" and it will give you all of the tab: https://gravitymusicschool.com/bazzle/Cmaj/tab/guitar

Not the answer you're looking for? Browse other questions tagged guitar learning chords tablature or ask your own question.

9
How can I learn timing from a guitar tab?
1
How to find the best solution on the fretboard for the sequence of notes in a music?
7
How to read guitar tabs more effectively and efficiently?
1
Will learning guitar tabs help me improve at learning other tabs/playing melodies?
4
How to create guitar tabs with similar notation to Japanese Band Scores?
5
To what degree do professional pit band guitarists follow the chord charts for pieces?
5
Old Books with chord progression charts or matrices?
4
In Guitar Pro, how do I specify fret numbers for a chord?
4
What is Sanz's tablature for the baroque guitar?
0
How to read this guitar chord cheat sheet?