Where to cut off a sonata theme for Theme and Variations?

I am thinking of writing a Theme and Variations based on a sonata. With sonatas, I tend to gravitate towards the first movement, which is most often in sonata form, and this poses a bit of a problem. Namely, where to cut off the theme and start variations? With rondos and symphonies, this cutoff point is clear, but for different reasons. In a rondo, it is clear because it is the section that comes back multiple times. In a symphony, it is clear because of orchestrational changes that coincide with the change in theme.

With piano sonatas, not really, especially Mozart sonatas. Obviously, I would be including the first theme, but often the first theme ends on a half cadence, and the transition ends on the same chord as that half cadence, but is modulating in the process. This is what gives the smooth movement from one theme to the next in a sonata. So the first theme on its own or even combined with the transition feels like an incomplete entity, like it has been amputated, even at the last phrase ending. But I don't want to include the entire sonata exposition if I don't have to. Especially because the second theme tends to be more developmental than the first theme anyways.

As an example, take Mozart's Piano Sonata in F major K 280. These are the 2 possible cutoff points that don't include the more developmental second theme: 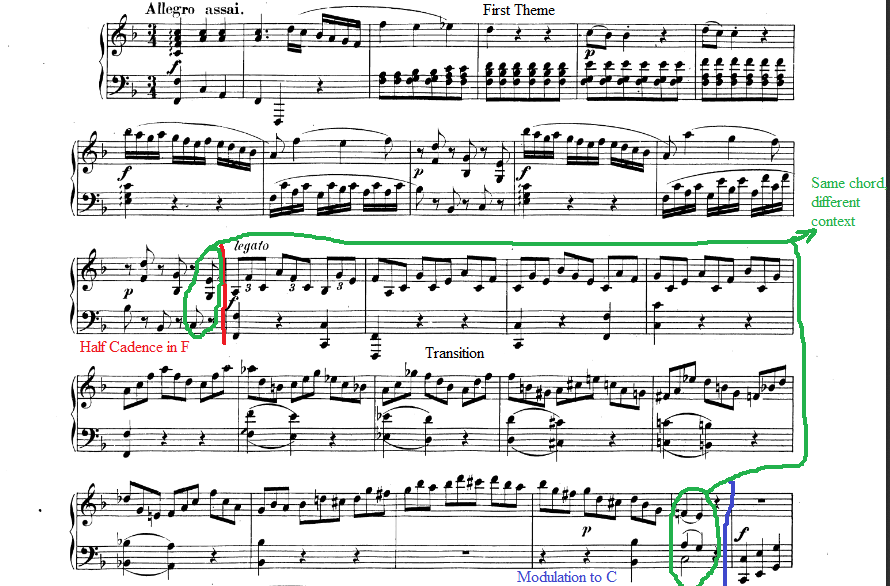 On the one hand, if I cut it off at the end of the first theme, I don't have to worry about embellishing triplets or having it feel too developmental(like mid theme developmental, not variation developmental). On the other hand, if I cut it off at the transition, I have more wiggle room for variations and thus can probably do more variations than if I just have the first theme alone. Mid theme development is also one of many reasons I don't usually use the slow movement as my source of melodic and harmonic material in a Theme and Variations.

...often the first theme ends on a half cadence...

I think you have mislabeled the cadence ending the first group of themes. It should be... 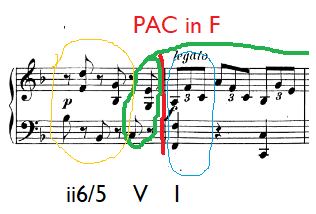 At that point there is an elision in m. 13 where the transitional phrase takes up a triplet figuration an modulates from F to C.

It seems strange to select the transitional phrase for theme and variations.

From a purely structural view you could play the first 12 bars and simply end on the F major chord of m. 13. Just hit the full chord but don't continue with the triplets.

The opening often just presents a bunch of short phrases in the tonic without modulating. This would seem to be a better place to play around with variations.

K 330 actually provides an example of how the initial statement on the tonic invites variation... 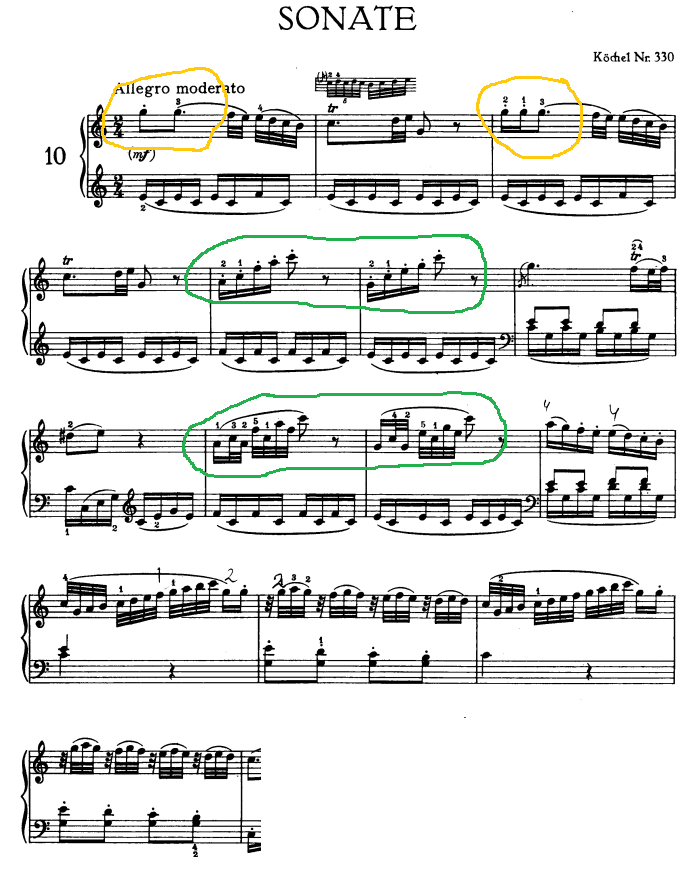 Maybe K 330 provides a kind of model to follow?

You could present the open theme on the tonic re-interpreted with different rhythmic figurations.

I'm not sure that you can do a whole set of variations that way, but that is a different matter.

You find a sonata (or sonatina) by a composer who wasn't very adventurous, and wrote music in nice textbook-like 4 8 and 16 bar phrases and sections.

That mostly rules out the Haydn, Mozart or Beethoven, but there are plenty of lesser known ones (though bear in mind they are lesser known for a reason!)

Not the answer you're looking for? Browse other questions tagged composition musical-forms or ask your own question.

1
Does Presto fit with a Minuet and Trio form?
8
How to make the dominant preparation less boring?
1
How to get a satisfactory ending to a Theme and Variations?
2
Is the divertimento a freeform sonata?
0
Can bagatelles be in Sonata Form?
0
How to turn Beethoven's fifth into a fugue?
1
How does Sonata Form fit into a Waltz?
1
First Movement of Mozart's Horn Concerto no. 2, is it Sonata Form or Rondo Form?