Why do F#6 and higher notes ring more than F6 and lower notes?

I learned Overworld Theme 2 from Super Mario Bros. 3 a few years ago, which features the nice bright high notes of A6, G6, and F6:

I noticed on my 80 year old upright piano that the A and G rang out almost as if I was holding the pedal (they just die a bit quicker), whereas the F did not. Upon experimenting I found that F#6 and any higher note rang like this. I thought maybe this was just peculiar to the acoustics of my piano but I recently got an electric piano that emulates a modern grand, and it does the same thing! Why is this?

As others have mentioned, those strings do not have dampers (the felt things that mute a note when you release the key). The reasoning is several-fold.

First, the higher notes have much less sustain than lower notes. The dampers wouldn't really have much effect since those notes die out so quickly.

Second, undamped strings are free to vibrate complementarily with other lower notes played on the piano (this is called sympathetic resonance). By leaving the top notes undamped, they are free to add depth and brilliance to other notes played.

Look inside the piano: there are no dampers for the highest notes. I don't really know why; maybe it's for some extra resonance (both for the high notes and in general).

I'm not 100% sure this is the reason, but it is something I noticed about the guts of a piano. I no longer have a piano available to check, but I'll stick my observations in here anyway. :)

At some point around the 2/3 point of the range of the piano, strings go from (mostly) wound to (mostly) plain. Plain strings tend to ring more, like you describe. Wound strings have more sustain (Due to more mass?).

Take a look at this image: 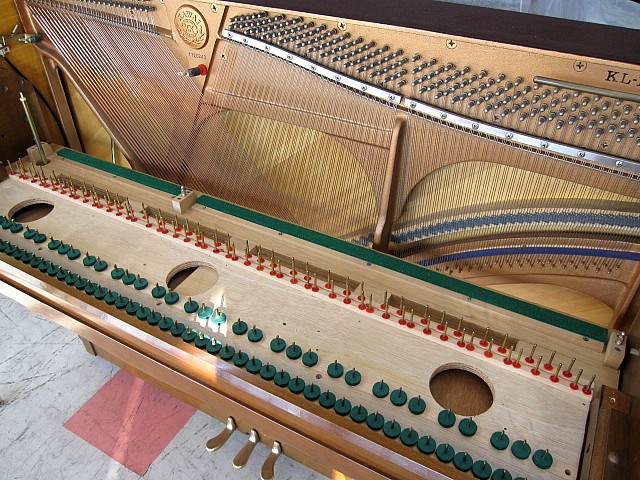 Notice the nearly vertical bar about 2/3 of the way over? From that point, at least on my former piano, the strings went from wound to having some wound and some plain strings.

Here's an image of a wound string:

And here's a plain (guitar) string: 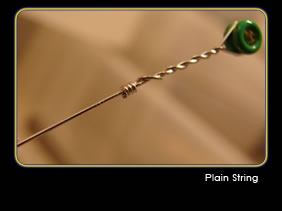 If one strikes a note (say C3--an octave below middle C) on an acoustic piano without the damper pedal and then with it, one will likely notice that the second note sounds slightly different--probably brighter. This is because the struck string will vibrate with energy not only at the frequency of C3, but also some other frequencies including C4, G4, C5, E5, G5, and C6. If the strings corresponding to those other frequencies are not damped, some of the energy at those frequencies will transfer to those strings, causing them to resonate along with the string that was struck.

If all one ever wanted to do on a piano was play notes that would sustain as long as the strings allowed, having all of the strings undamped would probably improve the sound. A lot of music, however, requires that notes not sound for anything near the durations achieved by the lower strings on a piano. Consequently, the lower strings need dampers to avoid allowing music to be played at a reasonable speed without turning into mud. The upper strings on a piano have a natural decay rate which is much faster than that of the lower strings; additionally, their higher natural frequencies may allow them to add more brightness than would the lower strings. These two facts together have led piano makers to omit dampers from the upper strings (the fact that such omission saves cost probably contributes to that decision, but even expensive pianos generally omit the dampers).

6
Why doesn't a piano have dampers in the upper register?

8
Is there a more specific name for this instrument than "PVC instrument"?
2
Higher registers and lower registers of piano more difficult to play
2
Producing stereo sound from more than two speakers?
4
Are transposing instruments always written higher than they sound?
2
Is there a reason why certain instruments are more popular than others?
15
Musical systems with more than 12 notes
10
Piano Concertos: Why is Brahms 2 considered more mature than Rachmaninoff 3?
4
Why is there two notes in a row with more beats than the measure?
2
Difficulty reaching lower E to higher G in left hand on piano
4
Recently bought upright piano has at least one key ever so slightly deeper than the others. Is it detrimental to learning?