The lamenting section doesn't use an actual lament bass progression, but it is very melancholic. I have it at quarter note = 45 BPM and I have it marked Lento lamentoso, literally meaning slow and lamenting. The dramatic section is at quarter note = 160 BPM, for now anyway. I might slow that down a bit, but it is certainly at an Allegro tempo. The Allegro is in 2/4 time. Right now, I have the Lento in 4/4, but I'm wondering if I should have it in 2/2, given that the half note is a very frequent note value and the sixteenths tend to be on the fourth or last eighth of the bar. Both of these suggest a beat of a half note at a tempo of 22.5 BPM.

I do tend to see the half note as the notated tactus in 2 different tempo extremes, the extremely slow and the extremely fast. But it isn't just the tactus making me wonder if I should have the Lento be in 2/2, but also the conducting gestures for 4 beats and 2 beats. I know that conductors could probably get across a 4/4 to 2/4 switch and vice versa just fine by just switching between the 4 beat gesture and the 2 beat gesture. Or could they? Especially combined with the tempo change, I'm worried that if I simply stick with the 4/4, the orchestra will play it as though it is in 2/2 and thus way too fast. Most common duple meter to switch to when combined with a change in tempo that I have seen is 2/2.

For some clarity, here is an excerpt from the Lento Lamentoso section of my piece. I don't have the note values all notated correctly because with this solo piano version, it is more important for me to see the rhythm, thus all the double dotted half notes, even though in an orchestral score in 2/2, those would be better notated as a half note tied to a dotted quarter. 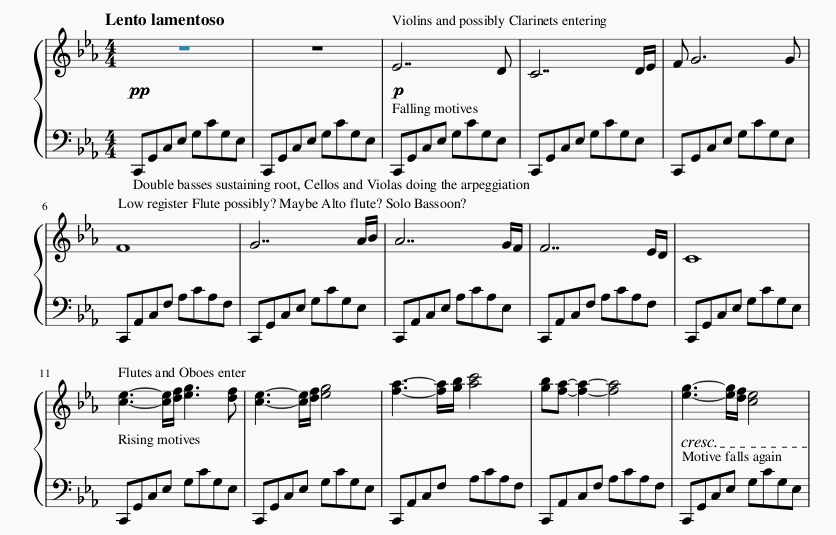 So, should I notate the Lento lamentoso section in 2/2 so that the conductor will only have to use 1 pattern and because the sixteenths that occur tend to occur on the fourth and last eighth notes of the bar? Or should I notate it in 4/4 like I have currently and trust that the orchestra won't play the Allegro twice as fast as wanted when the conductor switches from the 4 beat pattern to the 2 beat pattern?

Browse other questions tagged composition time-signatures orchestration or ask your own question.

101
Is there any real-world difference between time signatures such as 4/4 and 8/8?

19
What is the connection between time-signature, beat, and tempo?
0
How should I understand time signature?
1
How does one choose the correct time signature to match the tempo and vice versa?
3
I don't understand why multiple time signatures for the same theme
2
How to make my piece feel like a Presto
3
Time Signature Dilemma, should I change the time signature for my Scherzo?
6
Is 5/4 simple or compound?
3
Tempo conservation with Time Signature Change, How to notate this for Classical Musicians?