How do we name two chords a third apart from each other?

I know there is a term for two diatonic chords that are a thrid apart (and thus sharing 2 or more notes), but I forgot it.

There is another kind of chord pairing where the roots are a third apart but not in the same key, and sharing the same chord quality: chromatic mediants. Very different from your example, but I you might want to be aware.

You didn't ask, but it also may be interesting to point out a few common progressions featuring relative chords:

The reason I mention these examples is because root movement by third is often described as a weak progression. Obviously it isn't weak in the sense of ineffective when it is so commonly used. Weak in this sense more or less means root progression not by fifth. It does seem significant that these various progressions involve one of the relative chords being a tonic and then somewhere dominant harmony is used to make the tonality clear.

Strictly speaking "relative" is a descriptor for keys. From Grove's dictionary... 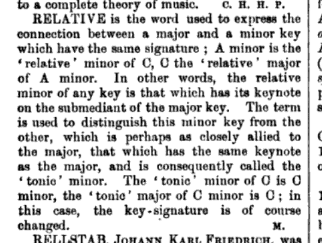 ...but people commonly use relative to describe chord relationships.

As the term applies to keys it's no surprise that when talking about chord relationships, relatives imply one or the other chord is a tonic, like I and vi in major keys or i and III in minor keys.

Not the answer you're looking for? Browse other questions tagged chords chord-theory or ask your own question.

10
How do you name chords in 20th Century Music? (Chords stacked in intervals other than 3rds)
6
How to name two-note chords (dyads)?
2
How many and what are the chords in a single key including relative harmonic and melodic minor?
2
What type of songs frequently use chords that are a half step apart (like the E and F chords)?
1
how to find right chords for a riff
2
How to identify and name Full Diminished Seventh Chords?
5
Term for two differently named chords that contain the same notes
1
How to tell major, minor, augmented, dominant and diminished chords apart?
2
How do I find suitable chords for a melody or a song? Or How do I come up with chord progression?
5
Are there any chords other than the dim7 and Fr. 6 that have two overlapping tritones?