Emulating the Beethoven's Fifth Finale without making it sound like it isn't original? Sounds hard

So, I got a comment from someone on a composers forum about the C major ending of my 10 minute orchestral piece, Escape from the Minor Trap, saying this:

Bar 187: I can hear a very triumphant Beethovenian orchestration here - lots of trumpet and Timp etc.

When I saw that, I figured he was referring to the Beethoven's Fifth Finale. He indeed was and said that I should emulate the scoring a bit in my C major section. So I have been listening to it. The timpani is easy to figure out. It is adding energy through it's rhythm and is only playing C and the G below it. The brass on the other hand are a bit trickier. However, I think I know what is going on.

There is some instrumental contrast in the Finale, often it is strings and/or woodwinds getting the main melody, but when the brass do get the main melody, often it is the trombone choir getting that melody. Since this is the piece after which trombones in the orchestra became standard, that makes sense. It's like Beethoven is saying:

Well, I could give this melody to the trumpets or the horns, but you know what? Since I am going to use trombones, why don't I show their melodic capabilities by giving them the melody while the trumpets and horns harmonize it?

I see the horns and trumpets(which are often doubling each other in the forte and fortissimo moments) doing 2 roles(3 in the case of the horns) on and off and sometimes even simultaneously, those being:

As for the trombones, when they don't get the melody, they are harmonizing the rest of the orchestra, most often on the first and third beats of 4/4 but sometimes on every beat of the 4/4(Most often it is the violins that get the every beat harmonies as triple and quadruple stops).

My Piece: The C major Section

Here is an excerpt of my piece, Escape from the Minor Trap, at the C major section as written for Piano Solo: 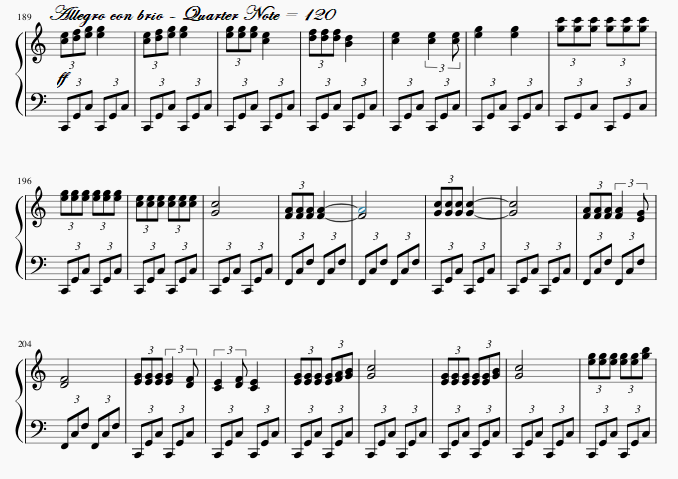 For those wondering if this is 6/8 written in 2/4 or actually in 2/4, it is actually in 2/4. The triplets precede the C major section. In the Eb major section of my piece is when these triplets in 2/4 start. In the C minor outbursts that precede the Eb major section, I reference another movement of Beethoven's Fifth, the First Movement. However, I treat the motive differently from the way Beethoven treats that same motive. And the instruments that play this motive are also different. It is Woodwinds + Brass in my piece that play the motive over a countermelody in the strings, whereas in Beethoven's Fifth, it is the Woodwinds + Strings primarily and without any significant countermelody.

So I'm not really emulating Beethoven's Fifth in the C minor outbursts in anything but the motive. And now this person on a composers forum is suggesting that I emulate the Beethoven's Fifth Finale scoring in my C major section. Now, how am I going to do that without getting a bunch of people commenting:

I can't believe it! In the Piano Solo, she had her own melody and everything. It was influenced by Beethoven, sure, but it was her own. Why in the world is she trying to emulate the very well known Finale of Beethoven's Fifth in her orchestration? Just because her scoring has a clearly Beethovenian influence does not mean she has to go the extra mile and make her ending sound like one Beethoven would write, and it especially doesn't mean that she should emulate Beethoven's Fifth. I'm fine with her using the Beethoven's Fifth motive but in a new direction, but directly emulating the most famous piece by Beethoven? That doesn't sit well with me.

Basically, I'm worried that if I emulate the scoring of the Beethoven's Fifth Finale, that everybody is going to see it as me stealing from Beethoven's Fifth, even if it is not my intention.

So, how could I emulate the scoring of the Beethoven's Fifth Finale without making it sound too much like the Beethoven's Fifth Finale? Just have the brass play similar roles as in the Finale and have everything else be different(In other words, have the brilliance of the trumpets + tympani, maybe even have the trumpets play the main melody in the first phrase, have the trombones harmonize, but have for example more countermelodies in the strings and/or woodwinds)?

Browse other questions tagged composition orchestration beethoven or ask your own question.

4
Modulating from A-flat major to C major (Beethoven)
15
What makes a piece sound like Beethoven?
3
Did Beethoven really usher in the Romantic Period?
5
How is Beethoven able to make so many sudden shifts in key?
7
Could this Scherzo by Beethoven be considered to be a fugue?
0
Can bagatelles be in Sonata Form?
8
Why is Beethoven's tempo so off?
5
How should I analyze this passage? As vii°7, V7, or both?