Are these suspensions or appoggiaturas in Haydn's Surprise Symphony?

The IB Revision Guide states that there are suspensions in the bars below (top line, violin 1). The bass harmony moves from C to F. The first 2 notes of the third bar in the violin B - A form tension resolution as found in a suspension, but even though the previous note at the end of the second bar is also a B, this note is not part of the harmony of C or F, so in my mind is not the "preparation" required for a suspension. According to the author there are 3 suspensions here, but I think the other 2 are the same. Am I wrong or would it be better to call these something else such as appoggiaturas? 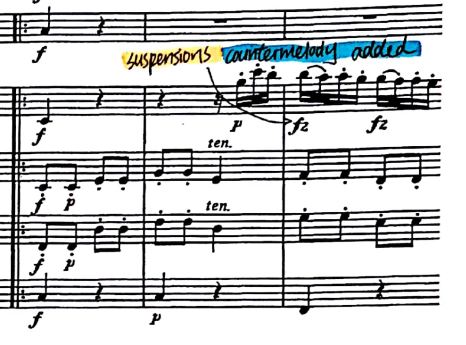 The distinction between suspension and appoggiature isn't set in stone, despite the opinion of some textbooks. And 'unprepared suspensions' are definitely a thing. I prefer to say an appoggiatura is just a suspension notated in small type as a gracenote.

However, if you're f0llowing an exam syllabus which insists an unprepared suspension must be called an appoggiatura, you'd better go with the flow.

I see two suspensions here (the second B and the second G), and three passing notes (the first B, first G and the final E). Can a suspension be prepared by a passing note? For this particular examination the answer seems to be 'yes'.

...so in my mind is not the "preparation" required for a suspension.

I agree with you, because otherwise you end up with just a generic notion of non-chord tone with no regard to approach or resolution. Since there are historic words for various non-chord tone type it stands to reason we should pay attention to the details that distinguish them. 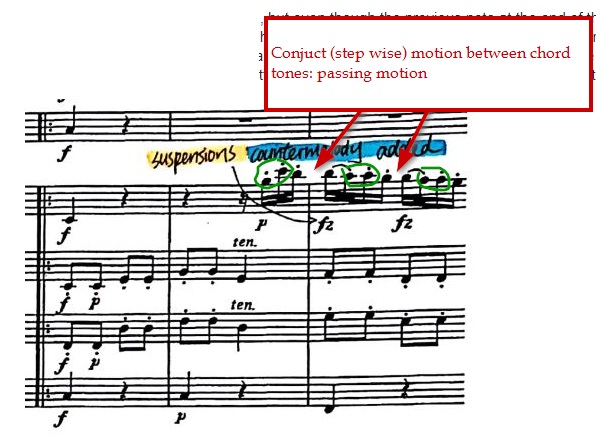 The definitions of appoggiatura I have seen specify an approach by leap so by that standard there aren't appoggiaturas here.

However, there is something called a sighing figure an accented, one step descent with a slur over it, a non-chord tone to a chord tone. I think sighing figures are thought of as a kind of appoggiatura. I see the term appoggiatura signing figure is often used.

So, while those tones may not fit a textbook appoggiatura definition, as a sighing figure that sort of have an appoggiatura feel.

3
Are these upper voices in this final passage from Handel a bona fide F7 chord or some kind of non-chord tones?
4
Rootless chords in Beethoven sonata?
3
Suspensions in 'The Long and Winding Road'?
3
Preparation of dominant ninth chord
1
How exactly do the rules of traditional voice leading apply to broken chords?
5
Can the harmony change at the resolution of a suspension?
2
Which modulation is correct? (amongst other things!)
1
Is this a deceptive cadence?
4
Does tempo affect use of non-harmony notes?
2
Four part writing: Does quality and amount of dissonances affect use of non harmony notes?