Repeated forte dynamics in more than 10 measures, What does that mean?

As I arrange the Scherzo movement of Beethoven's Ninth Symphony for a piano quintet(though I might expand this out to a sextet and use a double bass in place of a second cello), I notice something odd at the first fortissimo, repeated forte dynamic markings. I have seen repeated forte markings before, but usually this is after a dynamic change has occured within the measure(for example fortepiano for several measures followed by continuous forte, sometimes that looks like repeated forte dynamics until you zoom in and see that there are in fact piano dynamics marked right next to the forte dynamics).

However, that is definitely not the case in the first fortissimo of the Beethoven's Ninth Scherzo. Beethoven is definitely wanting to keep it at a loud dynamic here.

There are 3 reasons that I can think of as to why Beethoven decided to mark repeated forte dynamics in the first fortissimo. Those are:

However, none of these make sense when you look at his other symphonies or his piano sonatas(which sometimes get that symphonic orchestral sonority). His fifth symphony has repeated sforzandos, similar to the repeated forte of the Beethoven's Ninth Scherzo, but with the s preceding the f, suggesting that the repeated forte dynamic isn't just a case of Beethoven forgetting to write the s.

Also, when I see repeated dynamics being used to indicate a more gradual change in dynamic, usually, I will see repeated piano for a diminuendo and repeated forte or sforzando for creschendo. For an example of this in Beethoven, look no further than his Piano Sonata no. 1 in F minor. In the first theme, there are 2 sforzando markings. These are generally interpreted as being a creschendo to the fortissimo at the end of the first sentence in the theme, not just strong, forceful accents within an otherwise quiet passage.

The third reason seems to be the most probable to me, but then again, his other symphonies clearly show that you only need 1 or possibly 2 fortissimo markings to sustain a fortissimo dynamic for a significant length. Here is the passage in question showing the repeated forte dynamics: 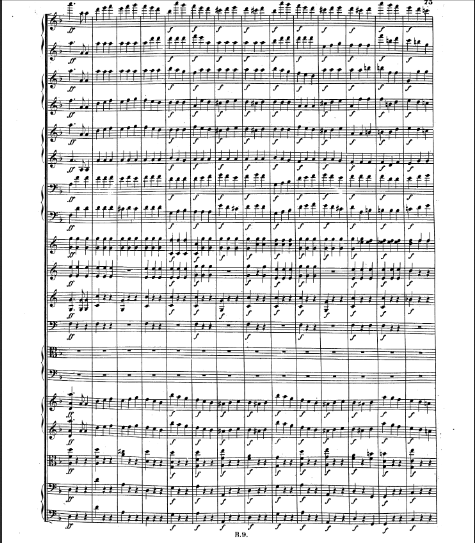 You can see that 4 bars into the fortissimo, the repeated forte starts. This repeated forte keeps going for 16 bars. That's about twice the length of the sforzando passage from Beethoven's Fifth. After those 16 bars, there is a fortepiano marking.

What is Beethoven trying to get across here with 16 bars of repeated forte dynamics in the first fortissimo passage of the Scherzo of his ninth symphony? Is it a sforzando? Is it telling the orchestra to sustain that fortissimo?

It's kind of obvious what it means: every bar starts equally loud.

That is not the way any human musician would have been be likely to play it, without the instruction. Bars usually combine into phrases.

At other points in the movement Beethoven explicitly writes "ritmo di tre battute" and "di quattro battute" when he doesn't want this effect.

3
Sforzando but fortissimo, how to fix that?
16
What makes a piece sound like Beethoven?
4
Did Beethoven really usher in the Romantic Period?
5
How is Beethoven able to make so many sudden shifts in key?
15
How do pianists reach extremely loud dynamics?
9
Why is Beethoven's tempo so off?
4
Does Sforzando really mean a stronger accent?
2
What besides a fast tempo is causing this Measure - Beat equivalence?
6
Is this fortissimo passage in the flute possible?
15
Dynamic marking "f-p"