Chords in tabs are wrong? 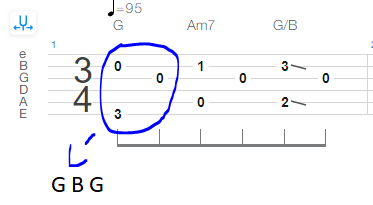 This song is Blackbird by the beatles

The first part is a G, but the notes come up as G B G, which do not form a G chord.

a G chord is made up from G B D, unless I am missing something here, or the tab is just wrong.

The second part as well, is an Am7, but aren't seventh chords made up from 4 notes?

Tablature does not indicate when to release a note, and usually stuff sounds best if you keep fingers set until the next harmony change. The chord symbols help in patterning the left hand work in a manner where this falls into place naturally.

So don't complain: you can always ignore the symbols. But they help a lot more often than they confuse.

Fifths are often omitted from chords. But in this case I think the chord forms listed above the notes is meant to be a guide rather than an analysis of the progression. It often happens in guitar arrangements that we are playing a couple notes (which do NOT form a chord) but those notes are most easily played when holding down a standard chord form. Those first three chords are all open string forms that many guitarists would know. Hence, grabbing that chord form would feel natural to the experienced guitarist. Without the indicated chord form the TAB would need finger markings (numbers to indicate which finger to place on the note). Without that a real beginner might have trouble. Even an experienced player might fidget around searching for the best fingering.

There's no rule - anywhere - that states what you say. True, a basic chord can have three notes - 1,3 and 5, but it's not compulsory to actually play all of them.

There are those who say two notes don't constitute a chord (power 'chord' here!) but sometimes the voicing of a chord means the 5th can be, and is, omitted. Partially this is because a harmonic of the root note actually makes the 5th audible. Another reason is that the root is needed - otherwise what chord is it - and the 3rd denotes major or minor. Whereas the 5th doesn't contribute a great deal.

So, playing a G note and a B note suffices.

Also true, Am7 is made up from A C E and G. Again, notes an be, and are, left out. Once again, it's the 5th. There's 1,3 and ♭7. Enough to establish, sonically, what's going on. And giving enough clues to be able to name that chord.

So, nothing in stone: it's what happens, no-one's breaking the 'rules' - 'cos they don't exist! 'Guidelines' is a more apposite term. And sometimes, what sounds good isn't as easily quantifiable as we would like it to be. That's music!

It's common to omit the fifth of a chord, like the D in G major, or the E in Am7.

Why can the fifth be omitted?

You can't omit it all the time. It depends on the chord type and very importantly the place of the root within the tonality.

All chords on the various roots in G major (G-E) are major or minor chords except the chords built on the root at the seventh degree of the scale (F#) which is a diminished chord.

The fifth of all those major and minor chords are perfect fifths whereas only the one diminished chord uses a diminished fifth.

From that info you can sort of say most chords in the key are assumed to have a perfect fifth. Only the single diminished chord needs to be confirmed by actually including the diminished fifth.

A more complicated view involves looking at chord inversions, voice leading, and common harmonic progressions in a key. That cannot be explained with just a few lines, but suffice to say that in the key of G major the two tones B and G can possibly be an incomplete G major chord or B minor chord. Adding the fifth would certainly clarify that. But, harmonic conventions work such that the two tones are most likely to be considered a partial G chord and confirmed more by the voice leading and surrounding harmony than the presence of the chord's fifth.

Some rule of thumb type guidelines:

To get an understanding beyond rules of thumb, you probably should study harmony and voice leading.

...aren't seventh chords made up from 4 notes?

This seems like this should get a specific response. It gets into the picky detail of definitions.

A chord is pretty abstract. Chords only become clear in actual music after harmonic analysis. Sometimes the chords are obvious, other times not. Various chord tone omissions and displacements may occur.

A triad is a chord with three tones. In one sense that is just a theoretical concept. A G major triad is the tones G B D. But in actual music there may be omissions and/or doublings. In three part harmony you might have the full three tones G B D, but frequently you could omit the D and still have three parts where a tone is doubled like G3 G4 B4 (the numbers are octaves to better show the doubling.)

A seventh chord is usually described as a four tone chord - a tetrad if you want to get a nerdy :-) - but another way to describe it is any chord with a proper chord tone a seventh above the root. In G major the two tones D and C could easily be considered an incomplete D7 chord, because with have a D root and a seventh above it. We don't absolutely need the third F# and fifth A, because the D and C alone match only one seventh chord in G major: D7. If the D and C move next to G and B it especially confirms incomplete chords D7 and G.

When people use these various terms there are often assumptions based on context. Someone reading the tab you presented might speak of triads and seventh chords - or present chord symbols - without mentioning incomplete chords or tones omitted.

'You don't say!' Same meaning as 'You do not say!' But the 'o' in 'do not' can be omitted with no loss of meaning. The 'n' and 't' can't be left out though, or we'd have 'You do say!' which means something quite different. It's a bit like that.

this song's chords are all plucked/picked, not strummed (besides, as others said, you can skip some notes that form any given chord), thus not needing some of the notes from the chords (which are implied through voice line or other instruments). the notes above the tab are merely indicative of the melody, not the guitar part (which are the numbers bellow). they probably sound ok-ish when played on a relaxed setting, but they won't sound good if you're trying to play along with the original song and trying to sound as them.

Not the answer you're looking for? Browse other questions tagged chords tablature or ask your own question.

1
How do you play these ukelele tabs?
6
Next step after learning piano chords
1
Will learning guitar tabs help me improve at learning other tabs/playing melodies?
3
How to play chords from a tab where a capo is used
1
Is there a constant relation between a song notes and its chords progression?
2
How to identify and name Full Diminished Seventh Chords?
1
Slash chords and notation for A/C (according to Haunschild Book)
1
Why do tabs show individual notes being played where the song seems to contain strumming?
2
Chords in tabs confusion