What is the effect/role of Syahi on the Tabla skins?

What is the effect of Syahi (the black metallic glue) in the middle of Tablas ?

What would happen to the sound if it was:

The player who had sold me one of his sets had told me that only experienced manufacturers could fix the Syahi dot when the Syahi is worn out.

But at the time he did not explain to me what was the effect, the purpose of Syahi on the sound of the Tablas.

I don't see other percussions using that technique, so I am very curious about it: what is the reason that made Hindis add this modification ?

The syahi lowers the resonance frequencies in the sound spectrum and brings them into a nearly harmonic relationship. There is a description of the acoustics of Indian drums in the book "Science of Percussion Instruments" by Thomas D. Rossing (World Scientific, 2000). Rossing describes the experiments by B.S. Ramakrishna and M.M. Sondhi at the Indian Institute of Science in Bangalore where they tested the sound spectra of a tabla with no syahi, half the syahi and the full syahi:

Sound spectra from the "din" stroke with no patch, with about half the layers in place, and with the finished patch are shown in Fig. 2.13. The differences are rather striking. The fundamental (01) mode has moved down in frequency from 295 Hz to 144 Hz, slightly more than one octave. The other modes have moved by varying amounts into a nearly harmonic frequency relationship. 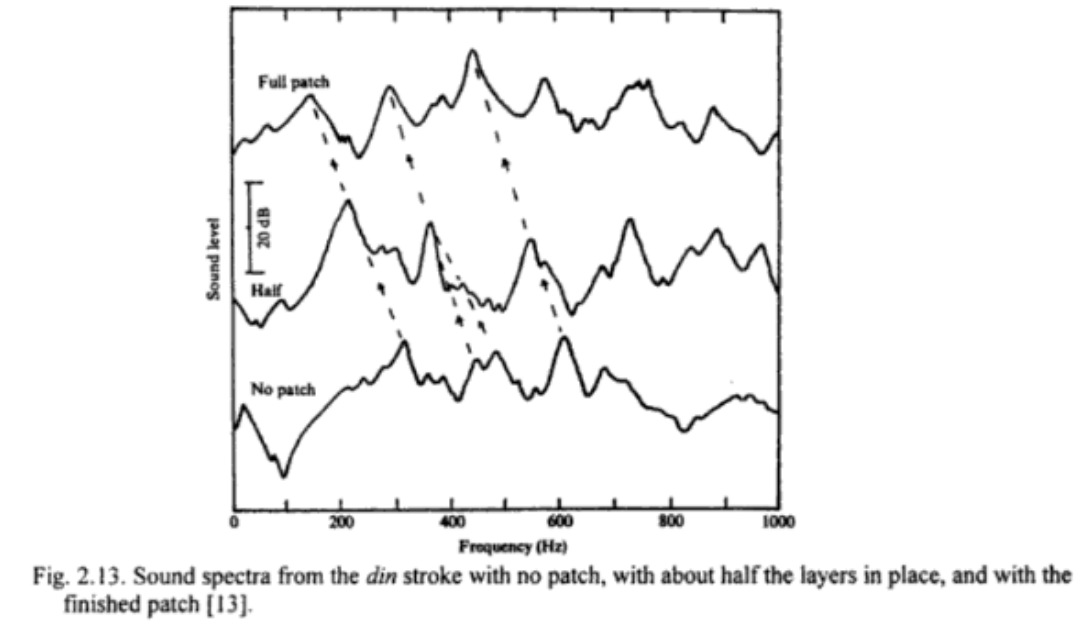 Applying the syahi is a highly specialized art. A finely ground mixture (syahi masala) consisting of of iron powder, glue, wheat or rice dough and charcoal powder is applied in thin layers and each layer is carefully polished with a basalt stone before it has dried. The patch tapers from the middle and is thinnest at the edges. The finished syahi layers are visible as concentric circles. 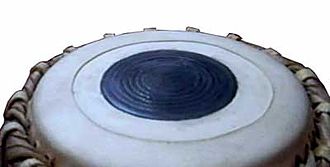 Just like for tuning a guimbarde, the maker is adding some wax on the moving part, making it a bit heavier, just like a spring mass system it will make the resonance frequency lower. This allows to tune the guimbarde to a chosen note.

I would guess the Syahi's goal is exactly: tuning. The more you have on the lower the note you get. Thus removing it you will get an higher pitch, and adding more you'll get a lower pitch, as the skin will be "heavier".

For worn skin, it is probable that they will more or less flexible than what it was originally. Just like for the spring, it will change the frequency of the note you get (say the resonant mode or fundamental), thus getting the Tabla out of tune. Adding or removing some Syahi will get back in tune by adjusting the mass of the skin, which is also influencing the resonant frequency of your system.

Just for precision: a spring mass system resonant frequency is given by:

with k the spring constant and m the mass. Thus, if you have a change in the skin (acting kind of like a spring) you can compensate it with mass to get the same frequency. Obviously, a skin is not exactly a pure mass-spring system, so the above equation is probably incorrect in the quantitative way… However, the physics is the same and thus the dependencies over the spring constant and mass are likely to be going the same way:

Not the answer you're looking for? Browse other questions tagged percussion tabla or ask your own question.

11
How to play Tabla in a music composition?
11
Should tabla drum produce any buzzing?
3
What acoustic percussion instrument sounds like handclaps?
3
What is the effect of “Conglomerising” your percussion?
5
Why does unpitched percussion play a less prominent role in classical music than many other genres?
1
Configure 4-4 Tabla for Bansuri Practice
3
What is a dotted quarter note, 100 BPM, with a triplet eight note pulse
3
Why does small tabla daaya breaks some time?