Notation for bowed instrument to play chord from high to low

On classical instruments like violin and cello a chord notated with three or more simultaneous notes is assumed to be bowed starting on the lowest string to the highest.

However, at times chords should be bowed in the opposite direction – starting on the highest string and bowing towards the lowest. Is there any standard notation to indicate this variant?

For arpeggiated chords there is a common notation: a standard low-to-high arpeggio is shown on the first chord here, while the arpeggio notation to play high-to-low gets an arrow at the bottom, as in the second chord:

Unfortunately, whether the line adjacent to a chord is straight or wavy, in classical notation it is assumed to be an arpeggio, not a chord. So my first inclination to use a straight vertical line with a down arrow would not be interpreted correctly.

A common notation in violin sheet music for chords to be played with the upper note first is a straight vertical line with a down arrow. Wavy lines are usually not applied.

The first one where the violin player has drawn a down arrow by hand.

The second one where the publisher has printed down arrows. 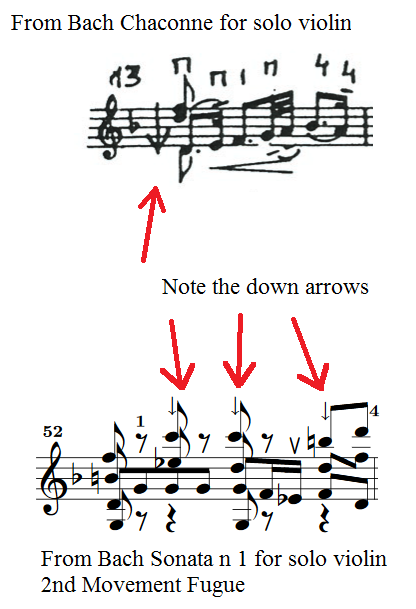 I would use the wavy line with the arrow on the bottom, as indicated on the second chord with the wavy line in your example. If you have notes on three different strings, they are going to be arpeggiated no matter how you notate it since it impossible to play all three strings exactly at the same time. You can get two notes at once, but not three. If you want a certain two sounded together, put an asterisk near that cord with some performance explanation down at the bottom of the page (and also as part of the front matter of your piece.) See the book Behind Bars for more detail.

I would avoid the use of the arpeggio symbol unless you want the notes played in sequence. If you are going for an "inverse triple stop," then you will have to write it out explicitly, showing whether to play the top two simultaneously then the bottom two, or play the top note followed by a low double-stop. That is, write eighth- or sixteenth-notes for the uppers and then finish the beat (maybe eighth or three sixteenths tied to a following quarter note, for example) with the lower notes.

So, think carefully about the sound you want to produce: is the top note appogiatura-like, or are you driving a chord progression down to lower notes? By comparison, a standard triple-stop is used mostly so the lower note(s) ring to support the upper note(s). There really is no musical (or mathematical!) situation where an upper note can "support" lower notes.

Not the answer you're looking for? Browse other questions tagged chords notation bowing violin-family or ask your own question.

11
What does 'on' mean in chord notation?
3
Chord notation for stacked and inverted chords or intervals?
13
“Correct” notation for a minor chord?
7
Notation for generic voicing
10
Is there piano notation for finger sustained notes (as opposed to pedal sustain)?
0
What does the caret symbol ^, mean in guitar tablature?
2
How to prepare to play bowed vibraphone?
2
What is the recommended notation for bowed marimba?
15
What does this wavy downward arrow preceding a piano chord mean?
13
How to transcribe an arpeggiated 4-note chord to be playable on a violin?