Help with analyzing sus and add chords in this progression

I have been trying to analyze a score (the first one that I have attempted) and I'm a bit confused about how to analyze these chords. Here's the part (and here's the full piece for context): 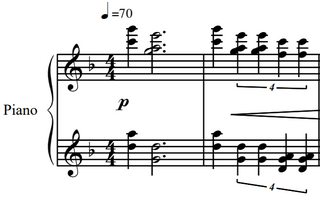 Take the very first chord: I have analyzed it as a D7sus4 but I'm not completely sure about how does that fit into the chord progression. The same with the second (A7sus4) and some others (F6/9, C6...).

Disclaimer: I have never taken formal lessons and I have little time to practice, so apologies if the question is too basic or plainly wrong. If that is the case, I would highly appreciate informative online resources. Thanks!

To start with, that quadruplet notation is ugly. I'm pretty sure it would be much better to write this rhythm by taking the three quarter notes and dividing them into four dotted eighth notes (tied and beamed appropriately). Tuplets could make sense, but only if the intended effect is to take the listener on a departure from the prevailing meter, which doesn't appear to be the case here (I haven't listened to the piece performed, though). Unless I'm sorely mistaken about the nature of the piece, the transcription wrote a tuplet for what should be a subdivision of the beat. It's a small distinction, but musicians will thank you for getting it right (well, no, they wont, but they will be ticked off if you mess this up, so same thing).

Another good reasonto stay away from the quadruplet in this case: the tuplet notation in the sheet music OP provided obscures the midpoint of the measure, which is generally bad practice (where the heck is beat 3?). With properly beamed/tied notes at the 16th-note level, it would be easy to see exactly where beats 1, 2, 3, and 4 all lie in the rhythm - the quadruplet makes it impossible to see these landmarks in the measure. This is just a way to make sight-reading easier, and it's the same principle as beaming conventions - show the divisions of the beat when you can!

On to the actual harmonies:

Without context, your D7sus analysis is correct, but in the context of the greater work (D minor, right?) it doesn't make sense to me to call this a D7 chord, because that would imply the major third. Yes, it's suspended, so the third is absent anyway, but from an analysis standpoint, this suspended fourth (G) is clearly a suspension of the minor third F, not F♯. I personally would call this chord Dm7sus, but this is also a pretty small distinction, since it isn't even reflected aurally until later context is given.

The second chord has G, D, G, A, and E in it, which you've labeled A7sus. This is not empirically wrong either, but it's not what I would label this chord as. I saw the G and D figure in the bass and took that to mean G was the root note, making this a Gm6/9 chord with no third. That, to me, is the best interpertation because the piece is so clearly in minor that this G chord must be a minor chord rather than a major one. This is a i iv i progression dressed up in fancy clothes, which is common enough in minor. And it's important to note the perfect fifths in the bass that create a sort of 'power chord' like sound - these are often just a way of putting a lot of emphasis on the root note, like when a pianist plays an octave in the bass but with a perfect fifth instead, or when a guitarist plays a heavy power chord on the root. This seems to be a much better explanation than an suspended dominant seventh chord in third inversion to me.

All in all, a valiant effort at analysis (as a first effort, especially), and nothing you did was strictly incorrect - it could well be that some people hear that music the way you analyzed it. That said, it will probably take practice to clue in to all the little nuances of deciding subjective matters like these above. Music theory is just that: Theory, and that's why computers can't do it for us. It's all about human perception, and that can mean tiny differences get wildly different interpretations. Keep up the good work!

3
Thoughts on Tuplets vs. Subdivision?

1
Identifying this chord (Fb Db F?)
3
How can one analyze this chord progression from "Vienna" by Billy Joel?
1
How can I analyze some parts of this excerpt?
4
How can the intro to the song "If I Fell" be analyzed?
0
Help analyzing a few bars in a piano piece
3
How would this chord from "The Chamber of 32 Doors" by Genesis be analyzed?
2
Why harmonize major scale with sus chords?
3
How can this chord from Rhapsody on a Theme of Paganini be analyzed?
5
Help me understand the chord progression in Tatsuro Yamashita's 'Sparkle'
6
Replacing chords with riffs