Can any song on guitar be played with standard tuning and without a capo?

Sometimes I see artists I like that either use weird tunings or a capo when they play a song. I don't feel like finding my capo nor changing from standard tuning. Is it theoretically possible to play any song in standard tuning without changing anything? My current hunch is yes but it might just be more difficult. Thoughts?

Your question is really two separate questions so I will answer them individually.

Question 1) Is it possible to play any song on guitar without using a capo?

The answer is yes (assuming both guitars are in standard tuning). A capo makes it possible to use the same chord shapes to play a song in a different key or use a different chord set to play a song in a particular key that you may not like the chords for. So if you want to play a song without a capo, but play along in the same key as someone using a capo, you would simply transpose the arrangement to match the key that results from playing the song with the capo. The chart below will help you figure out which key you will need to play in to match the key that is rendered by the capo. 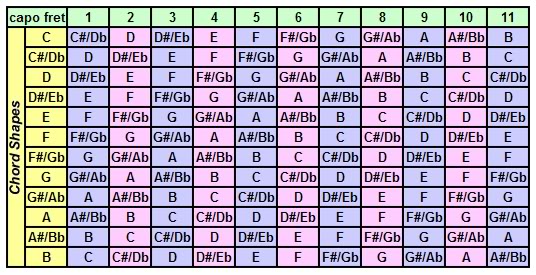 I will use an example to show you how to use the chart above to determine what key to play the song in with no capo in order to match the key rendered with the capo. Let's say you can see that the guitarist is playing the G, C and D and Em chord shapes. Since all of those chords would appear in the key of G major, it would be reasonable to assume that the chord set is derived from G major. If you see that the guitarist is using a capo on the second fret, go down the first column (yellow) and find G (the key from which the chord shapes used is derived) then follow that row over to Column 2 (because capo is on 2nd fret) and you will know that you must play the song in the key of A to match what you are hearing from the guitarist using G shaped chords with a capo on the second fret (A being a full step higher than G in this case).

You can use the information contained click here to convert the chord set from the capo chords to the corresponding non capo chords using transposition.

Question 2) Can any song be played on guitar with standard tuning?

But some alternate tunings may render chord voicings that might be extremely difficult to physically duplicate in standard tuning. I have seen guitarist who use open tunings where the pitch between adjacent strings spans quite a range. If you then play a chord shape where there is a wide spread between fretting fingers you could end up with a voicing that would require too far of a stretch in standard tuning to emulate.

It depends what you mean. If you mean play a recognisable version of the song, it's almost certainly possible without a capo or a particular tuning. If you mean getting it sounding the same without a capo or a particular tuning, then in many cases it may be difficult or impossible - the use of the capo or tuning may allow fingerings, chord voicings, and playing techniques that aren't possible without it.

I think the accepted answer is simply incorrect. It ignores the fact that any one of us can write a song that is impossible to play on the guitar in any tuning. For example just include notes out of range, etc.

All the open string chords can be played in a movable chord format. In such formats the index finger acts as a capo. Most players will be familiar with bar chords and that is the simplest example, E form and A form. But in fact the open string C, G, and D forms can all be translated up the neck without any trouble. For example, instead of playing the open C chord as (x, 3, 2, 0, 1, 0) where numbers are fingers not frets, play it (x, 4, 3, 0, 2, 0). the index finger rests over the nut. Sliding this up the neck will result in the chord (x, 4, 3, 1, 2, 1) spanning 4 frets. This is pretty easy to play without trouble and will never sound "out" due to an open string being out of key.

I've played in every key that exists in standard tuning with a variety of orchestras and bands and never needed a capo. That doesn't mean EVERYTHING is possible. If you are trying to arrange a piano piece or violin piece for guitar you will necessarily need to change what is written to make it playable. A piano player can play 10 notes at once (probably not often) and a guitarist cannot, unless they have a 10 string guitar and even then they are limited.

In closing I think your question is not fair, "play anything"... That is simply not possible. But playing "guitar" pieces or parts of a song in standard tuning w/o a capo is definitely possible.

The thing about capos and weird tunings is that the musician in question found it easier to play that song with the intended emotion with the tunings and capos.

Mostly, capos allow you to play open chords elsewhere on the neck. Could be to suit your voice. Could be to compensate for retuning; I used to see 12-string players tune to D and capo 2 so that the tension was lighter and Easter on the instrument.

Alternate tunings allow things that otherwise would be difficult. Take Richard Thompson's "1952 Vincent Black Lightning". The song has four chords — I, ii, IV and V — and Thompson plays it in CGDGBE, dropping the A to G and the low E to C. This allows Thompson to accompany himself while still being the guitar hero he was meant to be.

A recent cover has Sean Rowe playing the song, but more raw. Gone are the travis-picking flourishes. Is it the same song? Has it changed too much? It certainly doesn't have the low-C bass.

6
Is there a simple way to transpose a song from one key to another? What is the methodology?

4
String gauge, scale, and tuning relationship? (Guitar in particular)
2
Transposing a song for a desired vocal range and guitarist
3
Is there a tuning that gives open Maj7 chords?
1
Lead Guitar - Stay In Single Key
2
Is it “safe” to use a capo on every string but the E?
0
Tuning Guitar with Capo
4
Key of a song with capo on the 4th fret
0
if a song is writting in one tuning on guitar can it be then translated into standard tuning
6
High E String Buzzing Only When Picked Open
5
how to play capo and non-capo chords in the same song?