For some time I've been trying to understand modes. - I've read myriad posts, debates, and explanations, and have generally been left confused. But - I think I finally have a handle on it. Can anyone tell me if what I have below is correct, or incorrect?

What we call modes came from something called modal music. Most 20th century music, with the exception of some jazz starting in the 1950's is tonal, rather than modal music. For brevity, I won't discuss the difference, but I think it suffices to say that most current musicans don't need to be concerned with modal music. (I said MOST, not ALL.)

However - just because you're not playing modal music, doesn't mean you can't use modes! For most musicians, the 7 modes (Dorian, Mixolydian, etc.) can be considered scales which can be used (in the right situations), just like any other scale.

What is the best way to learn the modes, as used in tonal music? Just like any scale, they should be considered in the context of the harmony. But here I will only address how to best learn the fingerings of these scales, on guitar.

There is much more that could be said of course, but I want to keep it simple for those of us that are just starting to learn.

There are really only two ways to regard and understand modes.

One is, as you prefer, to consider each mode as a separate entity, with its own set of notes and flavour, and learn each 'scale' for each mode, which is then movable (on guitar especially) to start on each of the 12 different roots.

The other is to think about one particular major (in this case) key, and thus its scale notes. That's the parent key/scale, and the other six modes which it spawns are all using the same set of notes, but each with a different root. So once one has learned a major scale, one uses exactly the same notes, but starting on a different one from the original parent root. so Dorian will go from note 2 to note 9, so to speak.

I think anyone learning modes will find one better for understanding than the other - intrinsically, they're both valid, and once one has digested the one concept, it's easier, and worth while, starting on the other.

In German we have the to names for scales called:

May be the introduction of "relative names" could be confusing as you understand something different under relative, for this I write it italic. *1)

But this concept of movable do ("relative" -> that is referring to the root key!) is most useful to understand the modes:

there is a "relative" scale existing of 2 equal tetrachords wwh (w) wwh, note that the 2 tetrachords are separated by a whole step (tetrachord = 4 strings -> 4 degrees I ii iii IV - V vi vii I)

So you can make a scale of a movable do (do,re,mi,fa,so,la,ti,do) that you can underlay to every of the 12 keys: (sharp and flat).

the modes are nothing else than the 7 scales that we get if we begin with another root note of the do re mi.

finally this concept is quite similar to the intervals but it is historical derived from the church modes (middle age) and their root tones names that have been used since Guido of Arezzo.

As we first learn to sing with the do,re,mi (s. Aristocats) or baby songs and folk songs, it is very easy to apply this concept to a) to the 7 church ladders and then to all other 12 keys.

*1) I don't know if related or referring names would be less confusing?

Group together mode and key as types of tonalities.

Treat scale as tonleiter the German word for scale meaning tone ladder, all the tone of the tonality going up or down in step-wise order.

Mode can also have the meaning of the various rotations of a scale: ex. the seventh mode of the melodic minor scale is the altered scale.

Don't confuse mere scales with being in a mode. For example... 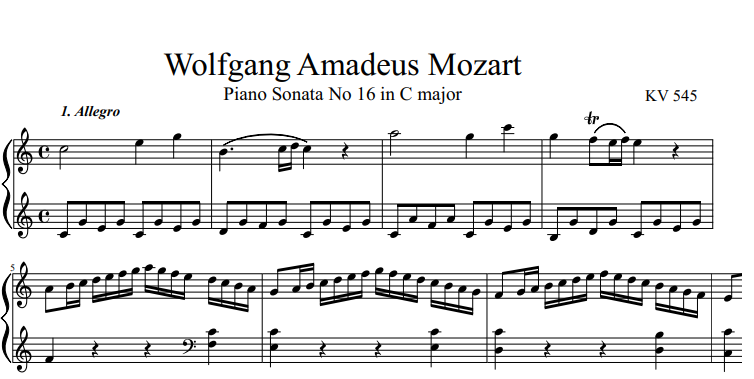 ...the music is clearly in C major. The passage starting at m. 5 is not the right hand playing in Aeolian, Mixolydian, and the Lydian modes. The mode of the music is not changing. It stays in C major. Describing the passage as a series of mode change really misses the point.

The series of scales is not about changing mode. It just a rhythmic elaboration of this... 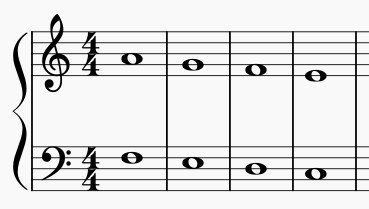 ...in terms of mode the passage is doing only one thing: affirming the mode is C major.

The main perpetrator of this way of thinking - scalar passages are actual mode changes - is probably the jazz "chord scale system". In that system when given a progression like Dm7 G7 C6 you are told to play Dorian, Mixolydian, and Ionian scales respectively over each chord instead of identifying C: ii V7 I and learning how to play a harmonious part over it.

I agree. A good way to conceptualize the modes is grouping them in major and minor families and then altering tones from so-called Ionian or Aeolian to get the other modes.

Most 20th century music, with the exception of some jazz starting in the 1950's is tonal, rather than modal music. ...most current musicans don't need to be concerned with modal music.

I think you should be careful here. Tonal just means music organized around a central tone. In the sense that modes have tonics, then modal music is tonal. Music with no tonal center is atonal.

I think current musicians DO need to be aware of modal music, because tons of popular and audience-accessible music is modal. Folk and Americana are heavily modal. Rock has important modal elements definitive of the style. Many essential jazz tunes are modal.

Reading between the lines, I suspect I come from a similar background to you -- jazz / rock / pop music probably played on guitar. I agree with pretty much everything you said.

For the likes of us (if I haven't misidentified you!) I think what you say here is the key:

The idea of "modality" arises when you notice a weird coincidence: the A Dorian scale ends up having the same notes as the G Major scale. This also means they contain the same intervals in the same order (but "starting from a different position"), and this means they probably share important sonic properties. But this is a matter of somewhat deep theory. It's not a helpful "short-cut" for students -- witness the approximately infinite number of internet posts from confused students who've been shown this too early -- and may or may not be of any practical value to a particular musician.

I studied jazz and rock guitar in the 1980s, when modes were all the rage. Your approach is the one I eventually arrived at, after some wasted time early on, and one I've seen widely advocated among modern guitar teachers.

(Note all this is ignoring the history, which supposedly stretches back through the medieval period to Boethius and ultimately the ancient Greeks. In reality, what modern musicians mean by "modes" is indeed mostly a 20th century invention. For example, it only becomes fully operational with the dominance of 12TET as a tuning system.)

Not the answer you're looking for? Browse other questions tagged modes or ask your own question.