What does tying an acciaccatura to the principal note with a slur imply?

Note that this is not a duplicate of this question, which asks for a grace note tied to the same principal note. This is more generally about tying grace notes (specifically acciaccaturas) to any principal note.

A slur can, in my understanding, mean two things:

I cannot understand how, at least in piano playing, either of these is not already implied by the grace note being an acciaccatura. That note is defined as an extremely short note, not long enough to warrant a specified duration, and it serves only to lead up to the note or chord it is attached to. It cannot exist without it.

And has anyone ever encountered a staccato acciaccatura? I personally have not in many of the piano compositions which are virtuous about tying every single grace note like this.

Even weirder, when the principal note is the start of a phrase, the acciaccaturas are often not incorporated in that phrase, but instead notated as a separate phrase. Like here:

Start of the second bar, you have the E which starts a phrase that ends on the next G. But the acciaccaturas for the E are slurred together as well - implying that they are part of their own phrase, yet it seamlessly connects to the next one?

And this slurring can also occur in the middle of a phrase: 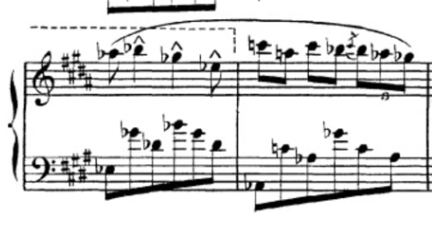 Not that I haven't seen phrases within phrases before, but I get the feeling that this acciaccatura slurring is a separate system.

I would love to find out how I am supposed to play a slurred acciaccatura, especially a single one which by definition has a minute duration and always leads seamlessly into the next, any differently from one that isn't slurred. Any examples, like performance recordings, are most appreciated!

Outside of that, I think it's simply tradition to use a slur to visually group the grace note in with the note it's decorating.

Not the answer you're looking for? Browse other questions tagged piano notation ornaments slurs or ask your own question.

12
How do you play a grace note tied to the same principal note?

17
How to play same note legato?
13
What does a mordent written to the left of a note mean?
6
How this legato is played in piano?
5
Understanding and distinguishing piano slurs and phrases
7
Lilypond acciaccatura slur position
6
Weird acciaccatura (?) notation in Chopin's polonaise
2
What is this type of ornament, and how should it be played?
2
Finally about different values of Acciaccatura (8th, 16th, 32th... grace notes)
2
Slurs and Finger Substitution