How can Alkan's Allegro Barbaro be and sound in the key of F major, when all the B's are natural?

I don't know much about chords and scales, so sorry if this question sounds misinformed. This just seems like witchcraft to me. Here's playable sheet music for this 1848 composition by Charles-Valentin Alkan: https://musescore.com/user/1795986/scores/731721

As you can see, the composition is mostly scale runs in octaves. Very Alkan! 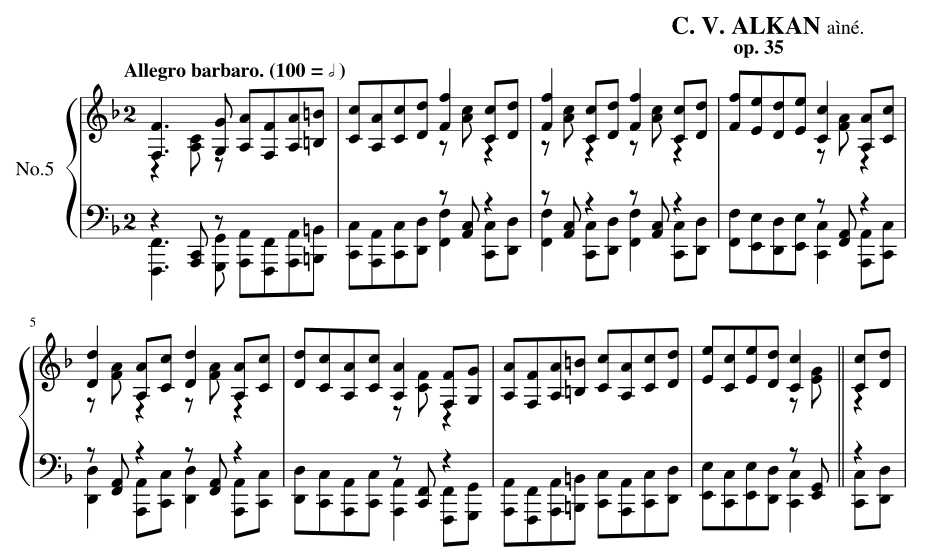 He never modulates anywhere, that I can tell. And yet there is not a single B flat in the entire piece. And doesn't just dodge them; all of his B's get naturals. This entire etude could have had a C major or A minor signature. Yet, the melody naturally lands on the F major chord, and I never get the feeling that something funky is going on harmonically. It is especially apparent in the final bar, where the right hand just plays every white key in a row - yet it ends on the F, and it sounds right!

Is there a name for this "fake F major" key? Or a technique that is consistently being used to avoid having to use a black key? I would love to know how this works.

This piece is in F Lydian. The Lydian is the fourth mode of the Major Scale: you can think of this as being the notes of any particular Major Scale but using the 4th degree as the tonic (root note). A simple example of a Lydian Mode would be the notes of C Major, but using the 4th degree (F) as the tonic. Coincidentally, this is exactly the mode used here. (It is also useful to think of F Lydian as being C Major notes from F-F, or as the Major Scale with a sharpened 4th degree. Either way of thinking is fine; they are different ways of looking at the same relationship to a Major Scale.)

Because a large amount of “traditionally” composed sheet music is not modal, but is instead based around one or more keys, it makes sense to use the key signature of the Major Scale of the tonic (F in this case), even though this piece is in F Lydian, not F Major. You’re right, this could be written with the key signature of C Major, but convention (usually) dictates that you allow the key signature to suggest the tonic note to the reader, even if this is “subverted” by the actual pitch material used.

I know this has already been answered and accepted but just for another perspective I think this actually is in F Major and not F Lydian. The composer is simply focusing on the dominant, C major, which has the B natural. It's extremely common for pieces to modulate to the dominant (V, C major) and this one just does it immediately.

This was a common Romantic and modern technique to give the piece an unstable or floating quality. The home key is barely present and when it finally resolves it is not as strong as normal tonic resolution. Many of his contemporaries did this. Chopin does this, as well as Liszt and basically all of Wagner's music.

Once in C, there're lots of V > I there, G7 > C. One of the contrasting sections is in a minor, which is the natural minor of C major, which is a normal progression for any classical piece, in terms of high level sections, I (F) > V (C) > vi/V (Six of Five, a minor).

Also, the real test is does it sound like a mode or does it sound like a major minor piece. I will admit it does have an unusual tonality and sound, maybe even modal at times, but it still mostly feels major minor to me. I would compare this this Mussorgsky's Pictures at an Exhibition, which are mostly modal and also sound very modal and this sounds nothing like that. It also doesn't sound or feel at all like Jazz.

I do agree that the composer was having some fun, and gave himself the constraint of not using Bb, but my opinion is that it is still in F major.

Not the answer you're looking for? Browse other questions tagged theory scales key or ask your own question.

0
When can changing key sound good?
2
is the definition of a natural sound adjusted by the key signature?
0
Being limited to the natural minor/major, relative minor/major and parallel key
4
How do you think of the natural minor scale (or any non-major scale), when you play it?
15
Which key are these notes and how to transpose it to the key of D?
1
How can I memorize all the notes in each usable key?
3
What are the differences between natural major, harmonic major and melodic major scales?
6
Can the key of a song be only major or natural minor scale?
3
How could you make a key change sound natural