Ties - is there a distinction between these two notes?

How would you play this? I think I generally understand how ties work but I'm a bit confused by the marked articulation. Would you hear a distinction between the two notes? 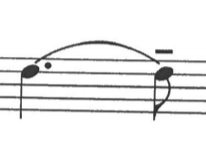 The tenuto mark is there to inform the player that the curve connecting the two notes is not a tie but a slur -- a bowing mark. This is two notes to be played without reversing the direction in which the bow is traveling.

In a piece for piano such a tied note with a tenuto sign doesn’t make much sense. Wood wind -, Brass- and String instrument could interprete this as legato and added tenuto eighth note: da-a-a daat.

But I assume this bow is not a tie but a phrasing bow.

The tenuto bar concerns how long you hold the complete note. It does not affect the tie. However, here are several indications that this is not actually a tie: first ties are usually much flatter and shorter. Second, it would be rather unusual to split a half note up in that manner unless the second of the tied notes falls on a strong subdivision of the measure (there is too little shown to know whether this is the case).

On instruments where the slur indicates some detail of technical execution, like on a bowed string instrument ("don't reverse bow direction"), a tenuto bar may indicate detachment, but only so if it is placed on the first of the tied notes. If that is done, most commonly the second of the tied notes also gets a tenuto bar when equal articulation of both notes is desired.

As written, and assuming a tie rather than a slur, the tenuto bar indicates how a note of four eighths of length is supposed to be articulated at its end.

Not the answer you're looking for? Browse other questions tagged notation ties or ask your own question.

8
Is there any difference between these two note values?
9
Are there any situations when one needs to make a distinction between slurs and ties?
4
Ties vs voices for notes of different length
4
Why do these notes have two sets of beams?
3
What is the correct way to divide notes?
2
What do I do if a fp marking is in between two notes?
16
Chord stretched across treble clef and bass clef
4
Figured bass and ties
3
Liebesleid (Love's Sorrow) - Kreisler (arr. Rachmaninoff), tie or slur?
4
Issue with notes going over the time signature