My Acoustic Guitar's Intonation is right in place for the bottom 4 strings, But the Top two are off. Octave is 50 Cents flat in B-string and 1 semi-tone flat in E-string.

Please Help. The Strings fairly new and I'd prefer to not take them off. Should I do anything to the Bridge Saddle? Or Should I put on all the Strings from the same set as G taking off the old strings? Or Is there a different solution?

Please don't close the question saying it has to be focussed, The only issue I have here is that the top 2 strings are not in right intonation and I'm listing all the observations I've made.

Edit: One common thing answers have suggested is going for a higher gauge at E and B. But I want to let you people know that I'm already at 0.12 to 0.14 Range. Is it plausible to go higher? with a Semitone Flat Octave?

Just in case this might help shape the answer more in context. The place where I am is on a LockDown for COVID-19 right now, So I can only wait or Do something with the existing things.

Intonation will only ever be exactly right when the saddle on the bridge has been adjusted for the particular string in question. Put a different gauge string there instead, and the intonation will be out. Change by .001" and you'd prbably shrug shoulders and live with it.

Whilst frets (generally!) are all parallel to the nut, the line across the saddles never can be. That's why Leo came up with separate saddles on his Strat, and Mr. Gibson used his 'Tunamatic' bridge. Even the three saddles on Teles didn't solve the problem - I had to re-profile mine for intonation on the top two strings.

Your top string being a semitone out at fret 12 means either the string isn't suited to the saddle position, or the saddle position isn't suited to the string gauge. Being flat means the saddle is way too far back - string's too long. If the bridge is fixed, it'll be a luthier job, so initially, I'd be going for a heavier gauge string, but that might need to be getting on for twice the diameter of the existing one. You may be going from, say, .009" to .014" - only a guess!

The second string is generally longer than the first, so maybe change for a slightly heavier gauge for that will suffice.

On a modern electric guitar, intonation is easy, since you can move the position of each string saddle independently. This adjustment isn't possible an acoustic guitar, which can lead to issues with instruments that are not well set up. Generally, if you know the string gauge and style that was originally on the instrument, staying with those choices will give the best results - an instrument built with heavier strings in mind will be hard to set up with really light strings, and so on. String gauge choice can impact other aspects of setup besides intonation (namely action, relief, and nut slotting) so regardless of intonation, it's best to stick with a given type and gauge of string unless you're willing to do a complete setup on the instrument.

But if you have an instrument that isn't intonated even with the "right" strings (or, at least, with the strings you want to use), all hope is not lost - you can still obtain some range of adjustment by modifying or replacing the bridge saddle. Most saddles are cut straight - the top edge of the saddle tapers to a gentle point that's usually on the center of the saddle. However, the width of the saddle provides some degree of adjustability - if the top edge of the saddle is shaped to slope towards the front or the back, you can effectively move the point at which the string breaks over the saddle forwards or backwards. Saddles shaped like this are called compensated saddles and they can be bought ready-made, or cut from a saddle blank. The following photo shows two straight cut saddles (the top two) and two different compensated saddles (the bottom two): 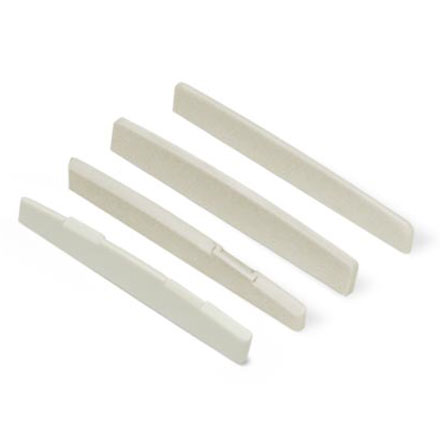 Not the answer you're looking for? Browse other questions tagged guitar acoustic-guitar maintenance intonation lutherie or ask your own question.