Does this progression have a name?

I discovered that if I play a major scale, i.e. Ionian mode, then move through the modes with the same root note in the following order:

At this point I'd next play the Lydian scale, but starting a semitone lower than the Ionian I started with earlier.

Then I'd finish on the Ionian scale starting a semitone lower than my original scale. I've sort of drifted downwards by a semitone. I've attached the snap showing what I'd play if I started in C major. But applying the same sequence of modes again means I drift down a semitone each time I reach the next Lydian scale.

I really like that each subsequent scale in the sequence of modes has one more flat than its predecessor.

Question is - what's the name of this progression? 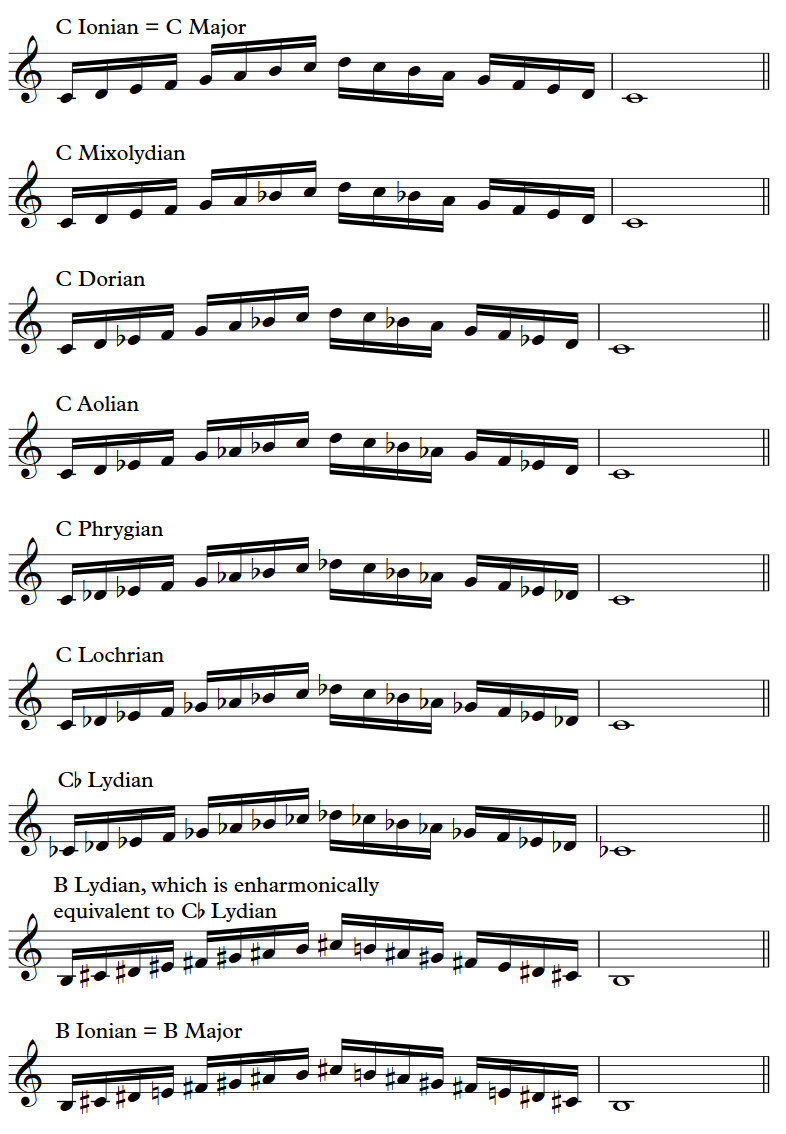 You have discovered they way I practice scales. If you are playing C mixolydian after playing C maj you are in the Key of F maj. C Dorian is Bb Maj, etc. You are changing key up a 4th each time you change modes like this, and as you discovered the pattern comes back to Ionian but a half step up from where you started. Keep going until you've covered the neck! I usually start on G.

I would not call this a progression but a sequence of key changes, following the circle of 4ths. This is a great way to play through keys on the guitar as it teaches you to stay in place through the change rather than jumping up half the length of the neck.

Not the answer you're looking for? Browse other questions tagged scales chord-progressions modes or ask your own question.

8
I am confused about modes. Can someone explain it in these terms?
4
How to learn the modes of the scales? And even worse, how to improvise over them over any key?
5
Why is it a convention to number modes by their tonic scale degree relative to ionian (major)?

6
How to master the guitar fretboard
7
Memorizing modes on guitar fretboard
0
Being limited to the natural minor/major, relative minor/major and parallel key
1
Understand this progression/harmony
3
Modal playing on an instrument designed for just intonation in the major scale (specifically dulcimer)
19
Exactly what does “diatonic” mean?
2
Are there modes beyond Lydian?
0
Can you help me understand what I am doing with these arpeggios?
6
Is there a theory of heptatonic scales with 1.5-step intervals?