Lydian Chromatic Concept theory - the root of 4th is its upper tone, but why not for the Lydian scale? 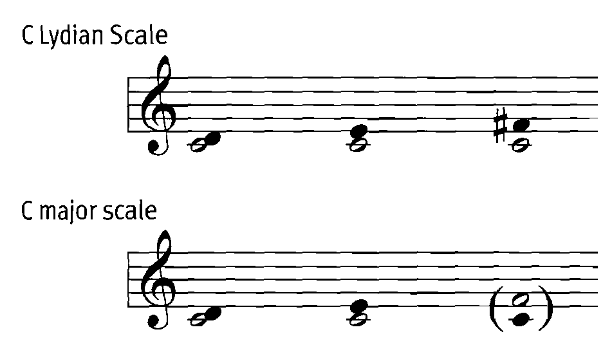 Short answer: in the case of C-F# both can be thought of as tonics, because the interval is symmetrical. The figure you quote shows that each sound of the scale CAN be interpreted as having tonic C, not MUST. Note that it's impossible to do the same for C-F, their only possible relation is with F as the tonic (in Russel's theory, of course).

Long answer: "pure" tonic is only defined for an interval of a perfect fifth. There is also a transitive dependency between tonics: when you have G (we mean the "pitch class", not a single pitch), then it's tonic would be C. But then C's tonic would in turn be F and its tonic in turn would be B flat. The implied rule is that you are not allowed to make more than 6 such jumps in a row, because by the 6th jump you already have a full scale.

So, if you have two sounds from the same scale and want to see which one is the tonic, you need to see which one is reachable from the other in 6 or less perfect fifth jumps down. When you try C and F you will see that the only possible way is to start with C and make a single jump down (you would need 11 jumps down from F to C). This makes F the tonic. With F# and C, you can begin with F# and you will reach C after 6 jumps. Or you can begin with C, and you can reach F# in exactly the same number of steps.

Intervals are always calculated from the lower note.So if an interval has C ♮ as its lower note, so e it. The interval is worked out from C>F♯.

It doesn't matter a jot if 'C Lydian' is involved. If someone is calling it 'C Lydian' (mode), then the root will be C. It certainly is the lower note. F♯ is the other note - certainly not the root or tonic. No sense there! Either you've quoted incorrectly, or the site (like too many others) contains someone's lacking knowledge. Where's it from?

I have never heard of this notion of the topmost note of a fourth being the tonic of the interval, much less intervals having tonicity whatsoever (that only applies to scales). However, I can try to break down why you may think this way, or why you were taught this.

I think the confusion lies in the understanding of tonic. The reason that you may consider the top note of a fourth interval a "tonic" would be because a fourth is just an inverted fifth, which is a much more common interval to resolve on. For example, if a song resolved on the interval G-C, that is a fourth, but since that is essentially an "upside down" fifth, we hear it as resolving in the key of C, and not G. C is the topmost note of that interval. As C is the tonic of the C scale (the mode is irrelevant), and we just established that we are in C, C could be called the tonic of the interval.

It should be made clear that this is not common practice, to my knowledge. I have never heard this being used and I would strongly advise not thinking in this way. However, for the sake of answering the question, I will continue using your terminology.

Let's think about the C major scale. Regardless of what interval you play, C is always the tonic. That's just how scales work. The tonic is always the first note (and namesake) of the scale. Using the logic we used previously, if we were to resolve on a C-F interval, the implied key would be F (any mode but Locrian). So in that sense, sure, F could be the "tonic". However, this completely disregards all the context that the actual key is C, making this a completely flawed way of understanding intervals.

The key you are in C, so it does not matter what interval you play; the tonic will always be C. This doesn't matter for Lydian, Aeolian, Mixolydian, whatever. If the first note of the scale is C, the tonic is C. Any tonicity you may apply to intervals based on the logic we used earlier holds no significance, as that simply isn't how intervals work. Wherever you had learned this is either teaching incorrect information, or has some roundabout approach to theory that I am not grasping the essence of from your question.

Not the answer you're looking for? Browse other questions tagged theory lydian-chromatic-concept or ask your own question.