Why is the false relation of the tritone objectionable in V-IV but less so in IV-V?

In strict counterpoint, it is forbidden to have a B in one voice and then, in the very next chord, an F in another voice, or vice versa. This is called the false relation of the tritone.

George John Bennett, in his Combined and Florid Counterpoint (p.7), cites this as a reason why one shouldn't move from root position triad V to root position IV. Fair enough. But why does this author not mention the reverse progression IV-V, which also involves the tritone? Is this to be considered an exception, on account of IV-V being a very ordinary progression in tonal harmony? Or is root position IV-V altogether out of the question in strict counterpoint?

My Piston Harmony mentions the rule only in regard to V to IV. Kostka/Payne doesn't appear to mention it at all. That description on p.7 of Bennett doesn't seem to give much of an explanation.

This description from Schenker (my first time reading it) seems clear in what the concern is... 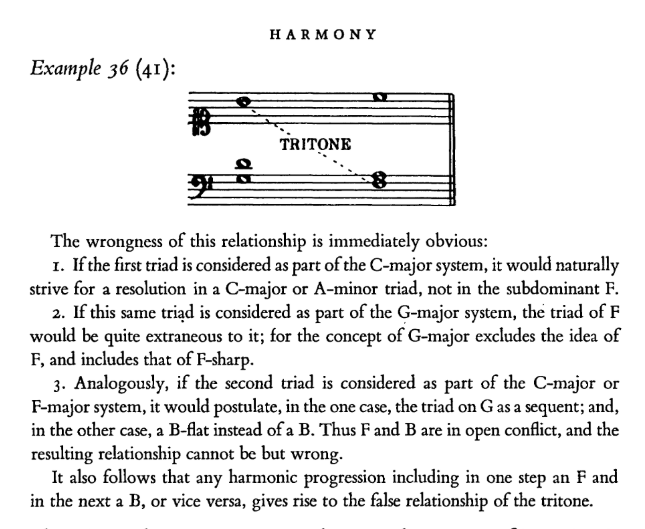 I'm not very familiar with German theory so the reading is a bit tough for me. But the basic gist I get is: you don't cadence on the subdominant. You cadence only on the tonic or dominant. In German theory vi has a "tonic" identity which in the theory familiar to me is called a deceptive cadence.

It seems important to point out that Piston and Schenker both illustrate the false relation of the tritone as a progression of ^7 to ^4 in the outer voices of soprano and bass. Piston specifically shows the progression as acceptable if one of the tones is in an inner voice. Both Piston and Schenker show the ^7 in the soprano moving to ^1.

Another way to think of it is: how to harmonize ^7 to ^1, the leading tone moving up to the tonic. If we consider the basic harmonic implication of that melodic movement to be V to I, then harmonizing the second chord as the subdominant IV sort of contradicts the basic idea of resolution inherent in ^7 to ^1, a resolution to the tonic.

If the harmony is reversed, we aren't just changing the order of two chords. We are change the chord to which the music resolves. Moving ^1 to ^7 is a resolution to a chord harmonizing ^7 which will be a chord of the dominant V. The ^1 can be harmonized as tonic or subdominant (ex. I or ii6/5) it's harmonization is flexible, because we aren't cadencing to it.

Piston specifically illustrates root position IV to V in voice leading for all three voices moving with ^1 to ^7 in the soprano. Of course that means ^4 is in the bass followed by ^7 in the soprano. So, at least according to Piston, the rule does not apply vice versa. The order matters.

This rule has always frustrated me. I don't understand why it's called false relation of the tritone when Piston shows an acceptable example of this tritone relationship in the outer voices in IV to V. Clearly the problem is not simply any tritone between outer voices. And the problem isn't about root position chords moving by step. It seems to me the rule is more like: don't harmonize ^7 (leading tone) to ^1 as a retrogression. I think Schenker's description is clearer in that regard.

Schoenberg writes of strong, weak and superstrong progressions. Strong is up a 4th or down 3rd, the opposite, weak progressions, are up a 3rd and down a 4th, and superstrong are adjacent chords a 2nd apart. Superstrong progressions are used sparingly. And from what appears in Bach, almost exclusively up a 2nd. Therefore IV-V is acceptable, and V-IV is in a sense superweak. Bach uses a bass from V-IV but will use the dominant chord in 3rd inversion, so as to make use of the 5-4 baseline but not the weakness of a 5-4 progression. This is the bppint of cadences. As for the exact reasons, I would infer that a weak progressions with a questionable voiceleading is 2 wrong at same time. The strong perfect cadence covers for trhe effect of the tritone. My opinion.

I'd like to give a historical account of this, where the question becomes "under what conditions did cross relations of the tritone become permitted?".

The wider definition of false relations comes from any perfect interval which has been augmented or diminished, although this type of false relation "of the tritone" is listed under "Mi contra Fa" by many of the older theorists, and quoted in Grove. As defined by Gioseffo Zarlino (1558) in Le Istitutioni Harmoniche (Book III Chapter 30) this includes the tritone (both in its original augmented fourth form as well as its diminished fifth form) as well as the augmented and diminished octaves.

Parallel major thirds (and parallel minor sixths) are particularly problematic because of this, and Zarlino suggests avoiding all such progressions in compositions of two voices (III.31). However, in compositions of more than two voices, he argues that just as there are in medicine "deadly ingredients which in combination with other substances are healthful", so in music, "there are intervals and relations that give little pleasure in themselves, but have wonderful effect when combined with others."

Interestingly, the outlined / diagonal tritone was more directly criticised than the simultaneous tritone in late Renaissance theory, specifically allowing for the diminished fifth as a vertical interval even in two-part harmony.

This difference in treatment between the vertical tritone and the diagonally adjacent tritone comes to the fore in the baroque - in an analysis from c. 1700 of Lully's Proserpine, vertical tritones resolve very differently from other dissonances, and at one point states that a vertical tritone "moderates the inharmonical relation" of a diagonal tritone!

Indeed, Zarlino himself is inconsistent with his own rules, including writing tritone cross-relations between tenor and bass. This appears to be related to cadences in his examples: where from a functional harmony perspective we would see dominant to tonic functions, Zarlino would see a leading tone moving to its final with an appropriate(ly prepared) dissonance over the tenor clause. Cadences with such dissonant suspensions (which at this point includes the perfect fourth) are given their own category by Zarlino, a cadenza diminuita (Book III Chapter 53).

The idea of the elaborated cadence accepting such dissonances is carried forward in late 17th century and 18th century treatises, under various names (cadenza composta, cadentia ligata). It is this contrapuntal dissonance that defines such a cadence: an admission and acceptance of dissonance (including, indeed especially tritones) in cadential contexts that we would now see as IV-V or ii-V harmonic progressions.

However, non-cadential progressions did not gain the license to be so liberal with their dissonances, whilst cadences became the "instigation and release of tension by means of dissonance" with the rise of harmony-based thinking after Rameau. As V - IV was vanishingly rare in cadences, even in "evaded" ones (now called "interrupted" cadences), older guidelines persisted from earlier considerations of tritone dissonance, and also served to "justify" the salience of the tritone's value in cadential harmony as opposed to non-cadential progressions.

Not the answer you're looking for? Browse other questions tagged harmony species-counterpoint or ask your own question.

7
Relation of the diminished chord to the circle of fifths?
4
What do the terms "pitch relationships" and "vertical dimension" signify in relation to harmony?
5
Do we hear bass/baritone solo melody lines as being implicitly "on top of" the accompaniment, for harmonic purposes
8
How to make the dominant preparation less boring?
1
Tritone substitution in minor, just change the root or change the chord quality too?
5
These two phrases use exactly the same notes, but one sounds major, the other minor. Why is that?
1
Why does the relation between E major and Ab major feel especially connected?
2
Why do open voicings of chords sound less dissonant/more harmonious?
1
Was the picardy 3rd used to avoid the leap in the resolution of the tritone?
6
How can I modulate the distance of a tritone using 3 secondary dominant chords?