Using this piece as en example, what clues should be used to determine its mode and tonality?

What mode or scale/tonality is used in this piece? What method should one use in order to answer this question? Is it modal or tonal? 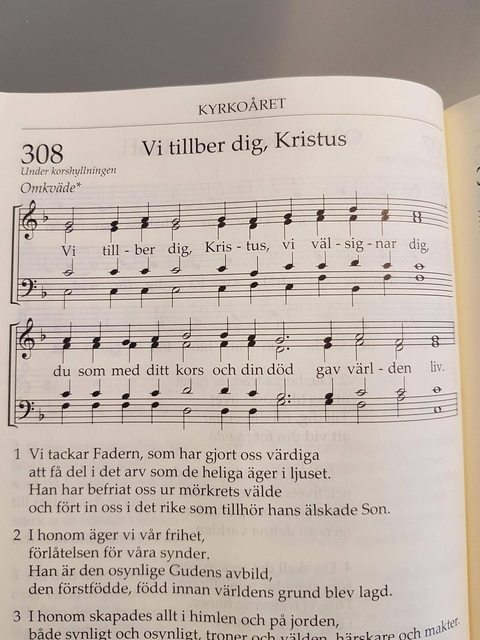 Given a key sig. of one flat, that says it uses the notes from the F major scale. No accidentals, so no distractions.

It starts and finishes on a C major tonality, so the fifth of F is where we find that. The fifth mode of key F is Mixolydian, so it's in C Mixolydian.

What tells the signature?

Mind that the last flat of the key signature is always Fa. As we have only 1 flat: Bb = Fa

If the final chord is F and also the melody closes on F this song would be in F major (but exceptional beginning with a dominant chord.)

The modes are built on the scales do re mi fa so la. Each of these tones is the root tone of the specific modes.

The tune of this begins and ends on re and ends on Re (as far we can see, because you don’t show us the final chord.)

Re would be dorian, if we had only the melody and the finalis is G we could say: the tune is dorian.

The repercussion tone would be D but it doesn’t look like this.

And the harmonization is like Tim says built on C, this would be mixolydian. In this case we should expect that the finalis is C.

Actually it looks and sounds rather as a responsorial prayer between a song or part of the sermon and not like a song itself, because of the feeling of the dominant chord (C) at the beginning, the first phrase ending in F (first line) and the dominant C (end 2nd line).

Probably someone will say this exactly is the effect of the mixolydian mode.

Ecclesiastical tunes are typically categorized by the melodic mode. Since the music that is shown is the refrain of a hymn or metrical psalm, I presume that it is sung last and that G is the final note. Assuming a final of G, the piece is in G Dorian. We can rule out the other three ecclesiastical modes because Lydian and Mixolydian have a B natural, while Phyrigian has A flat.

It is not unusual for the melodic final to be harmonized as the third or fifth of the final chord. Examples of this may be found in the music of JS Bach, although his style is not generally diatonic as is this harmonization, which harks back to the metrical psalm harmonizations of the late renaissance.

The cadential formula in this melody is A-F-G, all whole steps. To make a common-practice harmonization with an authentic cadence (i.e., a penultimate D major chord), it would be necessary to alter the melody, robbing it of its Dorian character. A standard plagal cadence would have a penultimate C major chord, and neither A nor F is present in that chord. This helps to explain the decision to cadence on C.

There is a case to be made, as others have done, that the piece is harmonically in C Mixolydian, but I disagree on melodic grounds. I would analyze it as G Dorian, ending on a IV chord.

(While a single flat in the key signature and a final of G would normally mean that the piece is in G Dorian, B is frequently flatted in Dorian mode, and this is sometimes reflected in the key signature. That is less likely in a modern edition, but if the verse of this piece ends on D then the piece could be in D Dorian.)

10
Using modes and static harmony
2
Philosophy about relatives and parallel keys in modal context
7
2-5-1 Jazz progression and modes
2
What counts as tonal music?
4
What mode is this plainchant melody?
2
Analysis: How to determine what scale/mode a score uses
0
A natural minor scale with raised fourth
2
What scale or mode is this?
1
What characteristics of a piece contribute to defining its tonal centre?